Casa de las Américas at 60: Reflections on Its History, Impact, and Future 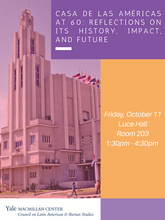 Building on the opportunity provided by the 60th anniversary of the founding of the Cuban cultural organization Casa de las Américas, this workshop seeks to promote a scholarly exploration of the history, cultural and social impact, and future of Casa de las Américas. Founded by the Cuban Revolutionary government in 1959, Casa de las Américas soon became one of the major forces that propelled the Latin American literary “Boom” of the 1960s and 70s. Through conferences and symposia held in Havana, and most notably in its annual international literary prizes, which featured as judges not only Cuban scholars and intellectuals but also prestigious artists and writers of the Latin American left, Casa de las Américas spearheaded a highly effective program of cultural outreach with Latin America aimed at countering Cuba’s isolation from the rest of the Americas by the U.S.-sponsored commercial, economic, and financial embargo that began to be fully enforced in 1962. Most scholars agree that the Casa de las Américas prizes in literature helped shape the contemporary canon of Latin American literature by promoting the prestige of Latin American authors who would go on to become major figures in the region’s literary and intellectual life: from “Boom” authors such as Julio Cortázar, José Donoso, Carlos Fuentes, Nobel Prize winner Gabriel García Márquez, and Nobel Prize winner Mario Vargas Llosa, to recent authors such as Argentina’s Samantha Schweblin, Brasil’s Rubem Fonseca, the Dominican Republic’s Marcio Veloz Maggiolo, and Mexico’s David Toscana, among many others.

Literature has not been Casa de las Américas’s sole concern; its growth and development over the years led to the creation of a series of “departments” focusing on areas such as theater, visual arts, and music, as well as fields of study such as the Caribbean, women in the Americas, the Americas’s African heritage, indigenous peoples of the Americas, and USA Latino studies. Sometimes idiosyncratic, always political, with bright and dark periods in its history, the story of Casa de las Americas mirrors that of Cuba itself and although its relevance has fluctuated over the years, the institution has remained a constant presence in contemporary Latin American culture. Participants in this workshop will include scholars and writers from both Casa de las Américas and from the U.S. academic community.