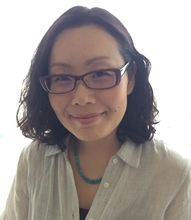 In early-nineteenth-century Japan, before the advent of mechanical recordings of sound and images, music and famous lines from the stage circulated widely in woodblock print. These printed invocations of performance—including everything from kabuki plays to popular songs and street shows—played an instrumental role in organizing the visual and auditory properties of early modern prose fiction, especially popular genres of illustrated fiction. In this talk, I examine soundscapes relating to the kabuki and other theater genres that were called up through both the text and the pictures in works of illustrated fiction, showing how they contributed to the construction of a sort of virtual experience of the theater, and how they inserted an auditory register into the process of textual consumption. By examining this history, I hope to bring the study of early modern print culture into communication with thinking about modern technologies of sound recording.
Satoko Shimazaki is associate professor of Japanese literature and theater at the University of California Los Angeles. Her research focuses on early modern Japanese theater and popular literature; the modern history of kabuki; gender representation on the kabuki stage; and the interaction of performance, print, and text. She is the author of Edo Kabuki in Transition: From the Worlds of the Samurai to the Vengeful Female Ghost (Columbia University Press, 2016), which was awarded the John Whitney Hall Book Prize and honorable mention for the Barnard Hewitt Award for Outstanding Research in Theater History. She also has a joint appointment as associate professor at Waseda University in Tokyo.