From Mao to Market: New Data, Methods, and Perspectives on China’s Economic Transformation, 1969–89 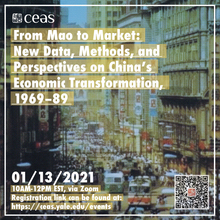 Official narratives of the origins of China’s economic transformation have focused on elite politics, state policies, and the leading role of rural China. As the narrative goes, China’s transition from Mao to Market was shaped by the interaction between the top-down policies of the Deng Xiaoping faction, the agency of local reformers, and rural entrepreneurship. However, as researchers have shifted their focus from official documents and memoirs to newfound sources— especially oral history, grassroots bureaucratic archives, and private life documents like family letters— they have begun to offer new perspectives on China’s economic history in the 1970s and 1980s. Research based on these new sources has challenged the official narrative on two accounts. First, there was a stronger continuity between the Maoist period in the 1960s and 1970s and the economic reform era of the 1980s and 1990s – in terms of the underground market economy, the service sector, the mediating role of Hong Kong, and structural changes in the household economy. Second, the dynamism behind China’s economic transformation came from all corners of society and the economy: the service sector, urban entrepreneurship, household economy, and the intellectual and educational exchanges between China and the West.
Gavin Healy, “To Serve the Tourists is to Serve the People: From Chairman Mao’s Revolutionary Diplomatic Line to Mass-Market Tourism”
Peter E. Hamilton, “The Revival of Business and Management Education in 1980s China”
Adam Frost, “Illicit Entrepreneurship in Socialist China”
Yanjie Huang, “Origin of the Xiaokang Society: Household Economy, Popular Sentiments, and Ideological Shifts in Shanghai, 1969-1980”