New Trends in the Study of Postwar Japan 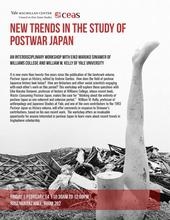 It is now more than twenty-five years since the publication of the landmark volume, Postwar Japan as History, edited by Andrew Gordon. How does the field of postwar Japanese history look today? How are historians and other social scientists engaging with each other’s work on this period? This workshop will explore these questions with Eiko Maruko Siniawer, professor of history at Williams College, whose recent book, Waste: Consuming Postwar Japan, makes the case for “thinking about the entirety of postwar Japan as one coherent and cohesive period.” William W. Kelly, professor of anthropology and Japanese Studies at Yale, and one of the core contributors to the 1993 Postwar Japan as History volume, will offer comments in response to Siniawer’s contributions, based on his own recent work. The workshop offers an invaluable opportunity for anyone interested in postwar Japan to learn more about recent trends in Anglophone scholarship.
Eiko Maruko Siniawer, Professor of History at Williams College, specializes in the history of modern Japan. Her first book (Ruffians, Yakuza, Nationalists) examines issues of political violence and democracy through a focus on violence specialists, or the professionally violent. The book explores the ways in which ruffianism became embedded and institutionalized in the practice of modern Japanese politics and argues that for much of Japan’s modern history, political violence was so systemic and enduring that Japan can be considered a violent democracy.
Her second book (Waste) is about conceptions of waste and wastefulness in Japan from the 1940s through the present. By considering shifts in what was considered to be waste and wasteful (be it resources, time, or material objects), her work explores people’s struggles to find value, meaning, and happiness in a post-industrialist, capitalist, consumerist, and affluent Japan.
William W. Kelly is professor emeritus of anthropology and the Sumitomo Professor Emeritus of Japanese Studies at Yale University. One of the themes of his research and writing has been the significance of sport and body culture in modern Japan. In recent years, with support from the Council on East Asian Studies, he has edited a trio of books on This Sporting Life: Sports and Body Culture in Modern Japan (2007), The Olympics in East Asia: The Crucible of Nationalism, Regionalism, and Globalism (2011), and The New Geopolitics of Sport in East Asia (2014). In 2018, University of California Press published his The Hanshin Tigers: A Professional Sportsworld in Modern Japan.
Kelly has long been committed to US-Japan educational exchange and in 2009, he was awarded the Order of the Rising Sun, Gold Rays with Neck Ribbon, by the Japanese government. During his 38 years at Yale, he received three awards for teaching, the McCredie Teaching Award for Information Technology in Teaching in Yale College (2004), the Harwood F. Byrnes / Richard B. Sewall Teaching Prize for distinguished teaching in Yale College (2011), and the Graduate Mentor Award in the Graduate School of Arts and Sciences (2013).