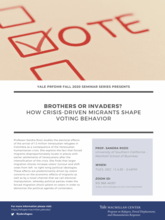 Professor Sandra Rozo studies the electoral effects of the arrival of 1.3 million Venezuelan refugees in Colombia as a consequence of the Venezuelan humanitarian crisis. She exploits the fact that forced migrants disproportionately locate in places with earlier settlements of Venezuelans after the intensification of the crisis. She finds that larger migration shocks increase voters’ turnout and shift votes from left- to right-wing political ideologies. These effects are predominantly driven by voters’ concerns on the economic effects of migrants as well as by a novel channel that we call electoral manipulation, whereby political parties make the forced migration shock salient to voters in order to demonize the political agenda of contenders.
Professor Rozo is a development and labor economist working at the Marshall School of Business at the University of Southern California (USC). Her work focuses on firms’ decisions, forced migration, diversity, and crime. One strand of her research explores how firms’ decisions change with economic and political shocks. Some of her work studies how firms cope with violent crime in Colombia, refugee migration shocks in Middle East, and higher diversity in the United States. Another strand of her research explores the effects of forced migration in hosting economies. Some of her work explores the effects of Syrian refugees in Jordanian’s consumption decisions and the impacts of Venezuelan migrants in voting behavior in Colombia. Professor Rozo also has other ongoing research projects that study the effects of crime and conflict on economic activity.