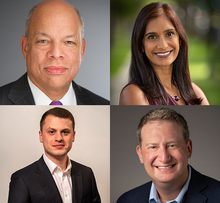 The Jackson Institute for Global Affairs will host an online discussion with Yale alum and author David Shimer about his new book, “Rigged: America, Russia, and One Hundred Years of Covert Electoral Interference.”

Shimer is pursuing a doctorate in international relations at the University of Oxford as a Marshall Scholar. His reporting and analysis have appeared in The New York Times, The New Yorker, and Foreign Affairs. He is an associate fellow of Davenport College at Yale University, where he received his undergraduate and master’s degrees in history.
Johnson is a partner in the law firm of Paul, Weiss, Rifkind, Wharton & Garrison, LLP and the former Secretary of Homeland Security (2013-2017). Prior to becoming Secretary of Homeland Security, Johnson was General Counsel of the Department of Defense (2009-2012). In that position, Johnson is credited with being the legal architect for the U.S. military’s counterterrorism efforts in the Obama Administration. Earlier in his career, Johnson was General Counsel of the Department of the Air Force in the Clinton Administration (1998-2001), and an Assistant United States Attorney for the Southern District of New York
The event is free and open to the public. Registration via Zoom is required.