Twilight of Democracy: The Seductive Allure of Authoritarianism 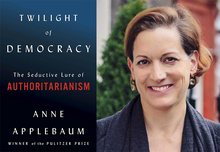 Why is liberal democracy under siege while different forms of authoritarianism are on the rise? How do we counter the allure of nationalist authoritarians at home and abroad?
The Jackson Institute for Global Affairs will host an online discussion with Anne Applebaum about her newest book, Twilight of Democracy, which explores why so many people across the world have abandoned liberal democratic ideals in favor of strongman cults, nationalist movements, or one-party states—including in the United States.
A Yale alum, Applebaum is a Pulitzer-prize winning historian and staff writer for The Atlantic.
The discussion will be moderated by Tamar Gendler, Dean of the Faculty of Arts and Sciences, Vincent J. Scully Professor of Philosophy and Professor of Psychology and Cognitive Sciences.
The event is open to the public, but advance registration is required.
The event will be recorded. A link to the video will be posted to Jackson’s website:
https://jackson.yale.edu/jackson-virtual-event-recordings/