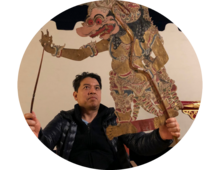 Dalang Darsono Hadiraharjo has chosen a lakon (plot structure) which specifically addresses the issues of deforestation and the environmental issues so pressing in Indonesia today. Javanese wayang performance has a multifaceted role in Java; embodying artistic and spiritual practices and values, providing entertainment and engaging society with current events through critical social commentary. With F&ES students of the Yale Community Gamelan, Darsono intends to create an artistic and educational wayang performance.

Accompanied by the Yale Community Gamelan Ensemble, and students of Culture and Performing Arts of Central Java, Music 233

Darsono has identified three scenes to bring in dialogue and conversations about environmental issues, creating opportunities for F&ES/ gamelan members to share their research. Peter Ludwig will be sharing his stories and research on Javanese gamelan instruments and resources for the craftsmanship of these instruments during the gara gara scene. This will most likely be delivered as a dialogue between Punakawan characters (comedic, but also descendants of gods) and Peter. Another scene will involve a research topic by Andy Lee, who will focus on the issues of deforestation and its impact on feline species in Southeast Asian regions. Guest speaker, Professor Michael Dove will address some of the issues surrounding deforestation in Indonesia and its effect on the society, communities, history and environmental policies throught the voice of Yudhistra who advises Bima in the lakon to stop getting rid of the forest.