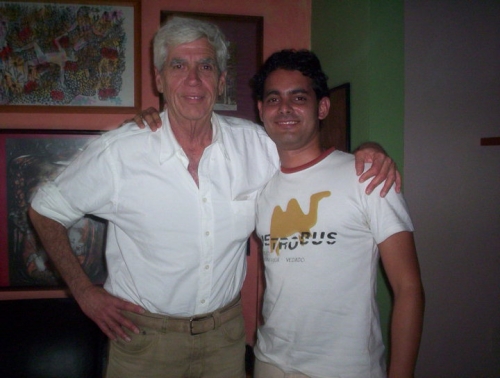 Margherita Tortora, Founder and Executive Director of the Latino & Iberian Film Festival at Yale (LIFFY), recently sat down with Carlos Barba Salva, an award-winning Cuban filmmaker, to interview him about his work with, and about, Humberto Solás, one of the great filmmakers of revolutionary Cuba. Barba Salva was on campus March 1-4 to screen his film, Humberto, as part of the Council on Latin American & Iberian Studies Spring Film Series. The following is an edited excerpt of their talk.

Carlos Barba Salva: Thank you for organizing this film series within the year that culminates with the Latino and Iberian Film Festival at Yale (LIFFY) next November. I have fond memories of New Haven, because your festival screened the USA preview of Humberto in 2014 and it received the prize of Best Documentary in another festival that you help organize, LANAFF. I am always pleased to return here because I really enjoy the special mix of university students, professors and New Haven area community members that come to the screenings. My experience here has always been very positive.  The Q&As (after screenings) are very interesting and at times make me discover aspects of Cuban cinema as seen through the lens of an outsider, that perhaps had not been the intention of the filmmaker. It’s wonderful when a detail in the film resonates with the audience resulting in new ideas or emotions. That is the magic of cinema that at times is inexplicable.

MT:  What do you think is the best contribution that Humberto Solás made to your filmmaking?

CBS: I think that his contributions were many, and at times they cannot be measured. As they say, “It’s not the quantity, but the quality that matters most.” That phrase accurately describes my attachment to that iconic master of Latin American films.

I was able to participate in the making of his final two films Barrio Cuba and Adela and that really was a SCHOOL in capital letters without Humberto even realizing that he was indeed teaching me. His vocation was to make films, not to teach (even though his filmmaking workshops around the world were very popular), but if you paid attention, you could catch a glimpse of how he directed the actors or how he would arrange the composition of a scene perhaps with the same intensity that he showed when he composed the scene of the Geneva clock in Cecilia (1981) or in his more recent Barrio Cuba (2005) the death of the character named María. And, well, all this was a hands-on educational experience, because I came to Humberto because of a thesis that I was writing for my university studies about how Humberto had adapted and interpreted Alejo Carpentier’s novel El Siglo de las Luces (Explosion in the Cathedral). It was very good to meet him first in that way, and then to work with him at a later time. I first approached him about the  theory behind his filmmaking, and then, I was actually able to make films with him, proving that at times one’s dreams are possible to achieve.  I always say that my film school’s name is Humberto Solás. As a man of letters, too, there is no doubt that his figure and his films are my life’s research, almost a doctoral dissertation. It has equal footing with my other scholastic research projects.

MT: Your documentary, Humberto, has enjoyed much success. It has been featured in many universities, in academic forums, it was selected to celebrate the 55th anniversary of the Cuban Film Institute (ICAIC), it was a finalist for the prestigious Fénix Film Award for best Ibero-American film, and, of course, it was selected to be screened at many festivals around the world where it has won a number of awards, and it was even shown on Cuban TV. This is a quite admirable record for a film.  What other paths still remain to be crossed?

CBS:  It is truly a blessing that we are in 2017 and Humberto continues its journey at festivals, and is now being requested even more frequently. The important thing I hope it does is to reach more and more people. I hope that it can be distributed, which is an Achilles heel of our cinematography. It is difficult path to find the proper venue for distribution. There is a great deal of interest and I think that in a short time we will be able to achieve such an expansion. Without a doubt, I am very grateful for film festivals because they are some of the few spaces available to showcase Latin American films, and a good bridge towards the understanding of the region. I am very grateful, as is also all of Humberto’s wonderful crew that accompanied me for five years in the making of this documentary.

MT:  What new projects are you planning?

CBS:  I am in the final postproduction stage of a short fiction film called 25 horas (25 Hours), a production of Mareafilmes with the collaboration of Xperima Productions in Los Angeles.  It was completely filmed in Cuba and stars Isabel Santos, Alicia Bustamante, and Enrique Pineda Barnet – both icons of Cuban cinema. I am also writing a new script, I don’t like to say that I was commissioned to write it because it is really a pleasure to do so.  I am working on it with great liberty starting with an initial idea that was given to me.  Its name is Muraille (The Wall).  I also have another two projects at hand that will come to fruition if proper conditions develop.  Cinema is a mystery.