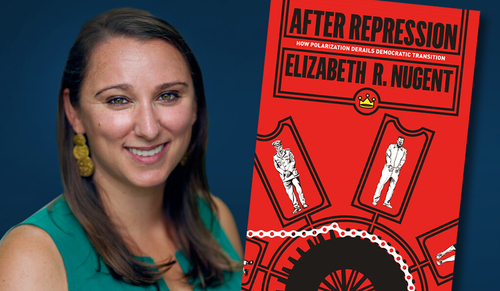 The 2011 Arab Spring set both Tunisia and Egypt on a course toward democratization, but their trajectories soon diverged.

Tunisian political elites have since cooperated in passing a constitution, holding elections, and executing a successful transfer of power. Egypt’s democratic transition crumbled after its political elites failed to compromise.

Nugent found that widespread repression in Tunisia fostered a shared identity among dissidents from various groups, while, in Egypt, the Muslim Brotherhood endured the worst of the Mubarak regime’s wrath.

Nugent, an assistant professor of political science in the Faculty of Arts and Sciences, recently spoke with YaleNews about her book. The interview has been edited and condensed.

How did the experience of repression among Tunisian dissidents contribute to the country’s transition to democracy?

I argue that Tunisia’s success has been less about the direct personal bonds formed between the elites in the various opposition groups, although obviously those matter, and more about how the opposition leaders were able to view each other as fellow victims of the regime. Their shared experiences created a shared identity. The similar experiences of repression shaped the way in which people think of themselves with implications for which other groups they were willing to cooperate with and with whom they would compromise. This situation didn’t exist in Egypt, where the Muslim Brotherhood bore the brunt of repression and had no shared identity with other opposition groups.

What did you observe that led you to this conclusion?

When I started my fieldwork in Tunisia, I was struck by the way secular and Islamist opposition groups spoke much more cordially about each other than they did in Egypt. It’s not that the Tunisian opposition didn’t have disagreements, but those disagreements were less intense. As I started probing these relationships, it became clear that these men — and they were for the most part men — knew each other from before the revolution. They’d say things like, “When I was in exile in London with this fellow,” or, ‘When I was in prison with that fellow…” and I realized that these pivotal experiences, whether they had been abroad or in prison, were really important to what happened afterwards.

In Egypt, the same kinds of questions prompted very vitriolic rhetoric from people about their political competition. And within the Muslim Brotherhood, there was really this feeling that the group was uniquely victimized and that, by doing very well in post-revolutionary elections, they believed they deserved to execute their vision of Egyptian society and politics.

How did you approach your fieldwork?

I started in Tunisia by having conversations with politicians in their homes or in their offices and trying to build trust with them by demonstrating that I’d done my homework and had a genuine interest in their experiences. Things sort of snowballed. Once I built trust with one person, they were willing to introduce me to other folks. Everybody has each other’s phone numbers.

Egypt was more challenging. I made several research trips there, but by mid-2018 it became increasingly dangerous to do research in the country. I conducted a lot of interviews with Muslim Brotherhood members who were in exile. There are little pockets of exiles around the world concentrated in cities like New York, London, and Istanbul.

How did the post-revolution process play out in each country?

In Egypt, the Muslim Brotherhood dominated the initial constitutional drafting process to disastrous effect. Its competitors essentially walked out due to the Brotherhood’s uncompromising approach. That constitution was overturned by a 2013 military coup, which initiated authoritarian retrenchment. In recent years, constitutional reforms have strengthened the executive branch, giving President Abdel Fattah al-Sisi more power while decreasing oversight of his decisions.

Tunisia’s transition process was much more successful than Egypt’s from the beginning. To draft the constitution, the National Constituent Assembly was divided into smaller groups that were representative of the entire political spectrum. The constitution took three years to complete, but in the end produced a document that enshrines a balance of religion and politics and also weakened the executive significantly.

My Tunisian friends and interview subjects always urge me to be careful to not oversell Tunisia’s success. The country continues to face a number of very daunting political, economic, and security challenges, but when you have a shared identity and a shared sense of purpose, it’s a little bit easier to keep coming back to the negotiating table to work through issues.

You interviewed more than 100 former members of the opposition from both countries. What had these people endured?

In Tunisia, particularly among the Islamist group, there were a lot of arrests in the 1990s and many people were jailed until 2005. A number of the really high-ranking folks were in solitary confinement for most of that period. We’re talking 12 to 15 years of really terrible mental and physical strain.

Torture tended to be concentrated at the beginning of the experience, during the arresting process. Many folks were imprisoned for lengthy periods. They missed seeing their children grow up. After being released, they confronted a number of issues, such as struggling to obtain identity papers or hold down good jobs. Without identity papers, it’s hard to get the mental and physical health care.

Did any specific individuals you spoke with stand out?

I interviewed a man named Ali Laarayedh, who was a very high-ranking member of Ennahda — Tunisia’s main Islamist party — and served as prime minister after the revolution in 2013. He’s one of the Tunisian opposition members who spent 15 years in prison, most of them in solitary confinement. He’s been a prominent figure in the democratic transition and was very eloquent in discussing his experiences of repression and how they informed his opinions about democratization, civilian oversight of the military and the police force, and a range of other issues.

It’s frankly remarkable the way in which some of these men were able to make sense of terrible things that happened to them and put those experiences in perspective in a very positive way that has made them more committed to democracy and human rights.

I hope this book demonstrates through these individual stories what repression feels like. I hope readers see that repression is a major psychological and physical trauma, and at the same time it can have a personal effect that actually facilitates mobilization, cooperation, and an embrace of democratic principles.

Do you see any hope for democracy in Egypt?

I will never count Egypt out. The Trump administration has been very supportive of the highly repressive current regime and essentially given it free rein with human rights violations, but there are expectations on both sides of the foreign policy relationship that this will change with the Biden administration. In fact, the regime has become so repressive that my book’s argument might come into play at some point. The widespread repression may create a shared experience among the Muslim Brotherhood and other dissident groups that fosters cooperation and compromise.