Two People, One Career: Researching Husband-Wife Collaborations in the History of Anthropology at the Sterling Memorial Library 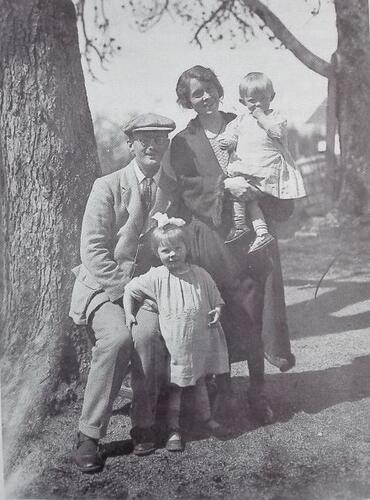 Council on Latin American and Iberian Studies (CLAIS) recently sat down for an interview with Daniela Salvucci (biography below), who is currently conducting research at the Sterling Memorial Library (Manuscripts & Archives) on husband-wife collaborations in the history of anthropology.

Who was Bronislaw Malinowski and who was Elsie Masson?

Bronislaw Malinowski (1884-1942) is considered one of the founding-fathers of modern sociocultural anthropology and the pioneer of the ethnographic method, based on intensive fieldwork and participant observation. In the 1910s, he left Poland to study anthropology at the London School of Economy (LSE) and did fieldwork in the Trobriand Islands, writing several fundamental monographies. After teaching for years at LSE, he moved to the US and was appointed as professor at Yale, where he died in 1942.

Elsie Masson (1890-1935) was an Australian journalist and writer. In the 1910s, she travelled throughout the Northern Territories of Australia together with anthropologists and explorers, writing a book on this experience. As a nurse trainee, she struggled to improve nurses’ working conditions in her country and was involved in other political activities. From 1917 onwards, after meeting Bronislaw Malinowski in Melbourne, she started assisting him in his work, as both his collaborator and his wife.

What is meant by the “two-person, single career” model of anthropology?

The concept “two person, single career” was elaborated by sociologist Hanna Papanek in the 1970s and used to refer to the social praxis and expectation that, within a couple, particularly in a middle-class intellectual milieu, the wife would deflect her interests and own career to support the career of her husband. Not only does she assume family duties, but also contributes practically and intellectually to the professional activities of her husband, although remaining in the shadow. Within anthropology, this model applies to the several cases, hopefully more usual in the past than nowadays, in which an anthropologist’s wife helps her husband in doing ethnographic fieldwork or writing anthropological texts, without being recognized as a co-worker.

According to biographical sources, Malinowski and Masson worked together in Melbourne on the ethnographic material he produced during his first fieldwork in the Trobriand Islands (1915-1916). They subsequently corresponded during Malinowski’s second fieldwork (1917-1918), also discussing novels and narrative strategies in their letters. In the following years that they mostly spent in Europe, Masson supported her husband as a discussant and a copy editor of his monographs, particularly in the case of “Argonauts of the Western Pacific” (published in 1922). Masson’s writing abilities and the couple’ shared interest in literature could have influenced Malinowski toward adopting a more appealing writing style, which was one of the keys of his successful career.

As a researcher, what kinds of materials help you to understand the influence of Masson on Malinowski?

The letters that Malinowski and Masson exchanged since 1917, and during the 1920s, when he was teaching at LSE and she was living with their three daughters in the house they had bought in the South Tyrolean Alps, present several examples of their collaboration. These letters have been edited by their youngest daughter, Helena Malinowska Wayne (1925-2018) in a two-volume book titled “The Story of a Marriage” (1995), which has been the starting point of my current research, together with the biography of Malinowski written by Michael Young for the Yale University press (2004). Both these authors underlined the role that Elsie Masson played in Bronislaw Malinowski’s career.

What kinds of materials are you researching at the Sterling Memorial Library archive?

At the Sterling Memorial Library archive, I am searching for unpublished correspondence as well as for drafts of manuscripts that could shed light on the different forms of contribution of Elsie Masson to the work and career of his husband.

Are your findings at the Sterling Memorial leading to new conclusions or ideas about the extent of Masson’s impact?

My research has just begun, but I hope to find some clues and useful material!

Daniela Salvucci is a PhD sociocultural anthropologist, researcher at Free University of Bozen-Bolzano (unibz) in Italy and Fulbright visiting scholar at Yale. She has done research on family memories of migration and on kinship, gender, and ecology in Andean Argentina. Her current projects deal with cultures of mountain areas’ people and with the story of the Malinowski family in South Tyrol, in collaboration with MFEA-The Malinowski Forum for Ethnography and Anthropology at unibz (https://mfea.projects.unibz.it/). Her archival research at Yale, entitled “Intimacy at work: Elsie Masson’s hidden contribution to Bronislaw Malinowski’s work”, looks at this case of husband-wife collaboration within the history of anthropology.