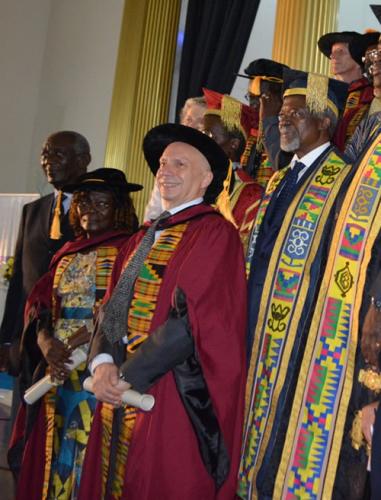 University of Ghana conferred honorary degrees upon Yale Professors Ian Shapiro and Christopher Udry at a special congregation led by Kofi Annan, former Secretary-General of the United Nations, on March 23, 2016.

Ian Shapiro, Sterling Professor of Political Science, Adjunct Professor of Law, and Henry R. Luce Director of the Whitney and Betty MacMillan Center for International and Area Studies at Yale, was presented with his honorary degree after giving the 2016 Aggrey-Fraser-Guggisberg Memorial Lectures at the University of Ghana on “Fighting Political Domination.” Professor Shapiro’s lectures focused on three themes over the course of three days: The Responsibility to Protect: From Rwanda to Libya and Beyond; Lessons from South Africa’s Transition I: The Role of Leadership; Lessons from South Africa’s Transition II: The Role of Business.

Professor Shapiro is considered to be a leading political scientist in the world and renowned for outstanding research methodology. He has written widely and influentially on democracy, justice, and the methods of social inquiry. He is a fellow of the American Academy of Arts and Sciences, the American Philosophical Society, and a member of the Council on Foreign Relations. His most recent books are The Real World of Democratic Theory; Containment: Rebuilding a Strategy against Global Terror; The Flight From Reality in the Human Sciences; Death by a Thousand Cuts: The Fight Over Taxing Inherited Wealth (with Michael Graetz); and Politics against Domination.

Christopher Udry, the Henry J. Heinz II Professor of Economics, was awarded with an honorary degree for his “distinguished scholarship.” Professor Udry is  “internationally recognized for outstanding research and publications in the area of Development Microeconomics. He has supported research at University of Ghana and enhanced capacity building for several Ghanaian and African development economists for many years.”

Professor Udry is a development economist whose research focuses on rural economic activity in Sub-Saharan Africa. He has conducted extensive field research in West Africa on technological change in agriculture, the use of financial markets, asset accumulation and gift exchange to cope with risk, gender relations and the structure of household economies, property rights and a variety of other aspects of rural economic organization. Professor Udry has directed the Economic Growth Center, served as the Chair of the Department of Economics, and as Chair of the African Studies Council at the MacMillan Center.