‘Ecology of the mind’: The environmental insights of nonwestern societies 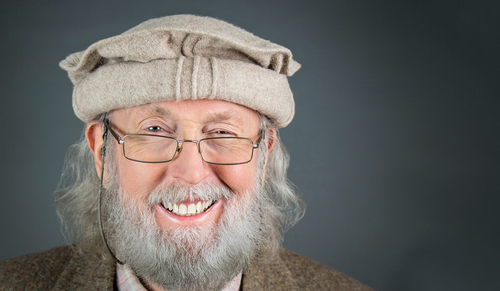 Consciousness, the distinctive quality that allows humans to perceive the world, sometimes gets in the way of people trying to comprehend the ecosystems in which they live — a paradox that hinders our ability to live sustainably, argues Michael Dove, the Margaret K. Musser Professor of Social Ecology in the Yale School of the Environment (YSE).

Overcoming the “curse of consciousness” requires escaping conscious self-awareness and distancing ourselves from the narrow, goal-oriented thinking that drives many western approaches to the environment, Dove asserts in his most recent book, “Bitter Shade: The Ecological Challenge of Human Consciousness” (Yale University Press). In the book, which has been cited as a best-selling title in environmental science by Library Journal, Dove explores traditional societies in South and Southeast Asia for insights into how to develop sustainable environmental relations.

Dove, who is also a professor in the Department of Anthropology in the Faculty of Arts and Sciences, a curator at the Peabody Museum, and a member of the Southeast Asian Studies Council at the Yale MacMillan Center, recently spoke to Yale News about what industrialized countries can learn from the environmental relations in the societies he has studied. The interview has been edited and condensed.

Where did the idea for the book originate?

Michael Dove: I spent the first half of my career, a couple of decades, working in conservation and development initiatives in South and Southeast Asia, with a

variety of nongovernmental organizations, foundations, and government agencies. I came to see a pattern that we might call “serial brilliance,” in which scientists and planners — often foreign “experts” — would devise a “definitive” solution to a conservation and development challenge, which would fail, and then they would come up with another, and then another. The Green Revolution in agriculture is a classic example of this. A “miracle” variety of rice would be developed and released, then a devastating pest would emerge, then they’d release another variety, and another pest would come along, and so on. Notwithstanding this obvious pattern of recurrent failure, systemic insights, or wisdom seemed elusive.

The work of the anthropologist Gregory Bateson sheds some light on this phenomenon. He argued that humans tend to think in a linear purposive way that is often at odds with natural processes, which he calls the “curse of human consciousness.” He believed that this lay at the root of the ecological crisis, which is thus, in his words, a crisis of “the ecology of the mind.” What we need, he suggested, was a capacity to conceptually distance ourselves from our own everyday lives.

How might that perspective lead to better environmental outcomes?

Dove: The book is an effort to ask what non-western human-ecological systems might have to tell us about sustainable environmental relations. How might their study help us to imagine alternative environmental relations, which aren’t dependent on fossil fuels or industrial farming, to give two obvious examples. How can the study of such societies help us to rethink our place on the Earth?

What did your research involve?

Dove: I looked at traditional societies in South and Southeast Asia for examples of ways to achieve the perspective that Bateson described. I employed ethnographic and participant observation methods, analysis of royal chronicles, scrutiny of ancient religious texts, and study of tribal myth and ritual, as well as contemporary media, over the course of several decades.

The book’s title comes from a discussion with a farmer in Pakistan, regarding shade, in this case the shade of the Persian lilac tree. As he described it, tree shade is an emission that possesses density, temperature, taste, and size. In the case of the Persian lilac, it is “bitter shade.” This characterization of tree shade, which was so unlike my own worldview, became my unifying metaphor for this project to denaturalize everyday western views and scientific views of the natural world.

What’s an example of a perspective in the societies you studied that could be useful in rethinking human-ecological systems in the industrialized world?

Dove: One example comes from Dayak tribespeople in Indonesian Borneo, who in their rituals use archaic cultigens — root crops and non-rice grains — that have been completely supplanted in their diet by rice. Although rice is dominant today, not only economically but also culturally, it was not always so. The “paradox of rice” in much of Asia is that it is not that well suited agronomically to much of the region, but it spread historically because it suited centralized states that wanted to control agrarian peoples and extract surplus product from them. The preservation of non-rice cultigens in ritual serves as a reminder that other agricultural regimes, and other relationships to the state, once were possible and may be so again. 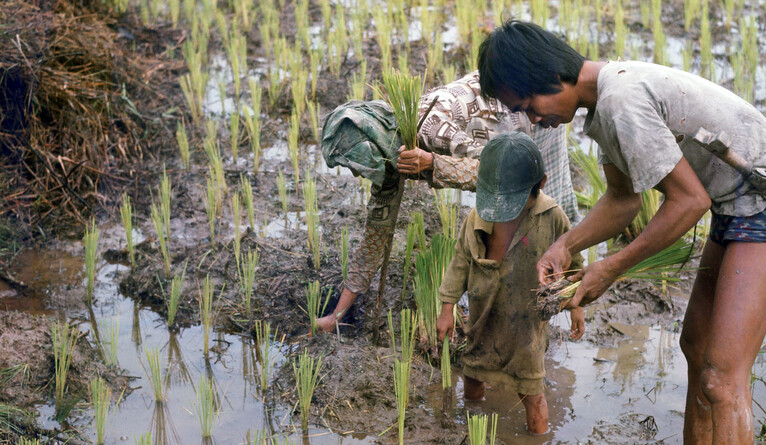 A Kantu’ family in Kalimantan — the Indonesian portion of Borneo — transplanting rice seedlings into a swamp swidden, an area of land slashed and burned for cultivation.

The book examines multiple principles common to the local resource management practices you studied that help them sidestep human consciousness, one being “metamorphosis.” Can you talk about that?

Dove: A recurring image from South and Southeast Asia, as elsewhere around the world, is the idea of viewing humanity through the eyes of nonhumans, animals. From the writings of Homer and Ovid, through the stories of King Arthur, up to Kafka’s “Metamorphosis,” and today’s efforts by scholars to “inhabit” the bodies of various animals, we have imagined the possibility of human-nonhuman transformation and the insights that it might offer into the human condition and, indeed, human identity. It’s a view of ourselves from beyond ourselves. Interest in this subject is also driven today by the animal rights movement and by new scientific interest in the possibilities of sentience in animals and perhaps even plants. More generally, there is an interest in trying to “de-center” the human perspective, and give greater weight to the place and priorities of the nonhuman, in order to better confront contemporary environmental crises.

You mentioned that the ideas behind “Bitter Shade” were inspired by the work of anthropologist Gregory Bateson. What do you suppose he would make of the modern relationship with nature?

Dove: Bateson would be dismayed to see that, in the 50 years since he presciently wrote about the ecological crisis, it has only gotten worse. I think he would still attribute the crisis at least in part to our continued inability to see the wider implications of our view of the world, of our science. The need to better see science’s place in society is well illustrated by the recent critiques of the science of evolution, then climate change, and now pandemics — all of which represent one of the greatest attacks on, and retreats from, reason in the last half millennium. These critiques caught modern science by surprise, and they have had an enormous and deleterious impact on policy, to which we are still trying to find an answer.

The critique of evolution was annoying but didn’t seem to threaten our everyday reality. But that’s not true of the critique of climate change, which has had a deleterious impact on policy. And the critique of science in response to the pandemic has unfortunately contributed to its death toll.

What kind of support did you receive from the YSE community while researching and writing the book?

Dove: My work on this volume benefitted greatly from the fact that I am based in the School of the Environment. We are not immune to the challenges to interdisciplinary research and education in academia today, but we constantly strive against them. I have amazing students — including in the combined YSE-Anthropology doctoral program — who read “Bitter Shade” in manuscript form, and at Yale University Press I work with a legendary editor, Jean Thompson Black. Also, I hold a contest among my students to design the jackets for my books, with the winner receiving a jacket credit and a monetary award — and a copy of the book! The jacket for “Bitter Shade” was designed by Javier Román-Nieves ’19 M.E.M.

What are you currently working on?

My thesis is that the historical discipline of natural history offered a holistic view of the world that has greatly diminished. It began to wane in the late-19th and early-20th centuries as individual scientific disciplines proliferated and as disciplinary boundaries were erected. I believe that this has not been entirely beneficial. It has promoted a compartmentalized view of human society and the natural world, which has made it more challenging to address environmental crises like climate change, which cross not merely geographic but also disciplinary boundaries.