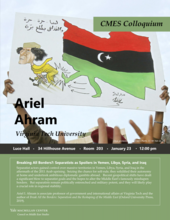 Separatist actors gained control over massive territories in Yemen, Libya, Syria, and Iraq in the aftermath of the 2011 Arab uprising. Seizing the chance for self-rule, they solidified their autonomy at home and undertook ambitious diplomatic gambits abroad. Recent geopolitical shifts have dealt a significant blow to separatist goals and the hopes to alter the Middle East’s famously misshapen borders. But separatists remain politically entrenched and military potent, and they will likely play a crucial role in regional stability.
Ariel I. Ahram is associate professor of government and international affairs at Virginia Tech and the author of Break All the Borders: Separatism and the Reshaping of the Middle East (Oxford University Press, 2019).