Visual Acts of Radical Care: An Exhibition of Feminist Artists-Activists from Central and Eastern Europe 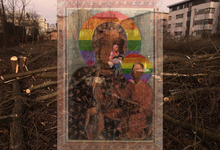 “In a political situation in which care is both exceptionally necessary and exceptionally underprovided,” writes artivist Harry Josephine Giles, “acts of care begin to look politically radical. To care is to act against the grain of the social and economic orthodoxy: to advocate care is… to advocate a kind of political rupture.” In Central and Eastern Europe, authoritarian regimes and illiberal democracies have been aggressively suppressing solidarity, curiosity, and tolerance by silencing and disenfranchising artists, expelling NGO organizations, and debilitating social movements. Taking a stand against such oppressive trends by building allyship amongst ethnically, racially, religiously varied communities has indeed become an act of “radical care.”

With the global state of populist and nationalist governments taking control, advocacy work and practicing care has become an ethical commitment. Radical care demands that activists, artists, and scholars rethink the conditions of equality, togetherness, and diversity. Radical care proposes mutual recognition and mutual aid; it envisions alternative forms of solidarity and acts of sharing.

The artists presented in this exhibition perform acts of radical care in at least three different ways: by bringing to fore invisible experiences and existences, by becoming protectors instead of protestors, and by daring to expose the radical ruptures in society. Hungarian photographer, Andi GV and Ukrainian visual artist Alevtina Kakhidze both redraw—Andi GV through photography and Kakhidze with pencil and ink—the contours and shades of those who live in liminal geopolitical spaces, dehumanized and unrecognized by the nation states and international organizations. The artworks of Polish artist and artivist Cecylia Malik and the Belarusian artist Masha Svyatogor demonstrate how performances of radical care may transform the position of the activist: protestors, through their affective advocacy work, become protectors of ecological, racial ethnic, labor, and human rights causes. Lastly, this exhibition also proposes that certain protest actions may constitute acts of radical care. By subverting the Belarusian folk embroidery tradition and Poland’s most sacred religious icon in their artivist works, Rufina Bazlova and Polish LGBTQ activists, respectively, turn well-known nationalistic and religious tropes into sites of rupture. In these images the conflicting ideologies are visualized, and—within the utopia of the artworks—perhaps are also reconciled.

Each of these artists succeed in accomplishing the ultimate goal of radical care: they build communities and inspire them to envision new social realities. Through their works, the organizers of this conference and the curators of this exhibition invite you to do the same.