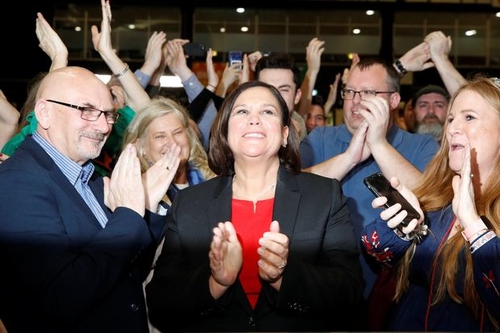 In contrast, the two parties that had dominated Irish politics and alternated in a de facto duopoly for decades—the centrist Fianna Fáil headed by Micheál Martin and the center-right Fine Gael headed by Taoiseach Leo Varadkar—suffered reductions in their shares of the First Preference Votes; Fianna Fáil won 22.2 percent, compared with 24.3 percent in the 2016 election, and Fine Gael won only 20.9 percent, compared with 25.5 percent in 2016.

The election was originally scheduled for early next year but it became clear late last year that Varadkar’s minority government was on very thin ice and might well be defeated in the Dáil. In December, reflecting widespread public discontent with shortages of available housing, rising rents, and increasing homelessness, a motion of no confidence in the minister for housing was narrowly defeated by only three votes. And in early January, widespread complaints about overcrowded hospitals and delays in getting access to health care prompted the tabling of another motion of no confidence, this one in the minister for health. Several days later, Varadkar, who has been Taoiseach since replacing Enda Kenny as the leader of Fine Gael in June 2017, requested President Michael D. Higgins to dissolve the Dáil and call a new election.

Given the widespread concerns about housing and public health and the fact that it had been in power since 2011, there was good reason to think that Fine Gael would lose some support in Saturday’s election and that at least some of that loss would accrue to the benefit of Sinn Féin. Indeed, whereas polls last autumn, when Varadkar played a decisive role in persuading British Prime Minister Boris Johnson of the necessity that the border between Northern Ireland and the Republic remain open in all future circumstances, whatever the post-Brexit relationship between the UK and EU, suggested that roughly 30 percent of the voters supported Fine Gael, by the time the election was called that figure had dropped to roughly 20 percent. And conversely, whereas polls throughout much of last year indicated that less than 15 percent of Irish voters supported Sinn Féin, that figure rose dramatically in late December and January, and by February roughly 25 percent of those polled said they intended to vote for Sinn Féin. Especially notable was the fact that more than 30 percent of those aged 18 to 34—the cohort most adversely affected by the housing shortage and high rents—supported Sinn Féin while less than 30 percent of that cohort supported Fine Gael or Fianna Fáil. The younger voters were no doubt attracted by Sinn Féin’s advocacy of a progressive left-of-center economic program that featured a robust increase in spending, including spending for the construction of more housing, and increased taxes on business. And they were probably attracted to Sinn Féin as well by all the Brexit-related discussion last fall about the border with Northern Ireland and the “backstop”—and the possibility of unification at some point in the future. The 1998 Belfast Agreement, also known as the Good Friday Agreement, provides for unification in the event majorities in both Northern Ireland and the Republic approve and Sinn Féin has called for a referendum on unification within five years.

On the other hand, notwithstanding the housing and health crises, the fact that Fine Gael had been in government since 2011, and the generational disaffection with the two big parties that have alternated in power for so many years, no one could deny that the Fine Gael governments had presided over a dramatic recovery from the severe contraction of the economy that occurred in 2008-09 and the collapse of the banking system and financial crisis that followed and led to the €85 billion bailout by the EU and the IMF in November 2010, all of which occurred while Fianna Fáil was in government. Coming to power in February 2011, only a few months after the bailout, the Fine Gael government was of course forced to administer the intensive and prolonged dose of fiscal and monetary austerity agreed by its predecessor. But after three years of negligible growth, the economy did return to the sustained high growth of the late 1990s and early 2000s – the years of the “Celtic Tiger”; thus, Gross Domestic Product increased by 8.6 percent in 2014, 25.2 percent—yes, 25.2 percent—in 2015, 3.7 percent in 2016, 8.1 percent in 2017, 8.2 percent in 2018, and 5.6 percent last year. And as the economy resumed its pattern of sustained growth, the rate of unemployment, which had reached 15 percent in 2010-12, dropped every year thereafter and is now in the vicinity of 5 percent.

Nevertheless, on Saturday the voters turned their back on Varadkar and Fine Gael and opted for a new government. But precisely which parties will form the new government is not yet clear – in part because of the complexity of Ireland’s Single Transferable Vote form of proportional representation by which the 160 seats in the Dáil are allocated among the parties. Ireland has 39 constituencies, in each of which voters elect three, four, or five TDs, members of the Dáil. Voters in each constituency indicate their preferences for the candidates on a ballot, a quota is calculated, the candidate or candidates exceeding the quota are elected, the second preferences of the surplus of votes for the successful candidates are distributed to the other candidates and the counting and transferring process is repeated while the lowest-placed candidates are eliminated until eventually—sometimes after a half-dozen or more iterations of the process over two or three days—all of the seats are allocated.

It took two full days to complete the process of counting and transferring the votes and repeating the process until all of the seats in the 39 constituencies were allocated to the various parties. When all 160 seats had been allocated, Sinn Féin, which, underestimating its support, ran only 42 candidates in the 39 constituencies, had won 37 seats; Fianna Fáil, which ran 84 candidates, had won 38 seats; and Fine Gael, which ran 82 candidates, had won 35 seats. Several smaller parties also won seats—the Greens, with 7.1 percent of the FPVs, won 12 seats; the Labour Party, with 4.4 percent of the FPVs, won six seats; the Social Democrats, with 2.9 percent of the FPVs, also won six seats; and the Solidarity-People Before Profits Party, a product of the austerity experience, with 2.6 percent of the FPVs, won five seats. Independents and others, with 15.4 percent of the FPVs, won 21 seats. Obviously, no party will have a majority or even be close to a majority in the new Dáil. Nor will any combination of two of the three largest parties have a majority, although with the support of some independent TDs and/or TDs representing one or more of the smaller parties, any two of the three largest parties may be able to construct a majority. And it would, of course, also be possible for any one, or any pair, of the three largest parties to form a minority government with a “confidence and supply” arrangement similar to the one the outgoing Fine Gail government had with Fianna Fáil.

The negotiations among the parties have just begun and will no doubt take some time—more likely, weeks rather than days. But in the meantime, one thing is certain; Regardless of whether it becomes part of the new government or part of the opposition, Sinn Féin has achieved a remarkable victory and the Irish party system has been transformed.