After third round of negotiating future relationship, the EU and UK agree: No progress 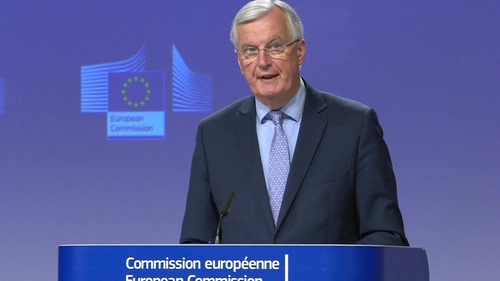 The EU and UK negotiators met again last week, via video conference, in the third week-long round in the negotiation of their future relationship. After the round concluded Friday, both sides said they had made little progress and were still far apart on all the major issues about which they have disagreed since the negotiation began in March.

As he had after the earlier rounds, Michel Barnier, the EU’s chief negotiator, summarized what had—and had not—been accomplished in last week’s round. He noted the UK had put forward new text proposals that covered nearly all of the topics under consideration—although it had not made them public, so they couldn’t be shared with the member states and the European Parliament. He noted the discussions clarified some issues involving trade in goods, transport, and UK participation in future EU programs. And he said they were at last able to begin a dialogue on the fisheries issue.

But, he said, “with the exception of some modest overtures, we failed to make any progress on any of the other more difficult issues.” Specifically, he said the UK “did not engage in a real discussion on the question of the level playing field—those economic and commercial ‘fair play’ rules that we agreed to, with Boris Johnson, in the Political Declaration. On this topic, this was a round of divergence, with no progress.” Regarding the governance of the future relationship, “the few useful discussions we had were limited to sectoral questions. We were unable to make progress on the issue of the single governance framework that we believe is necessary to build a close and comprehensive partnership.” And, he said, the UK “refuses to commit, in an agreement with us, to guarantees protecting fundamental rights and individual freedoms resulting from the European Convention on Human Rights, as agreed in the Political Declaration.”

Barnier underscored the EU’s ambition to negotiate a free trade agreement with no tariffs or quotas on any goods—something that would be a first in the history of EU FTAs. But he made it clear the EU’s trade policy “must protect social and environmental standards, and even help raise them, in the general interest of citizens and consumers.” And “it must be underpinned by fair competition conditions, namely when it comes to state aid, social standards, or taxation.” The UK, he said, “tells us it wants to maintain high social and environmental standards—even higher than ours. That should make it possible to engage in detailed discussions on these points…Yet, the UK refuses this discussion.” He made it clear the EU’s demand for strong level playing field guarantees is not negotiable: “We refuse to compromise on our European values to benefit the British economy. Economic and commercial fair play is not for sale! Open and fair competition is not a ‘nice-to-have’. It is a ‘must-have’. Our Member States have been very clear that, without a level playing field, and without an agreement on fisheries, there will be no economic and trade partnership agreement.”

He continued: “We are negotiating a trade agreement with a third country here—one that chose to become a third country. This is not an opportunity for the UK to ‘pick and choose’ the most attractive elements of the Single Market. This makes me believe that there is still a real lack of understanding in the UK about the objective, and sometimes mechanical, consequences of the British choice to leave the Single Market and the Customs Union. To make progress in this negotiation—if it is still the UK’s intention to strike a deal with the EU—the UK will have to be more realistic; it will have to overcome this incomprehension and, no doubt, it will have to change strategy.”

He also reminded the UK, as he had after the previous round, of its legal obligation to implement the Withdrawal Agreement, not only in terms of citizens’ rights but also in regard to the Protocol on Ireland and Northern Ireland contained in the Agreement. And he noted again that the UK has not yet laid out its approach for fulfilling its obligations under the Protocol, which must be fully operational by January 1, 2021.

David Frost, the UK’s chief negotiator, echoed Barnier’s views about the lack of progress in last-week’s negotiation—although he of course disagreed about the reasons for the lack of progress. Acknowledging that “we made very little progress towards agreement on the most significant outstanding issues between us,” he said it was “hard to understand why the EU insists on an ideological approach which makes it more difficult to reach a mutually beneficial agreement….We very much need a change in EU approach for the next round.” Hoping to move the negotiation forward, he said the UK would make all of its draft legal texts public this week. And, he said, “The UK will continue to work hard to find an agreement, for as long as there is a constructive process…and continues to believe that this is possible.” He said he continues to believe that, notwithstanding the lack of progress thus far, the UK and EU will be able to agree on a full Free Trade Agreement by the end of the year “without major difficulties.”

There will be at least one more week-long round of negotiation, beginning on June 1, before the High Level Conference later in June at which the EU and UK leaders will take stock of the negotiation. Article 132 of the Withdrawal Agreement allows the Joint Committee, which oversees the implementation of the Agreement, to adopt, prior to July 1, a decision to extend the current transition period, during which the UK remains in the EU’s Single Market and Customs Union, from December 31 to December 31, 2021 or 2022. Given the lack of progress thus far, the mutual warnings of imminent stalemate, and the EU’s view that, in order to give sufficient time for ratification so it could take effect on January 1, 2021, the agreement would have to be completed by the end of October, there will no doubt be discussion, both at the High Level Conference and the June 18-19 meeting of the European Council, of an extension. But the UK has made it clear on numerous occasions that it won’t ask for an extension, and to underscore that position it added a clause to the European Union (Withdrawal Agreement) Act 2020 that prohibits a minister from agreeing in the Joint Committee to an extension.

The government could, of course, introduce new legislation that would allow it to extend the transition period despite that prohibition and Boris Johnson could decide at the eleventh hour to opt for an extension, citing the profound effects of the COVID-19 pandemic on the British economy and the negotiation itself. But Michael Gove, the British Chancellor of the Duchy of Lancaster and, in that capacity, co-chair of the Joint Committee, has said, on many occasions—most recently, two weeks ago in the House of Commons—there will be no extension and that remains the government’s position today. And in the meantime, the clock keeps ticking steadily toward midnight on December 31, when the current transition period will end and the British economy—which the Bank of England predicts will contract by 14 percent this year, the largest contraction in more than 300 years—will leave the safe harbor of the EU’s Single Market and Customs Union for uncharted waters.