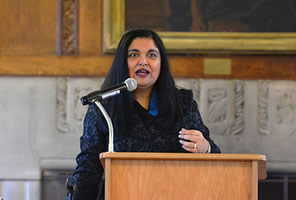 The story of American abolitionism is often told in a way that discounts the significance of slave resistance in the antislavery movement and is unnecessarily divided along racial lines, historian Manisha Sinha said in a Feb. 18 panel discussion on campus.

The result is a “whitewashed understanding of abolition that weeds out the black presence,” she argued.

Sinha, professor of Afro-American studies and history at the University of Massachusetts, Amherst, visited Yale in celebration of the publication of her new book, “The Slave’s Cause: A History of Abolition,” published by Yale University Press. She outlined the main arguments of her book in her presentation at the event, which was sponsored by the Yale Center for the Study of Representative Institutions.

“The history of abolition is an integrated story even though it is not usually told in that manner,” Sinha told her audience in the Hall of Graduate Studies. She characterized “The Slave’s Cause” as a comprehensive history of the abolition movement that “re-evaluates it as a radical, interracial, social, and political movement” that “broadened the horizons of democracy” and “unfolded in a 100-year drama in law, politics, literature, and on-the-ground activism.”

“For too long, historians of abolition have told the story in a fragmented way, and continue to do so, along the lines of race and gender,” Sinha said. She argued that both free and enslaved Africans and African Americans were central to the abolitionist movement, which she said, can be traced back to the revolutionary era, when both black activists and Quaker abolition societies took on the antislavery cause.

Too often, abolitionism is seen as a white, middle-class movement, she argued, adding that “slave resistance, rather than bourgeois liberalism, lay at the heart of abolitionism.”

“Slave rebellion paralleled isolated criticisms of slavery in colonial America. The enslaved inspired the formation of the first Quaker-dominated abolition societies, as well as the first landmark cases that inaugurated emancipation in the Western world,” she commented, citing, among others, the Amistad case of 1841 and the Dred Scott case of 1857. “The actions of rebels and runaways, freedom petitioners and claimants, black writers and community leaders did not lie outside of but shaped abolition and its goals. As most abolitionists understood, the story of abolition begins with the story of the struggles of the enslaved.”

While ending slavery was the principal cause of their movement, abolitionists were also concerned with other forms of oppression, including the plight of women and laborers, and with the dangers of imperialism, Sinha said. As such, the movement contributed to “discourse of human rights and humanitarianism,” among other causes, the historian contended.

“The cause of the slave became entwined with that of democracy, civil liberties, and the emancipation of women and labor,” she said, adding that the the ideologies and actions of abolitionists helped pave the way for the civil rights movement.

While there were deep divisions among abolitionists over the proper course of action, Sinha said, emphasis on some of these divisions are misinformed and perpetuate racial stereotypes.

“My book narrates a history of abolition in the United States in the transnational context,” she said. “It stresses continuity rather than rupture in the abolitionist tradition, which from its inception was interracial and tied to the development of American democracy. From the early Quakers and black protest against slavery to the rise of the Anglo-American movement against the slave trade in the 18th century to the golden age of abolitionism in the years before the Civil War, abolitionists were united in their devotion to the slave’s cause. The abolitionists’ project of perfecting American — indeed, global — democracy remains to be fulfilled. In that sense, its legacy is an enduring one.”

Following her talk, the other panelists commented on “The Slave’s Cause.” They were: Yale historian David Blight, director of the Gilder Lehrman Center for the Study of Slavery, Resistance, and Abolition; historian Eric Foner of Columbia University; American studies professor Andrew Delbanco of Columbia University; and English and African and African American studies professor John Stauffer of Harvard University. All have written extensively about slavery, abolitionism or the Civil War era, and while they each critiqued aspects of Sinha’s book, they all agreed that “A Slave’s Cause” helps to deepen an understanding of the important role of black slaves and abolitionists. They praised the encyclopedic work as a highly valuable resource and its author for her extensive and thorough research, which she conducted over a 10-year period.

More information about Sinha’s book can be found on the Yale University Press website.