Belarusian women as the agents of the coming change 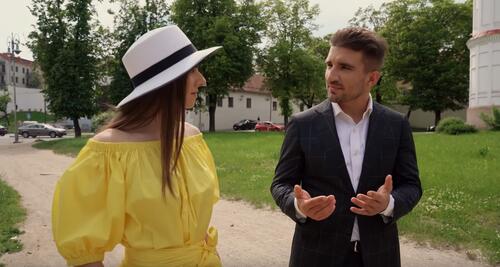 Maksimas Milta, a student in the MA program in European and Russian Studies, wrote and hosted a 10-part series about Belarusian women who have become symbols of the recent freedom movement

The TV show is called “Talaka” and is focused on the role of Belarusian women in the developments of the last year. There are a total of 10 Russian-language episodes. The show is broadcast weekly via the Lithuanian National TV (LRT) and is also available paywall-free via its website. There is also an extended audio version for each of the episodes.

“In traditional Belarusian culture, which is, in many respects, related to Lithuanian culture, there is a concept of collective mutual assistance, voluntary and joint involvement for the fulfillment of common tasks - talaka (in Lithuanian talka). For talaka, the social or another status of its participants is insignificant, in contrast to practical and tangible participation for the sake of a common goal,” says Milta.

The heroines of “Talaka” are an opera soloist (pictured), fashion designer, poetess-businesswoman, political scientist, captain of the national basketball team, feminist, founder of a children’s hospice, media producer, journalist, and the bride of a political prisoner. The portrait of each of them is a direct embodiment of the dramatic and irreversible changes that have taken place in Belarusian society. Even though moving to Lithuania was inevitable for each of them, the everyday life of the heroines of “Talaka” is still focused on the future of Belarus.

The personal stories of those who oppose authoritarianism in Europe are as important today as they once were. Their voices offer an opportunity to highlight the problems within Belarus, draw attention to human rights violations, and show us the fragility of democracy in general. The stories that the heroines of “Talaka” tell in conversation with Maksimas Milta are about the unbearable ease of the transition to tyranny.

Watch the episodes of “Talaka” in Russian on the television network’s YouTube channel here; Listen to the extended audio version of the show here.