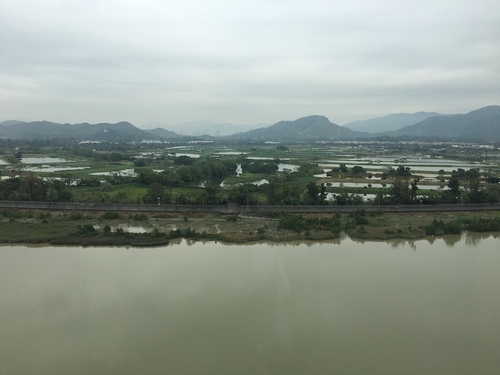 On February 23 and 24, the Council on East Asian Studies (CEAS) in collaboration with the Whitney and Betty MacMillan Center for International and Area Studies at Yale hosted a double panel entitled Bordering China, Bordering Reform. The event was organized by Yale Assistant Professor of History Y. Denise Ho and Assistant Professor of History Taomo Zhou at Nanyang Technological University.

Day One of Bordering China, Bordering Reform’s main theme was the Hong Kong-China border, during the Cold War and into China’s era of “reform and opening-up.” The political economies and identities of peoples living in the Pearl River Delta, Hong Kong, and Taiwan were the focus of the papers as scholars described, in discussant Michael Szonyi’s (Harvard University) words, “the complexity of identities” and “leveraging [of] liminalities.” The Pearl River Delta region has historically been treated as a periphery to the mainland Chinese state center, but through this Bordering China, Bordering Reform conference, audience members were able to understand the transnational, diasporic, and ambiguous sovereignty that shapes the region into a center of its own. Professor Ho, in her paper presentation “Oysterman, Refugee, Coast Guard: Hong Kong and China Between the Tides, 1949-1997,” adeptly articulated how “crossing the tidal boundary” gave the border between the mainland and Hong Kong valence, temporality, and a gamble for a different life: “The border was sometimes a threat, but almost always an opportunity.” Bordering China, Bordering Reform Day One explored the personal and cross-cultural connections that the porous border, both maritime and territorial, fostered and challenged.

Day Two of Bordering China, Bordering Reform’s theme was the temporal border between China’s socialist period and its transition to a market economy, “socialism with Chinese characteristics.” Day Two panelists prepared their paper presentations focused on the political economies and financialization of South China. Andrew Liu, in his paper presentation “The Factories Behind the Storefront: The Four Guangdong Tigers and Diasporic Chinese Capital during China’s Early Reform Period,” characterized the Pearl River Delta region as part of a broader history of economic flexibility at a global level. Certainly, the presenters all pointed out the ways in which the region shaped local, national and global economies via the capital and individual subjectivities and entrepreneurship of the area.