The Buddhist makeup artist: A personal story about sexuality and transformation 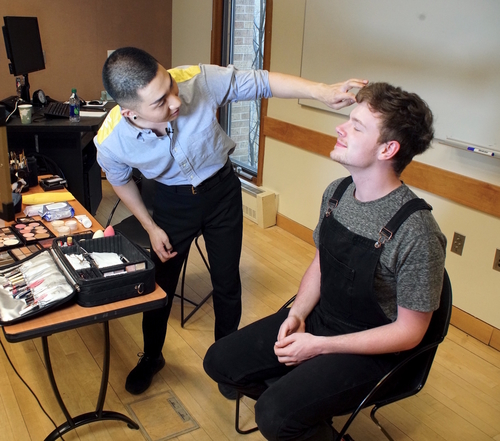 On April 8 the MacMillan Center’s Council on East Asian Studies welcomed Kodo Nishimura, a queer Buddhist priest and makeup artist, to share his personal life story about sexuality and transformation. Nishimura is both a Buddhist priest in the Japanese Pure Land tradition Jōdo Shinshū and a world-renowned makeup artist. His makeup work has appeared on shows such as Miss Universe, and his story has been featured in BBC Radio, Vogue, and The New York Style Magazine among others. The event was co-hosted by Yale’s “Buddhism and Sexuality” class, taught by Professor Hwansoo Kim. Nishimura was introduced by students Chairin Kim, Laurie Wang, and Kaitlin Cardon. (view student makeup session)

Nishimura reflected on his childhood, during which he lived in his parents’ Buddhist temple. Recalling his love of acting and dressing up like Disney princesses as a little kid, he noted that he did not face social seclusion until high school. In high school, he felt he did not fit in with the other boys, who always talked about sports and pretty girls. He did not understand why he felt out of place, questioning “I think I’m funny, I think I’m nice, I think I’m a good person, but why am I alone?”

Hoping that he would be more accepted in the United States, Nishimura “studied English like my life depended on it.” He was admitted to Parsons School of Design in New York City. Nishimura described how he struggled to find his beauty amid slim dancers and well-built football players at the school. He said, “I couldn’t find my beauty, being a Japanese person.”

After graduating with a degree in Fine Arts, he returned to Japan to undergo the training required to be a Buddhist priest. He stressed the difficulty of the training, which included waking up at early hours and chanting until he lost his voice. Nishimuri recalled when one monk revealed he originally thought Nishimuri was queer, using a derogatory term. Nishumuri decided to admit that he was. To his surprise, the other monks came to his defense. “I was very proud,” he said.

He described how he worried that his sexuality and his ascetic Buddhist lifestyle were at odds with one another. The “master monk,” who usually did not speak to monks alone, broke protocol and called Nishimura into his office. Nishimura recalls how the master monk told him that the most important idea of Pure Land Buddhism is that everyone could be equally saved, and that there are no boundaries between man and woman. Feeling validated, Nishimura made a goal to “validate everyone in the world, especially if they are struggling with their identity.”

When an audience member asked him about the value of the strict rules and repetitive rituals of his monk training, Nishimura explained that in meditation and repetitive movement, “I end up being able to find gratefulness.” He noted that instead of praying to a “wooden statue,” the way he first envisioned Buddhism, he was instead “finding peace within my emotions.”

Another question asked about the treatment of gender in Buddhism and other religions. He said that a lot of the discrimination and division “is made by customs that came after the religion’s original writings.” He stressed the importance of studying “why certain customs or beliefs were made.”

After the talk, he demonstrated his artistic ability by choosing a student from the audience to make up. During the makeup session, he shared makeup tips and other tidbits of wisdom.