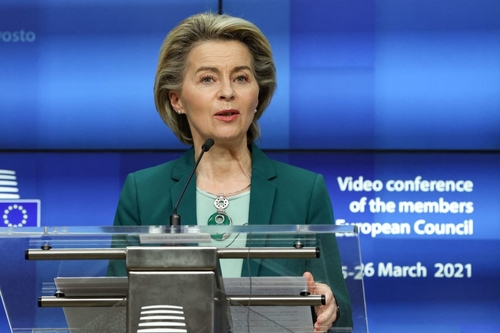 With much of the European Union experiencing another surge in Covid infections, some member states experiencing exceptionally high rates of infection, significant shortfalls in deliveries of vaccine doses, and rates of vaccination that, although increasing, lag far behind those in the UK and U.S., the European Council, comprised of the heads of state or government of the 27 member states of the EU, met by videoconference last Thursday and Friday to discuss a host of important issues – none more important than taking steps to ensure that all of their citizens are protected from the coronavirus, which of course means ensuring there are sufficient supplies of the vaccines to enable the states to dramatically increase the pace of vaccinations.

Last June, in the wake of the first EU-wide wave of the Covid pandemic, the European Commission announced a European strategy to accelerate the development, production and deployment of safe and effective vaccines over the next year to 18 months if not earlier. The strategy, approved by the Council of Ministers for Health, would involve the Commission running a single central procurement procedure on behalf of the member states in which it would secure the production of vaccines in the EU and sufficient supplies for its member states through Advance Purchase Agreements (APAs) with vaccine producers that would include the provision of financial support from a significant portion of the EU’s €2.7 billion Emergency Support Instrument and additional support from the European Investment Bank in order to increase the speed and scale of production of successful vaccines. The APAs would, in return, provide the member states with the right to buy a specific number of doses within a given time period at a given price and would oblige the vaccine producers to deliver the specified amounts of doses according to an agreed-upon, quarter-by-quarter delivery schedule.

It was in the context of the exceptionally large shortfall in AstraZeneca’s delivery of its vaccine to the EU that a conflict arose between the EU and the UK over the export of vaccine from the EU to the UK. In January, the EU proposed making use of the Article 16 “safeguards” provision in the Protocol on Ireland/Northern Ireland contained in the EU-UK Withdrawal Agreement to block the export of Covid vaccines to the UK. The decision to use the Protocol for that purpose was quickly reversed but it highlighted the evident desperation in the EU to block exports of the vaccine to the UK at a time when the UK’s rate of vaccination was significantly greater than that in the EU. And while backing off from using Article 16, the EU continued to block the export – in particular, the export of AstraZeneca vaccine from the plant of Halix, one of its subcontractors, in Leiden – to the UK. As European Commission President Ursula von der Leyen put it in an interview, “We have the option of banning a planned export. That’s the message to AstraZeneca: You must fulfil your contract with Europe first before you start delivering to other countries.” Needless to say, that decision and those words prompted a war of words between UK and EU officials.

Last Wednesday, the disagreement between the EU and UK was resolved (at least on paper) when the Commission and the British government issued a joint statement in which they acknowledged that “we are all facing the same pandemic and the third wave makes cooperation between the EU and UK even more important….We have been discussing what more we can do to ensure a reciprocally beneficial relationship between the UK and EU on COVID-19. Given our interdependencies, we are working on specific steps we can take – in the short-, medium- and long term – to create a win-win situation and expand vaccine supply for all our citizens.” What the EU and UK will do to ensure a “reciprocally beneficial relationship” between them remains to be seen.

But also on Wednesday, the Commission adopted an implementing regulation pertaining to a regulation adopted in January that made the export of Covid vaccines and the active substances used to manufacture those vaccines subject to export authorization. Last Wednesday’s implementing regulation stipulates that such authorizations “are to be refused by the Member States where the exports concerned pose a threat to the execution of the Advanced Purchase Agreements (APA) between the Union and vaccine manufacturers in view of their volume or other relevant circumstances, such as the volume of vaccines delivered to the Union at the time of the request.” In other words, if the manufacturer hasn’t met its agreed-upon deliveries to the EU at the time of the request for an export authorization, it won’t be granted. Taking note of the fact that there is still “a lack of transparency as well as persisting constraints on production of COVID 19 vaccines and delays in the delivery in the Union, which may pose a threat to the security of supply within the Union,” the regulation suggests that “additional elements” should also be considered in deciding whether to grant or refuse an export authorization. In order to prevent vaccines from being exported through countries that have thus far been exempted from the export authorization requirement, last week’s regulation temporarily suspended those exemptions.

After discussing the issue at some length in their videoconference last Thursday – a discussion that was further extended by discussion over how the accelerated delivery of 10 million doses of the BioNTech-Pfizer vaccine originally scheduled for delivery in the second quarter should be distributed (whether proportionally according to population or on some other basis) – the leaders issued a statement in which they said accelerating the production, delivery and deployment of vaccines remains essential and urgent and efforts toward that end must be intensified. And they underscored the importance of transparency and the use of the export authorization mechanism and emphasized that “companies must ensure the predictability of their vaccine production and respect contractual delivery deadlines.” As for the squabble over the distribution of the early delivery of the 10 million BioNTech-Pfizer doses, they said the current pro-rata population key should be used and invited the Permanent Representatives to deal with the distribution question.

At her joint press conference with European Council President Charles Michel after the long videoconference, after noting that the EU is at the start of a third wave, largely as a result of the rapid spread of the B.1.1.7 variant, and needs to move quickly on vaccinations, von der Leyen said, “But of course, we all know, we could have been much faster if all pharmaceutical companies had fulfilled their contracts. Now looking forward to the second quarter, we basically see the same picture: We have BioNTech and Moderna that have been delivering very reliably and according to schedule and contract. Thus, we expect that they will increase their deliveries, as is contracted, in the second quarter….Additionally, we see that Johnson & Johnson is kicking in the second quarter.” But, she noted, “AstraZeneca has committed to a lower number of doses than was contracted. Here, Astra Zeneca has committed to 70 million doses instead of the contracted 180 million doses.” Nevertheless, she said, “we are on track to achieve our goal: that this summer, we want to have 70 percent of the adult population in the EU vaccinated.” Referring to the regulation the Commission adopted the day before, she said “I also presented to the Leaders the latest changes for the transparency and export mechanism for exports of COVID-19 vaccines. You know that yesterday we added to the scope of this mechanism the criteria of reciprocity and proportionality. Just to be very clear: We want to make sure that Europe gets its fair share of vaccines. Because we must be able to explain to our citizens that if companies export their vaccines to the whole world it is because they are fully honouring their commitments and it does not risk security of supply in the EU.”

It’s perhaps understandable, for the reasons von der Leyen mentioned in her statement, why the EU reverted to a supranational version of “vaccine nationalism” last week in the wake of AstraZeneca’s failure to deliver the doses it had contracted to deliver and the company’s proposals, instead, to export doses made in the EU to non-EU states, including one – the UK – that is already far ahead of the EU in the extent to which it has vaccinated its citizens. But ultimately, the problem facing the EU – how to ensure that its citizens get the doses as soon as possible – won’t be solved by the EU’s atypical lapse into “vaccine nationalism” (or, in this case,  “vaccine supranationalism”). The problem will only be solved when the EU takes whatever steps are necessary to ensure that all of the firms with which it has contracted for vaccine doses deliver the doses they have agreed to deliver.

Last Friday, the EU’s European Medicines Agency took an important step in that regard, both in resolving the UK-EU dispute and, more importantly, in alleviating the current shortage vaccine doses in the EU. It approved the Halix plant in Leiden for production of the active substance in AstraZeneca’s vaccine, thereby increasing the latter’s number of manufacturing sites in Europe to four. The EMA also approved a new site in Marburg, Germany for producing both the active substance and the finished product of the BioNTech/Pfizer vaccine, increasing the number of its manufacturing sites in Europe to four as well. Coupled with the EMA’s approval the week before of a new site for producing the active substance and finished product intermediates of Moderna’s vaccine at the Lonza plant in Visp, Switzerland, these approvals will substantially increase the supply of the vaccines – and, hopefully, enable Europe to defeat the third wave that’s being driven, at least in part, by the even more highly-contagious B.1.1.7 variant.