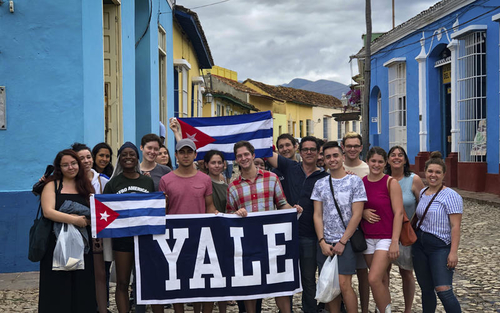 The cornerstone of the Council on Latin American and Iberian Studies (CLAIS) Cuba Initiative is an undergraduate course (History and Culture of Cuba) that includes a two-week class trip to Cuba during spring break. Professor Albert Laguna and Dr. Reinaldo Funes-Monzote, CLAIS Visiting Professor and Professor of History at the University of Havana, co-teach the course and travel with the students to Cuba.   Listen to students talk about their Cuban experience and see photos from trip.

The following article was written by Alison Hall Kibbe, a doctoral student in African-American Studies & American Studies and a CLAIS graduate affiliate, who accompanied the students to Cuba: 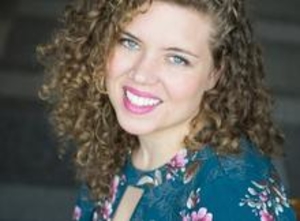 I was raised on stories of Cuba. As I sat around the domino table, struggling to clutch the smooth ivory cards in my small hands and learning the logic of “reading” the table, my grandfather, Frank Robertson, entertained us with his memories of growing up in the small town of Esmeralda, Camagüey, Cuba. These were tales of youthful adventures — skipping school to steal watermelons from a local farmer, various schemes to get a pack of young boys into the movie theater with only one nickel, and jumping a sugar train that ran through the town.

My grandfather was born in Cuba in 1920, the son of two immigrants pulled to the island during the sugar boom. His mother was Jamaican and part of the wave of black Caribbean migrants that made their way to Cuba in the early twentieth century, drawn by the jobs created by U.S. investment in central and eastern Cuban sugar mills. His father was part of the ongoing waves of Spanish migrants, recruitment of whom intensified as the Cuban elites strove to make Cuba a “modern” nation by attracting more white European migrants through “blanquemiento” (whitening).

My grandfather left Cuba in 1934, during the height of the Great Depression when jobs were scarce and black migrants not welcome. The story goes that his mother, Hilda Robertson, won the lottery in Cuba and with this money she and her husband brought her eight children to Jamaica. My grandfather was fourteen. In Jamaica, he learned English, finished his schooling, and after marrying eventually moved to Jamaica, Queens, New York. While he was never able to return before his passing, my grandfather kept a connection to Cuba alive. I inherited his memories and a desire to know the place that despite many moves, he always considered home.

This is what drew me to Cuba and spurred a number of questions about this island that was so close, but at times felt impossible to reach. As an undergraduate at Duke University, I tried everything possible to study abroad in Cuba, but because of the legal restrictions at that time, it was not possible. It was not until after I graduated and I began working with a number of arts and culture exchange programs that I had the opportunity to visit, and later live in, my grandfather’s natal land. Over the past four years I have had the opportunity to collaborate on a number of projects on an off the island, including working with music students and musicians with Horns to Havana, working with former ‘alfabetizadoras’ who volunteered in the 1961 Cuban Literacy Campaign, helping produce documentary films, and conducting my own research about multiracial identity and migration in and through the Caribbean in affiliation with the Casa del Caribe in Santiago de Cuba. It was these experiences that propelled me decide to begin my doctoral work here at Yale exploring questions of migration, movement, and identity in and through the Caribbean. A journey that began with retracing my roots has transformed into making my own routes and life in and through Cuba.

This is part of why I was so honored to be a part of Yale’s 2019 History and Culture of Cuba trip, during which time I got to experience the curiosity, eagerness, and urgent questions of the undergraduate students as they struggled to make sense of the complexity of life in Cuba. I had the opportunity to view a place that has become home through their fresh eyes. As we traveled through Havana, Vinales, Matanzas, and Trinidad attending lectures with leading scholars, visiting important ecological, agricultural, and historical sites, and participating in local life as much as possible during a fourteen-day stay, I witnessed them navigate that magical space between what they had read on the page and heard in lecture and what they were seeing and experiencing on the ground. After a night out, they wanted to know more about how social spaces reflected the impact of the tourist economy and the origins of Cuban music. A sign displaying entry prices to the theater probed questions about how the nation navigates the double currency of the CUP and CUC. A drive through the country brought up questions about agricultural policy and practice. A lecture on Afro-Cuban religious practice provoked questions about the differences between western and eastern Cuba and about the relationship between Cuba and other Caribbean nations.

As I fielded an array of thoughtful and probing questions about race, class, gender, sexuality, agriculture, labor, migration, and regional differences I found myself struggling to come up with answers that would reflect the prismatic complexity of what I knew about Cuba. Mostly, I found myself repeating, “Experience it now, analyze it later.” This was not an attempt to defer a response or dampen their insightful questions, but rather my effort to urge them to soak up everything there was to experience. Experiential learning challenges us to move beyond the comfort of easy analysis or categorization, and live with the much more interesting realities of complex relationships and networks.

Like many places, Cuba defies simplistic descriptions, even as it is often victim to them, depicted as “isolated” and “stuck in time.” On our last night in Cuba, we went to the Havana World Music Festival, where we saw incredible bands from Cyprus, South Korea, Canada, and of course, Cuba. The headliner, Cimafunk, is a current sensation, a musician, composer, and producer from the western province of Pinar del Rio who combines funk music, Afro-Cuban rhythms, and Afrobeat. Our students blended into the crowd of young Cubans enjoying this evening of musical and cultural exchange, experiencing Cuba’s connection to international networks not through reading or a lecture, but sensorially; they heard, felt, saw, and became a part of this exchange.

The first visit to a new place is full of incredible potential. One has no idea where it may lead and what doors it may open. My first trip to Cuba shifted my life course. For the students in the History and Culture of Cuba class, I see a variety of possible pathways emerging from the experiences and inquiries of this trip. While we cannot see where those pathways go, we know that only by creating opportunities for students to experience and do, can these possibilities emerge.