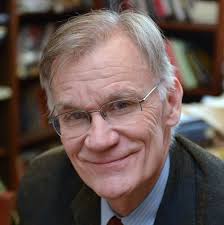 David W. Blight, Class of 1954 Professor of American History and director of the Gilder Lehrman Center for the Study of Slavery, Resistance, and Abolition was awarded a 2019 Pulitzer Prize in the history category for his new biography on Frederick Douglass, the escaped slave who became a prominent activist, author, and public speaker. Titled Frederick Douglass: Prophet of Freedom, Blight’s book was lauded for being “a breathtaking history that demonstrates the scope of Frederick Douglass’ influence through deep research on his writings, his intellectual evolution and his relationships.” (Watch Blight’s interview about his book)

In the biography, Professor Blight has drawn on new information held in a private collection that few other historians have consulted, as well as recently discovered issues of Douglass’s newspapers. Blight tells the story of Douglass’s two marriages and his complex extended family. Douglass was not only an astonishing man of words, but a thinker steeped in Biblical story and theology. There has not been a major biography of Douglass in a quarter century.

Professor Blight is the author or editor of a dozen books, including American Oracle: The Civil War in the Civil Rights Era; and Race and Reunion: The Civil War in American Memory; and annotated editions of Douglass’s first two autobiographies. He has worked on Douglass much of his professional life, and been awarded the Bancroft Prize, the Abraham Lincoln Prize, and the Frederick Douglass Prize, among others. It was also selected as a New York Times, Wall Street Journal and Time Top 10 Book of the Year.

The Gilder Lehrman Center (GLC) for the Study of Slavery, Resistance, and Abolition is supported by the Whitney and Betty MacMillan Center for International and Area Studies at Yale. The GLC strives to make a vital contribution to the understanding of slavery and its role in the development of the modern world. While the Center’s primary focus has been on scholarly research, it also seeks to bridge the divide between scholarship and public knowledge by opening channels of communication between the scholarly community and the wider public.

Learn more about the GLC.

‘Quite the jewel’ – honoring David Blight and his new Douglass biography