The Death of the U.S.-Iraqi Relationship 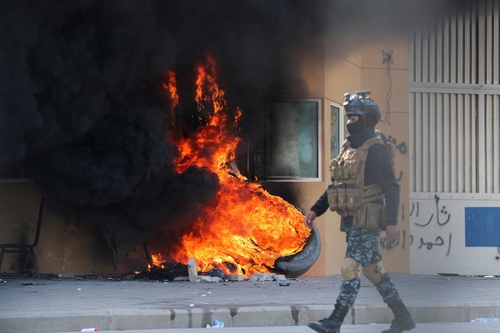 The assassination of Iranian General Qasem Soleimani on the outskirts of Baghdad was a major escalation in the conflict between the United States and Iran. But the U.S. drone strike that killed the powerful commander of the Quds Force within Iran’s Islamic Revolutionary Guard Corps might claim another casualty as well: the U.S.-Iraqi relationship. Allied with both the United States and Iran, Iraq now finds itself as the frontline battleground for these two foes.

The precarious state of Washington’s relationship with Baghdad was apparent even before the United States killed Soleimani on January 3. It was thrown into stark relief on New Year’s Eve, when Iraqi security forces looked the other way as hundreds of Iraqi militia supporters attacked the U.S. embassy in Baghdad’s Green Zone. Embassy staff were kept under lockdown and U.S. Apache helicopters hovered overhead as the pro-Iranian militia supporters breached the outer cordon, burned American flags, ransacked guard posts, and sought to scale the walls before U.S. marines pushed them back with tear gas. (go to full article)

Emma Sky is director of Yale’s Maurice R. Greenberg World Fellows Program and a Senior Fellow at the Jackson Institute, where she teaches Middle East politics. She is the author of the highly acclaimed The Unravelling: High Hopes and Missed Opportunities in Iraq (2015) and In a Time of Monsters: Travelling in a Middle East in Revolt (2019).