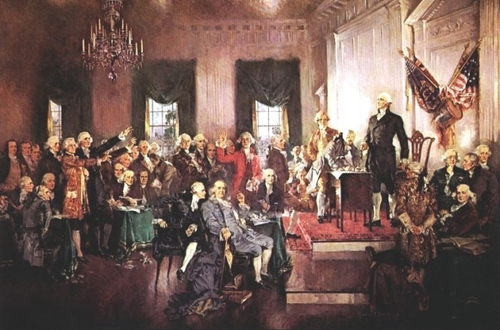 For the Henry L. Stimson Lectures on World Affairs in October, the Whitney and Betty MacMillan Center for International and Area Studies at Yale hosted Douglas Rae, Richard Ely Professor of Management Emeritus at Yale. His series of lectures was titled “Capitalism: Knowledge Drives Wealth.” Rae is a distinguished political scientist and was lauded by Ian Shapiro, Sterling Professor of Political Science, in his introduction as a master of self-reinvention who has written on a number of topics including economics, American government, business over the course of his academic career.

Rae’s lectures addressed the place of capitalism in the United States, outlining its merits, pitfalls, and history. Rae insisted that while he is not a committed capitalist, he is committed to learning from capitalism.

In his first lecture on October 22, “What the American Founders Got Wrong,” Rae set the scene at the beginning of the early modern period when, according to him, “almost everything intellectually wonderful” took place. He presented a list of the thinkers and movements of this period—from the Renaissance to Reformation, from the Enlightenment to the collapse of European Feudalism. This Green Period, as he called it, was notable both for the brilliance of the intellectual production and for the nearly pristine natural environment. The world until 1750 was, from an environmental perspective, about how it had been for the last thousand years. With this clean environmental slate, industry started to grow and capitalism took hold in the late 18th century. (view lecture 1)

Rae then delineated what corresponded with the coming-on of capitalism. There was increasing civility, a great surge in incomes and wealth accumulation, an increase in the apparent intelligence of children, and a social intelligence carried by market economies rather than individuals. He argued further that capitalism has destroyed the natural environment and the attempt to recover it will place great strain on both market and government institutions. Finally, he concluded that capitalism generates huge inequality and catastrophic rates of economic insecurity. Throughout the talk, Rae drew a connection between governmental structure and capitalism. He defined capitalism as a hands-off way of arranging a society within a government. His claim, by the end of the lecture, was that the Founders were wrong to create a defensive armature around national power. The American system of government makes it impossible to defeat any status quo arrangement, so long as it is in effect, no matter how wasteful or unjust it is.

Rae argued that other than existing as an auto-pilot button for the government, capitalism has other distinct features. A second feature of capitalism is that the means of production are privately held. The third feature is that firms are free to decide what and how to produce. He put forth that any healthy capitalist economy has a considerable degree of chaos. Fourth, there must be free labor (not slave labor). And finally, the accumulation and distribution of knowledge is central to capitalism. The ultimate basis of society’s wealth is the accumulation of knowledge, which he referred to as the cycle of innovation.

In his second lecture on October 23, “When Markets Force Learning: America in the 19th Century,” Rae began by finishing up the first lecture. He reiterated his point about the natural world. The founding fathers, he argued, were not strict Christians but were instead interested in molding, conquering, and understanding the natural world. American systems of government were not born of any strict anti-religious sentiment, but of the idea that prosperity and health were in the hands of man, not God. (view lecture 2)

Rae then turned back to inequality. He addressed the root of the problem by projecting a painting of the Constitutional Convention onto the board. “We the People,” he insisted, was a toxic misnomer. The Constitution was drafted by narrow elite for the small percentage of the population that was enfranchised. Rae hinted that this rigid status quo that excluded women, slaves, and non-property holding men would have a lasting effect on the economy. He offered numerous statistics and examples, but two stood out to the audience: 1) Households headed by women have significantly higher rates of impoverishment and 2) Six percent of American families in any two-year period can expect to lose at least half their income. Rae stressed that many American households have realistic reason to believe they might fall off the edge in any given period.

Rae returned to his theme of the status quo in government. He illustrated the kind of gridlock he’d been referencing by citing four urgent matters for the country which has bipartisan support, and yet, seem hopeless. A first neglected proposal: carbon restriction or carbon tax. Next, the overwhelming expense and inefficiency of healthcare. Third, immigration policy and the country’s growing demographic crisis. And finally, simple gun control.

In his final lecture on October 24, “America’s Unequal Capitalist Republic,” Rae explained that his goal was to celebrate capitalism as an adventure in learning. He argued that enterprises on any level are always experiments—most fail, but some succeed spectacularly. (view lecture 3)

He began by outlining the difference between precision and accuracy. He showed examples of things that were precise, but inaccurate, then things that were accurate, but imprecise, and so on. He explained that reliability is about functioning many times without failure. Reliability is an economic question, as well as a social one. He cited examples of some of the great heroes of reliability and some of the great inventions of reliability. These examples led him to a discussion of mass production of bits and pieces, precise and accurate products of capitalism that enabled the growth of capitalism.

Something the founders did get right was that a civil commonwealth of practical knowledge would become the foundation of America’s future wealth. He argued that the founders, for the most part, wanted delay and deadlock for stability of the new nation. The outlier, in Rae’s eyes, was Alexander Hamilton. Hamilton was largely responsible for moving America to a more industrial model. In his Report on Manufacturers, Hamilton insisted that industry was vital to the prosperity of the country.

Rae then discussed a few corporate giants whose success was tied to industry as well as reliability and precision with oil. He talked about a Dartmouth student who saw the possibility of making money in oil, the subsequent rise of oil, and then Seneca Oil. He talked about John D. Rockefeller and Standard Oil. Then Rae mentioned the development of railroads and Rockfeller’s business tactics, uniting the profits of oil and rail. He talked then about Henry Ford and the assembly line car production, which made it possible for working class people to afford something which has previously been a luxury for elites.

Rae concluded his three-lecture odyssey of American government and industry by claiming that the wealth of our capitalist experience lies in the knowledge generated up to now. We are not ideally suited to deal with the problems we face, Rae insisted. In fact, we are a long way from being equipped to make fundamental decisions, but it is worth our time to explore further. He returned, for a final note, to Hamilton. Hamilton was right that perpetual learning is the core value of a free society. Our own society is an imperfect embodiment of Hamilton’s vision, and yet, it is relatively robust and resilient.