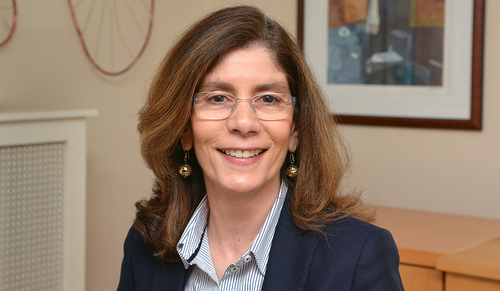 Two months ago, Yale economist Pinelopi Goldberg wasn’t working on anything related to global health. But like many scholars, she has recently shifted her research focus to questions bearing on the COVID-19 pandemic.

The former chief economist at the World Bank Group is now studying policy responses to the crisis in developing countries and collaborating with colleagues at Yale’s Center for Economic Growth to collect data on COVID-19’s effects on low-income populations.

Goldberg, the Elihu Professor of Economics in the Faculty of Arts and Sciences, recently spoke to YaleNews about contrasts between rich and poor nations, the risks of lockdowns, and scholarship in a time of crisis.

How are you responding to the pandemic through your research?

COVID-19 is the greatest global challenge since World War II. I think it’s fair to say that a number of economists are putting aside their normal research to focus on it.

The response to the crisis and the pandemic’s effects are fascinating from a social-science perspective. There will be research agendas associated with COVID-19 for years to come. I have questions myself that I’d like to pursue, but for the moment, I am focusing on policy responses, being fully aware of my limits because I’m not a health economist.

I’ve been thinking hard about appropriate policy responses in developing countries. So far, most of the discussion has focused on advanced economies in Europe, the United States, and East Asia, which is understandable because the virus struck these places first. By now the whole world is affected, including low- and middle-income countries that are facing particular challenges.

What unique challenges do developing countries face in confronting the pandemic?

Many developing countries have adopted exactly the same policies that more advanced economies have implemented, such as lockdowns, but they face additional challenges. We should think seriously about whether this is the best approach to tackling the crisis in low-income settings. By the way, I always apologize when I use the term “developing countries” because there is enormous heterogeneity among these countries. It’s inappropriate to throw them into one bucket, but it makes it easier when one gives an interview, and in this case, what they have in common is perhaps more important than what differs among them.

No matter what happens on the health front with COVID-19, developing countries will face an enormous economic crisis. Capital outflows from developing countries have been unprecedented. Some countries that used to be in good standing before the crisis are now faced with the prospect of sovereign default. Commodity prices have collapsed. Remittances from immigrants working in other countries are falling dramatically. Tourism revenue is disappearing and some countries rely heavily on it. It is an immense and unprecedented economic crisis. If, on top of this all, you impose lockdowns that affect disproportionately the poor working in the informal sector, you make a dire economic situation even worse.

What strikes you as the best way for policymakers in developing countries to respond to the crisis?

Context matters and there is no one-size-fits-all approach here. I’ve been very skeptical of the strict lockdowns that many developing countries have imposed. Their benefits are questionable in settings with high population density, urban crowding, and poverty. When people are crowded into urban slums, it is not clear you can get the benefits of physical distancing. At the same time, the costs are extensive — much larger than in advanced economies.

Many people work in the informal sector and rely on daily wages. If you don’t let them work, you throw them into poverty overnight. People in developed countries are facing hardship, but there is a social safety net — in some countries more so than in others. The United States managed to pass a $2 trillion package to provide relief. Many countries don’t have the fiscal space to do this, so the economic consequences are more severe.

Poverty isn’t just about money. Poverty in low-income settings costs lives. There are worries that in some areas people might not be able to perform agricultural work. There may be food shortages as a result and disruptions to food supply chains. This may lead to price hikes. It may lead to hunger and famine. There is disruption to standard health care: no vaccinations for a while, no pre-natal care. There is a real price not just in terms of money, but also in terms of human lives. All of this must be considered when thinking about the proper policy approach.

Do developing countries possess any advantages not found in wealthier countries?

I think developing countries have two advantages relative to rich countries concerning public health. The first is that they tend to have much younger populations. We know that COVID-19 affects disproportionately the elderly. An extreme example is Niger where the median age is 15. When half of your population is under the age of 15, perhaps COVID-19 is not your most pressing public health issue.

Another advantage is that the coronavirus spread to Sub-Saharan Africa and South Asia relatively late. The first case reported case was in December in China. We’re now in May and we have much more information about the virus, although there is still a lot about it that we don’t understand. We have a good sense of which groups are at the greatest risk. We know the virus hits the elderly particularly hard. Again, in developing countries, this may be less severe an issue — not because we don’t care about the elderly, but because there are fewer elderly people as a fraction of the total population. We know certain pre-existing conditions, such as diabetes, heart disease and obesity, make people more vulnerable.

One approach would be to target interventions toward the most vulnerable groups. This is easier said than done because in low-income settings, the very vulnerable live together with those who are less vulnerable. The elderly live with their younger family members in the same households. It would take some creativity to figure out how to protect people, but I think this is where efforts should focus.

Testing and tracing is widely seen as a key to preventing outbreaks while allowing economies to reopen.  Do you see potential for implementing such measures in developing countries?

Another advantage that some developing countries have, especially countries in sub-Saharan Africa, is that they’re not highly connected to the rest of the world.  Low connectivity is usually a disadvantage, but in this instance, it turns out to be an advantage. It is one reason the virus arrived late in these countries. Low connectivity also means that it’s easier for countries to isolate themselves. Testing and tracing might be more successful and easier to implement in such countries because you have fewer cases overall. But it needs to be tailored to the specific settings. If you have an international metropolis, like New Delhi in India, it is very hard to effectively implement such an approach. It might be easier to pull it off in less-connected cities.

One problem with the testing and tracing approach is that it does not work when there is a high asymptomatic rate. If the virus has already spread, testing and tracing by itself cannot turn things around. It is more likely to prevent outbreaks when it is employed very early along with quarantines of those who arrived from other countries. In my opinion, it would have been a very sensible approach in many countries with low connectivity — compared to New York City, there are simply not that many people who arrived in Kigali or Maputo from abroad in February or March. It would have been relatively easy to test recent arrivals and trace their contacts or outright quarantine them rather than locking down entire countries.

You’re involved in a project to gather data on the pandemic’s effects in developing countries. What kind of information is being collected?

We need to collect real-time data to see how the crisis affects people in different settings, especially in rural areas. These people are often not captured in official surveys. It also takes a lot of time for survey data to be collected. My colleagues at the Economic Growth Center are collecting information on potential price hikes and on how people in rural areas are affected by the crisis. Do they face food shortages and economic hardship? We need to understand how they are being affected before we can recommend sound policies to help them.

Have you had to adjust your approach to research in order to reach conclusions more quickly?

Yes, we need to respond much faster, which requires a complete change of mindset. As academics, we tend to take our time doing research. We spend a lot of time designing surveys, figuring out the right sample design, and cleaning, processing, and analyzing the data. It can take years to come to truly robust conclusions. In this case, we don’t have the luxury to do that.

I do believe academic economists have a lot of value to add because we tend to think about things critically. We question assumptions. We take nothing for granted and we take a scientific approach to studying questions. If we need to take shortcuts due to time constraints, at least we are aware of them and acknowledge them. We have an important role to play in understanding the effects of the crisis and how best to address them.