Elections under oppression in Cambodia: a predictable outcome? 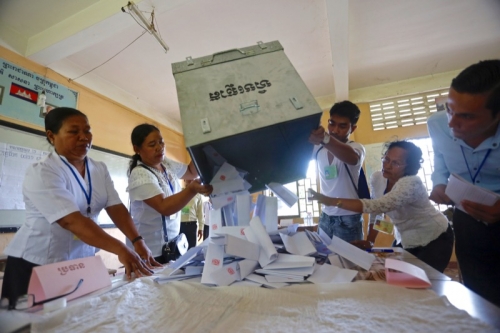 On July 29, 2018, another parliamentary election was held in Cambodia. When the commune elections had been held on June 4, 2017, they were followed by complaints and recounts, but the official results showed that the two major rival parties had won the majority of votes: the ruling Cambodian People’s Party (CPP) received 1,156 communes (out of 1,646) while its opposition party, the Cambodian National Rescue Party (CNRP) won 489. The Khmer National United Party received only one.

Although the CPP, which has controlled Cambodia since 1979, retained a ‘significant’ majority at the commune level, its grassroots support had clearly decreased since 2012, when it had won 1,592. By contrast, the CNRP had seen a twelvefold increase in its support, having won in only 40 commune councils in 2012.

Many local and international observers of the commune election deemed them acceptable because although there were intimidations, there was no violence during the campaigns or on election day. However, the leaders of the CNRP and some civil society groups claimed that the election was neither ‘free’ nor ‘fair’ since it had been organized under an oppressive political regime and threats of violence had been made by CPP officials, who warned that a CNRP victory would mean ‘civil war’, and that they would crack down on any protests about the election.

As many may know, Cambodian elections since those supervised by the UN in 1993 have never run smoothly. The 1993 elections were the first national elections that had been held in Cambodia since the fall of the Khmer Rouge “Killing Field” era in 1979.  Various forms of violence took place both before and after each election as the CPP struggled to maintain a grip on power. Over the past three decades, the CPP has consolidated its hold through nationwide networks of patron-client relationships that link its members and activists from grassroots communities vertically to central patrons comprising the party’s leader – Prime Minister Hun Sen and his high-ranking officials. It has consistently used various methods of intimidation to suppress popular opposition parties – the royalist party FUNCINPEC, the Sam Rainsy Party and the Cambodian National Rescue Party (CNRP).

This struggle by the CPP to gain a total monopoly on power has resulted in a steady deterioration of the social and political atmosphere in the country. After the CPP unexpectedly lost twenty-two seats in the 2013 parliamentary election, the party’s crackdown on human rights led to a rapid worsening of the situation. The government has since intensified its use of violence, arrests and imprisonment of critics and tried to frighten voters into voting only for the ruling party. There have been brutal assaults on and arrests of CNRP officials, rights activists and independent analysts. Peaceful protests against violations committed by government officials and their affiliated oligarchs that have been organized by civil society groups, garment workers and victims of land grabbing have also been suppressed with violence and killings.

This has all been facilitated by the fact that the entire judiciary is controlled by the powerful and can therefore be used to arrest anyone who dares criticize the government.

However, the CPP’s violent tactics seemed to have little effect on many voters in recent years. Perhaps they succeeded in preventing the CNRP from winning an outright majority in the 2013 elections (the CNRP won 55 parliamentary seats and the CPP, 68), but the CNRP continued to gain support after the election. Although the CPP leaders continued to trumpet their “achievements” since 1979 and make promises of a better future, support for them has steadily declined over the last fifteen years. The ruling party has shown itself unable to address the most pressing social problems and is indeed accountable for the increase in government corruption and power abuse. Officials are appointed through personal connections, human rights violations continue apace in the form of land grabbing and evictions of people from their homes and farms, economic disparity and dire poverty persist among many rural Cambodians, and unemployment rates remain high, particularly among young graduates who try desperately to find jobs in other countries in the region.  At the same time, many young voters (approximately 70 percent of the population was born after the “Killing Fields” era of 1975-1979) are now demanding a better standard of living, modernization, growth and development. Yet, the current leaders are failing to deliver. Since the young do not suffer residual fears after the Khmer Rouge regime of terror, they are less intimidated than their parents by threats from the leaders and many are keen to become active ‘agents of change’.

Dissolution of the CNRP

Following the outcomes of the 2013 national election and 2017 commune elections, the CPP realized it now faced a serious challenge to its long reign. The 2018 national election loomed large as an even greater threat to its political survival. For rich CPP officials, losing the elections would mean losing not only power but wealth: property and business rights. The elections thus become a major “threat” to their privileges and profits. In November 2017, fearful of revenge by the opposition for his role in such events as grenade attacks in 1997, and numerous other instances of brutality and imprisonment of his opponents, Prime Minister Hun Sen decided to dissolve the CNRP and ban 118 senior CNRP officials from engaging in any political activity for five years for allegedly conspiring to overthrow the government.

The CNRP was the result of a merging in 2012 of two earlier parties – the Sam Raingsy Party and the Cambodian Human Rights Party. Its leaders and activists carried out extensive outreach, established large networks and attracted financial support from overseas Cambodians, particularly from the Cambodian diaspora in the US, France, Canada and Australia. They have been so keen on using various ‘blame-and-shame tactics’ accompanied by vengeful, hate-filled speeches, insults and personal attacks levelled at the CPP’s leaders, and racial discrimination against Vietnamese citizens living in Cambodia. The CPP saw their campaigns as “adding fuel to the fire”, and hostility increased among the leaders and their networks. Even after the dissolution of the CNRP, CPP officials continued to prevent any resistance or movements for change inspired by the CNRP. They used state resources and instruments to crack down on gatherings of CNRP supporters, claiming that the CNRP’s provocations would lead to a civil ‘war’ between those with different political views if it won the election.

With the CNRP paralyzed, twenty new political parties were established prior to the 2018 parliamentary election. These fledgling parties tried to mobilize young voters, supporters of the former CNRP, and people who were fed up with the CPP and were seeking an alternative.

Although the leaders pledged to ensure that the elections would be free and fair, the new parties faced several barriers that would make it impossible for them to win a majority. They were new and small and lacked resources to reach out to people nationwide. They also faced interference and intimidation from local authorities in many areas. They were forbidden access to TV and radio channels for campaigning since all TV stations and most radio channels are owned by government officials and their cronies.  The National Election Committee (NEC) is completely controlled by the CPP, all the way through from the top management team to electoral officials in provinces, districts and communes. And the fact that so many foreign independent election observers withdrew from the 2018 elections also made election fraud all the easier. Moreover, when it came close to the election, those new parties intensely faced fierce boycott campaign of CNRP’s leaders accusing them of puppets of Hun Sen and thus calling their supporters not to vote for them.

Today, Cambodia has no moderating or coordinating body to ensure peace and stability in the country when disputes occur between conflicting parties. All the powers of the state (i.e. legislative, executive and judiciary) rest in the hands of the ruling CPP, and the current king is largely a “legitimizing tool” of the rulers. Although the king is the constitutional head of the state with the authority to mobilize the armed forces in the event of an external threat to the nation, he has proven impotent to reduce political tension within the country.

After all, despite many questions about legitimacy of the planned election, criticisms and condemnations by many countries and civil society groups for the dissolution of the CNRP, the CPP effectively silenced the opposition in the country and was set to win by landslide the recent election (after receiving 76.85 percent of 6,956,900 votes). Fearful of voting for any party other than the CPP, most people cast their votes for the ruling party regardless of what they truly wished for. Many others went to polling stations only to cross out their votes, rather than voting for the ruling party or the new ones. NEC’s recent preliminary result showed that over 84 percent of registered voters went to vote and all 125 parliamentary seats go to the ruling party, CPP. This allows the CPP to form a one-party government that rules over both the judiciary and the parliament as it did in the 1980s and early 1990s.

In this climate of fear, as many independent intellectuals and civil society groups have suggested, a real change is going to require renewed involvement by the international community, the UN, the signatories of the Paris Peace Agreement and donor countries to bring back hope of free and fair elections. Failing this, the fate of the poor in Cambodia will be to continue suffering at the hands of today’s ‘kleptocratic’ authoritarians.

Written by Sreang Heng, a former visiting scholar at the Council on Southeast Asian Studies, Yale University (December 2016 to August 2017). He is now a research fellow at Harvard Kennedy School.