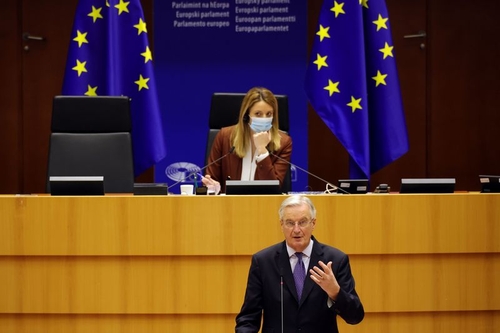 At midnight on December 31, the UK will leave the EU’s internal market and customs union, with or without an agreement regarding their future relationship. If an agreement is to take effect at that moment, it will have to have been approved by the UK government and parliament, the EU member states, and the European Parliament prior to that moment. Last Thursday, after receiving an update on the negotiation from Michel Barnier, the EU’s chief negotiator, and anxious, given all that would have to be done—the text put into formal language, then scrubbed (i.e., vetted) by the lawyers, then translated into at least some of the EU’s 24 official languages—before the Parliament could review and vote on an agreement in time for it, if approved, to take effect as of midnight on December 31, the Conference of Presidents of the Parliament’s political groups said it “stands ready to organize an extraordinary plenary session towards the end of December, in case an agreement is reached by midnight on Sunday 20th December, for the European Parliament to debate the outcome of negotiations and consider granting its consent.”

But to no one’s surprise, midnight Sunday came and went without an agreement, the negotiators still some distance apart on the two key issues that have divided them since the start of the negotiation in March—how to maintain a “level playing field” between British and EU businesses in terms of state subsidies and health, labor and environmental regulations, and how to allocate access to and catches taken in UK waters by EU fishermen and women. The first, which is vastly more important to the overall trading relationship between the EU and the UK, is largely resolved, although a number of details in regard to a “rebalancing” mechanism that would apply when the rules and regulations of one side change and possibly create a competitive advantage are still being worked out and drafted. But the second, which involves only a very small portion of the UK and EU GDP but is exceptionally important symbolically—and politically—for some leaders, is still unresolved. However, some important compromises have been suggested by both sides over the last few days and it is quite possible that both issues will be resolved in the next few days and an agreement concluded by or soon after Christmas.

The fishing issue concerns the extent of access by EU fishermen and women to British territorial waters, the length of any transition period from the current situation under the Common Fisheries Policy, which provides access for EU fishers to those waters and establishes multi-annual quotas for catches, and the British and EU shares of the catch in British waters once the CFP is no longer in effect. President Emmanuel Macron has led a group of EU coastal states that includes, most notably, Belgium, the Netherlands and Denmark, that are insisting on continued access to British waters for a long transition period after 2020, continued access to the 6-12 nautical mile zone of British coastal waters, and the right to retain roughly 60-80 percent of the current annual catch by EU fishermen and women in British waters. The UK insists on a much shorter transition period, permanent exclusion of EU fishermen and women from the 6-12 nautical mile UK coastal zone, and “repatriation” of a substantial portion of the EU’s total catch in terms of value. Yesterday, the UK reportedly put forward a proposal that only 35 percent of the current EU catch be “repatriated,” a substantial drop from the 60 percent it had previously demanded and the 80 percent it insisted upon at the outset of the negotiation and quite close to the 25 percent the EU has proposed after initially proposing a reduction of only 18 to 20 percent. Likewise, the UK has stretched out its proposal for the length of the transition period from three to five years while the EU has accepted a shorter transition period—e.g. six years—compared with the eight years it initially demanded. And both sides have agreed on an arbitration process to resolve subsequent disagreements about the shares of catches. It’s not clear the fishing “hardliners” in the EU—most notably, France but also Belgium and Denmark—will accept the EU compromises, let alone any additional ones. But taken together, the recent compromises suggest the EU and UK may find a way to meet in the middle in regard to the fishing issue. And if they do, there’ll be a deal.

As important as an agreement between the UK and the EU on their future relationship would be, attention in both the UK and the EU, and, indeed, the world at large over the last several days has focused not on the EU-UK negotiation but, quite understandably, on another issue—Covid. On Saturday, Johnson announced that UK scientists had discovered that a new variant of the virus—one that may be up to 70 percent more transmissible than the original virus—was spreading rapidly in London, the South East and the East of England. As a result, new restrictions, labeled tier 4 and broadly equivalent to the national restrictions introduced in England during the November lockdown, were introduced in those areas Sunday. Later that day, France announced that its border would be closed to all freight and passenger travel from the UK from midnight Sunday for at least 48 hours. Roughly 10,000 trucks a day travel by ferry between Dover and Calais and the closure of the French border resulted in miles-long backups of trucks on the M20 going to Dover. Also on Sunday, more than 40 countries prohibited the arrival of flights from the UK. The only good news—although it was very good news—coming out of Europe over the last few days came yesterday, when the EU’s European Medicines Agency recommended approval of the Pfizer/BioNTech Covid-19 vaccine and the Commission approved its use the same day, with vaccinations scheduled to begin on December 27.

Meanwhile, the EU-UK negotiation continues. The teams, led by Barnier and Lord David Frost, met yesterday and again today, British Prime Minister Boris Johnson and European Commission President Ursula von der Leyen spoke again by phone last night about the fisheries issue and are understood to be staying in touch with each other, and this afternoon Barnier met again, as he had last week, with the EU ambassadors and later with members of the European Parliament. Going into the meetings, he told reporters, “We are really in a crucial moment. We are giving it a final push.” And he told those with whom he met there could be an agreement by Christmas. Will his “final push” be enough? We’ll soon find out.