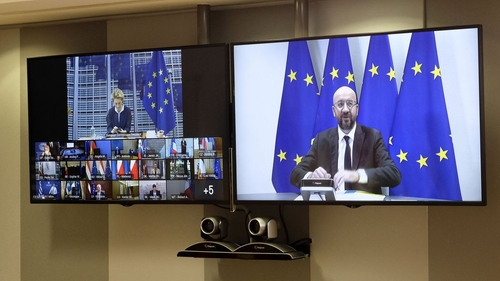 On April 23, the European Council, the heads of state or government of the 27 member states of the European Union, approved a €540 billion package of assistance for workers, firms and euro area member states that the Eurogroup, the finance ministers of the euro area, had approved two weeks earlier. The leaders also agreed to work toward establishing a recovery fund that would target the sectors and areas most affected by the pandemic and tasked the Commission with analyzing what is needed, proposing a recovery plan commensurate with the challenge, and clarifying its link with the EU’s 2021-27 Multiannual Financial Framework. On May 27, Commission President Ursula von der Leyen presented the Commission’s plan to the European Parliament and today the European Council met to discuss it.

The plan has two components—a new €750 billion recovery instrument, called Next Generation EU, that would be embedded within a revamped MFF that, in addition to the Next Generation EU funds, would include €1.1 trillion of spending over the seven years. The money for Next Generation EU would be raised by temporarily increasing the EU’s “own resources” ceiling to 2 percent of EU Gross National Income, which would allow the Commission to borrow €750 billion on the financial markets. The borrowed funds would be repaid through future EU budgets over 30 years beginning in 2028. In order to service the debt, the Commission proposed creating several new “own resources”—i.e., additional sources of revenue—including one based on the emissions trading scheme, a carbon border adjustment mechanism, a tax based on the operation of large companies, a new digital tax, and a tax on non-recycled plastics.

€500 billion of the €750 billion would be disbursed as grants and €250 billion as loans through three “pillars.” The first would involve support to member states for investment and reforms to address the crisis and would include, in particular, a new Recovery and Resilience Facility with a budget of €560 billion that would provide grants or loans to member states to implement investments and reforms essential for a sustainable recovery. It would also include a new initiative that would provide an additional €55 billion for cohesion support and additional funding for several programs supporting a “green transition.” The second pillar is designed to provide incentives for private investment and would include €31 billion to support a new Solvency Support Instrument, a doubling of the capacity of InvestEU, the EU’s flagship investment program, and €15 billion to support a new Strategic Investment Facility within InvestEU. The third pillar would include €9 billion for a new EU health program to invest in prevention, crisis preparedness and procurement of vital medicines and equipment as well as a substantial increase in support for the EU’s Neighborhood, Development and International Cooperation Instrument and its pre-accession partners in the Western Balkans.

The financial and fiscal stage for the Commission’s plan was set by a resolution of the European Parliament on May 15 that supported creation of a €2 trillion Recovery and Transformation Fund financed through the issuance of long-dated recovery bonds and disbursed through loans and, mostly, grants and then, three days later, by a video press conference in which French President Emmanuel Macron and German Chancellor Angela Merkel called for creation of a €500 billion recovery fund that would be financed by the Commission borrowing on the financial markets and disbursing the funds through its budget as grants to the sectors, regions and countries hardest hit by the crisis. For Merkel, who in April had said that grants “do not belong in the category of what I can agree,” the proposal constituted a remarkable change in position. Some attributed it to increased uncertainty, in the wake of the German Constitutional Court’s decision two weeks earlier that the government and the Bundesbank had failed to obtain an adequate explanation from the European Central Bank of the presumed economic effects of its 2015 quantitative easing program, whether the euro area would be able to rely upon the ECB’s continued purchase of public and private sector debt under its new €750 billion Pandemic Emergency Purchase Programme (recently increased to €1.35 trillion). But at least as important was her realization that, without a sufficiently robust recovery effort, the EU’s Single Market, and perhaps even the EU itself, might not survive. As she said yesterday in the Bundestag, “the pandemic has revealed how fragile the European project still is.” Warning of the danger of a “permanent deep rift in Europe,” she said, “We must not allow the economic prospects of the EU member states to drift apart…Europe needs us as we need Europe….Cohesion and solidarity have never been as important as they are today.”

Predictably, the Macron-Merkel proposal prompted an alternative proposal from the so-called “frugal four”—Austria, the Netherlands, Denmark and Sweden—that rejected any instruments or measures leading to debt mutualization and any significant increase in the EU budget and proposed a “loans for loans” approach in which the borrowed funds would be distributed as short-term loans, on favorable terms but on the basis of a “thorough needs assessment” and accompanied by “strong commitments” by the recipients to “reforms and the fiscal framework,” to support activities that would contribute to the recovery such as research and innovation, enhanced resilience in the health sector, and activities supporting the “green transition” that underpins the EU’s climate, growth and digital agendas. The financial scope for the fund, they said, should be provided through savings in the MFF by reprioritizing in areas that are less likely to contribute to the recovery. And there should be an explicit sunset clause after two years.

In a quite extraordinary move designed to not only make their position in regard to the Commission plan known in advance of today’s meeting but to do so in a way that would make it politically difficult for them to subsequently change their position, on Tuesday the leaders of the “frugal four”—Chancellor Sebastian Kurz of Austria and Prime Ministers Mark Rutte of the Netherlands, Mette Frederiksen of Denmark, and Stefan Löfven of Sweden—wrote an oped in the Financial Times setting out their position. They said that, while they fully support creation of a time-limited emergency recovery fund, “important principles ought not to be thrown overboard: How could it suddenly be responsible to spend $500 billion of borrowed money and send the bill into the future?” Taking issue with the Commission’s proposal to disburse a substantial portion of the funds as grants, they said, “when we borrow money together in the EU, the fundamentally sound way to use that money is to convert it into loans for those who really need them, on the best possible terms.” And taking issue with the Commission’s proposal that the funds be distributed on the basis of the size of the member state’s Gross Domestic Product, its GDP per capita, and its rate of unemployment in 2015-19, they said the assistance should be available for the sectors and regions hardest hit by the pandemic: There should be “specific and crisis-related criteria to base decisions on. Conditions on the ground should decide where the money goes. Taking decisions now based on pre-crisis statistics simply makes no sense.” They said the fund should be open only until the end of 2022, should not be bigger than can usefully be absorbed by member states during the present emergency, and should not be “mixed up with other challenges and priorities” addressed in the long-term budget. And, they said, in setting new priorities in the MFF after the pandemic the EU must reprioritize: “Everything cannot be equally important.” Lastly, and living up to their name, they noted that the crisis strains all of the national budgets, so there must be a “realistic level of spending. Most importantly, money should be used carefully and only where we know it will make a real difference.”

Today’s meeting of the EU 27 leaders plus European Council President Charles Michel and von der Leyen, conducted via video conference, lasted four hours, during which the leaders discussed in considerable detail the strengths and weaknesses of the Commission’s proposal. Speaking after the meeting, von der Leyen said the discussion was “very positive. Leaders unanimously agreed that the severity of this crisis justifies an ambitious common response.” She also noted that “many leaders stressed that we must do everything in our power to reach an agreement soon in the European Council before the summer break. There is a real understanding that the effectiveness of the response depends on this, too.” However, she noted that the discussions “also showed differences of opinion on various issues, for example on the overall size of Next Generation EU, on the balance between grants and loans, on the allocation key, and on own new resources and rebates.”

Michel, for his part, noted that today’s meeting was the first occasion in which the leaders discussed among themselves the Commission’s proposal. He said he observed that “on different points there is an emerging consensus, which is very positive. But at the same time, we don’t underestimate the difficulties. And on different topics we observe that it is necessary to continue to discuss.” Looking forward, he said, “Now we shift to another phase, we will negotiate….I am totally committed to start immediately real negotiations with the Member States. We intend to have a physical summit [i.e., in person rather than by video conference] around the middle of July in Brussels. We will have the occasion to focus on some concrete proposals. Before this summit, I will put on the table some concrete proposals in order to try to take a decision. We are aware that it is essential to take a decision as soon as possible.”

David R. Cameron is a professor of political science and the director of the European Union Studies Program.