The Expensive Club That Could Stop Global Warming 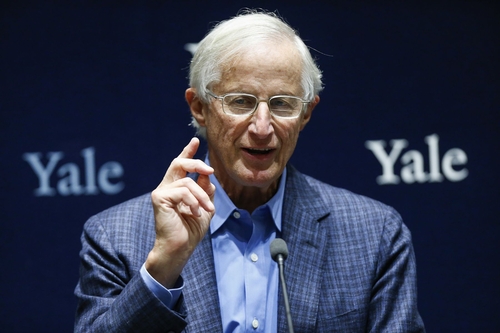 William Nordhaus calls for a Climate Club of nations that agree to cut emissions—and sanction non-members as reported in Bloomberg Businessweek on January 29.

Ever heard of the Climate Club? It has extremely expensive dues, but you might find it worthwhile to pay them, because the cost of not joining is even higher. Nations that belong to the club welcome all comers (the carrot) and punish those that don’t join (the stick). The Climate Club has one mission: to save the planet by driving emissions of greenhouse gases to zero.

If you haven’t heard of the Climate Club yet, don’t feel bad—it does not, as of now, exist. It’s the hobbyhorse of William Nordhaus, the Yale University economist who won a Nobel prize in 2018  “for integrating climate change into long-run macroeconomic analysis.”

Nordhaus pitched the Climate Club on Jan. 28 in a video seminar hosted by Princeton University economist Markus Brunnermeier. It’s a club he has advocated at least since 2015, when he wrote an article about it for the American Economic Review, a leading scholarly journal.

The Climate Club is intended to solve a deep problem in climate change: free-riding. That’s where nations try to get a free ride off other nations’ hard work in reducing emissions, knowing that reductions in one place benefit people all over the planet. With each nation hoping the others will bear the burden of emissions cuts, the planet keeps heating up. “International climate policy is at a dead end,” Nordhaus told Brunnermeier’s audience.

The solution, Nordhaus says, is for willing nations to take collective action and put economic pressure on others to join them. First, he says, they should impose a carbon tax within their borders of perhaps $50 a ton, which would discourage emissions of carbon dioxide and create incentives for investment in clean technologies. Second, any nation that doesn’t make the commitment and live up to it should be subject to a 3% penalty tariff on products that it sells to club members, he says. The tariff wouldn’t be much of an inducement to join if only a few small countries were in the club, but would become more and more effective as more countries joined, he says.

Nordhaus says the success in rapidly developing vaccines against Covid-19 has convinced him that a crash program of investment in energy technologies could have big and quick payoffs. “My thinking here has evolved a lot in 12 months,” he told the Princeton audience. “Why can’t we think of turning the kind of energy that we had for vaccines into climate, green technologies, low-carbon technologies?”