Fixing a broken global order: Is it too late? 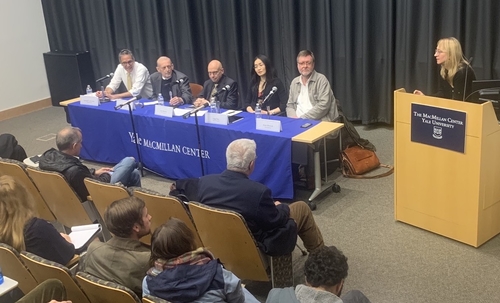 On November 7, esteemed panelists in a packed Henry R. Luce Hall this past Thursday were tasked with answering two monumental questions: can we fix the broken global order, and if so, how?

Panelists, representing diverse schools of thought from economics and history to political science, presented their ideas, and then the floor was opened for questions. Throughout the conversation, there was a distinct undercurrent of uncertainty about the present state of global affairs and concern for the future. The assembly discussed topics including overpopulation, international institutions, popular empowerment, and domestic inequality, but above all the rise of China was on everyone’s mind. (view discussion)

Many of the panelists questioned the premise of the discussion: is the global order broken or simply shifting to a state of affairs we find unfamiliar and uncomfortable? If this is indeed the case and the solution isn’t “fixing,” how should countries, and crucially the United States, reorient themselves to address future challenges?

Kennedy proposed reuniting, diversifying, and strengthening international institutions. He said that the UN, World Bank, and IMF have drifted apart and that they need to reevaluate how they coordinate with each other. The Security Council especially needed to be reworked and enhanced by the inclusion of permanent members from the global south like India, South Africa, and Brazil.

“If we don’t bring them into international relations, it is a busted thing,” he said.

Furthermore, the five great powers on the council need to be persuaded to use their veto power only in extraordinary circumstances directly related to matters of national security, although Kennedy conceded that persuading Russia and China would be no easy task. In summary, international organizations need far greater authority, respect, and power, but “what we need above all is political leadership.”

Kortum took a different tack. He quoted Nobel Prize winner Paul Romer in saying “a crisis is a terrible thing to waste.” Are things torn apart in a way we can use to make them better? Kortum proposed that now is the time to push for a more coherent, climate change policy. He discussed the idea of creating a climate club in which nations agree on a mutual, climate tax that has repercussions for non-members. Usually such a tax would have destabilizing reverberations in international trade, but “our president has already opened a can of worms” on that front.

In a similar vein, Westad said that the question of whether the global order can be fixed “depends [on] if Donald Trump is elected as president next year. If that happens, the international institution world order that we’re talking about is probably not going to happen in our lifetime.” For Americans at least, “the key question about what kind of world we’re going to live in in the future can be answered here.”

Westad saw the change in the global order as a power shift “for good and natural reasons” away from the American unipolarity toward multipolarity. He said, “Power shifts may be good or bad. The problem at the moment is the speed with which it’s happening under the current administration.” When power shifts are slow, there is a chance for adjustments to be made, but Trump has made America’s allies much more insecure.

Shapiro believed the key to helping international relations is focusing directly on domestic security. He said there has been a collapse of confidence in international organizations and the liberal economic order, and a key part of this collapse is elite complacency about insecurity within nations. We need to address unemployment, wage stagnation, economic inequality, and the loss of jobs to technological advancement. These issues were partially the focus of President Trump’s 2016 election campaign, but “Trump is offering snake oil,” Shapiro said. “He doesn’t have a strategy to get jobs back to America.”

There is no “silver bullet” for these problems, but these are the issues that need to be prioritized in order to address “the populist politics that are undermining the global order.”

Tsu addressed the topic that seemed to loom most heavily over the conversation: the rise of China and Chinese-American relations in the future. Is it a broken world order or a world order changing hands?

Tsu cautioned against seeing China as another Soviet Union. China has been “an astute student of the West” and has absorbed information from Singapore, Japan, and the U.S.

“China has a long game that is difficult for us to think about here,” she said. Whereas we change leadership or parties every four years, theirs is constant: “there’s a lot of time from their perspective to do what they need to do” such as build infrastructure and expand their reach all over the world.

“When we think about world order, a lot of it depends on how the western world responds,” said Tsu. She noted that thinking about the situation as a “faceoff” gives the rest of the world, like countries in Africa, South East Asia, and Latin America, opportunity, and “they should be thinking about how to best game the situation.”

The conversation centered on a perceived loss of American power and a dissolution of the liberal world order in the face of China’s rise and domestic challenges including inequality. At the end of the discussion, though, the panelists considered for whom are we trying to fix the world? While inequality in America has grown, global inequality has decreased and people all over the world are being pulled out of poverty. When we consider the state of affairs, a world order having less economic inequality is not a bad thing.