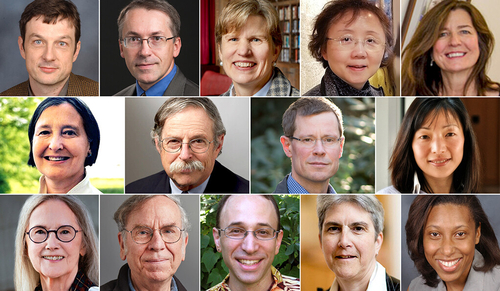 Fourteen Yale faculty members who work across a range of disciplines were among the 252 accomplished individuals elected to the American Academy of Arts & Sciences last week.

Those elected are “extraordinary people who help solve the world’s most urgent challenges, create meaning through art, and contribute to the common good,” said the academy in announcing the new members, who include artists, scholars, scientists, and leaders in the public, nonprofit, and private sectors.

“We are honoring the excellence of these individuals, celebrating what they have achieved so far, and imagining what they will continue to accomplish,” said David Oxtoby, president of the American Academy of Arts & Sciences. “This past year has been replete with evidence of how things can get worse; this is an opportunity to illuminate the importance of art, ideas, knowledge, and leadership that can make a better world.”

The academy was founded in 1780 by John Adams, John Hancock, and others who believed the new republic should honor exceptionally accomplished individuals and engage them in advancing the public good.

The new members from Yale are:

Dirk Bergemann, the Douglass and Marion Campbell Professor of Economics and professor of computer science, whose research is focused on game theory, contract theory, venture capital, and market design. He has made important contributions to the theory of mechanism design and has pioneered work on consumer behavior and dynamic pricing structures.

Nancy Brown, the Jean and David W. Wallace Dean of the Yale School of Medicine and C.N.H. Long Professor of Internal Medicine, who is committed to medical education and mentorship.

Her own research has defined the molecular mechanisms through which commonly prescribed blood pressure and diabetes drugs affect the risk of cardiovascular and kidney disease, and in her clinical practice, she has treated patients with resistant and secondary forms of hypertension.

BJ Casey, professor of psychology, who is considered a world leader in human neuroimaging and its use in typical and atypical development. She uses brain imaging to examine developmental transitions across the life span, especially during adolescence. She heads the Fundamentals of Adolescent Brain Lab, and is a member of the Justice Collaboratory at the Yale Law School and the Interdepartmental Neuroscience Program.

Valerie Hansen, the Stanley Woodward Professor of History, whose scholarly expertise is on China before 1600, Chinese religious and legal history, and the history of the Silk Road. She most recently authored “The Year 1000: When Explorers Connected the World — and Globalization Began.”

Arthur L. Horwich, Sterling Professor of Genetics and professor of pediatrics, a pioneer in the field of molecular chaperones and their role in protein folding in the cell and in neurodegeneration. His discoveries have advanced an understanding of the relevance of protein misfolding in diseases such as Alzheimer’s.

Gregory Huber, the Forst Family Professor of Political Science and chair of the political science department, who studies American politics and political economy. He is interested in understanding how interactions among the mass public and elites, political institutions, and policies explain important outcomes.

Akiko Iwasaki, the Waldemar Von Zedtwitz Professor Immunobiology and Molecular, Cellular, and Developmental Biology, and professor of epidemiology (infectious diseases), whose research focuses on the mechanisms of immune defense against viruses at the mucosal surfaces. Most recently, she has advanced understanding of SARS-CoV-2 and virus mutations.

Marcia K. Johnson, Sterling Professor Emeritus of Psychology, whose work has focused on memory and cognition, especially how complex memories are created, memory disorders, and the relation between emotion and cognition. She directs the Memory and Cognition Lab at Yale, which also studies cognition changes associated with aging.

Frederick J. Sigworth, professor of cellular and molecular physiology and biomedical engineering and of molecular biophysics and biochemistry, whose research centers on the structure and function of ion channels, which are central to many physiological processes. His laboratory is developing new computational and experimental methods for imaging membrane proteins in membranes.

Daniel A. Spielman, Sterling Professor of Computer Science and professor of statistics and data science and of mathematics, whose broad research interests include the development of fast algorithms for large computational problems often found in machine learning, scientific computing, and optimization. He was awarded a MacArthur Fellowship for this work and most recently won the Held Prize for helping solve a theoretical problem that mathematicians had been working on for decades.

Kathryn Tanner, the Frederick Marquand Professor of Systematic Theology, whose research relates the history of Christian thought to contemporary issues of theological concern using social, cultural, and feminist theory. One of her contributions was to illuminate the role that Christian faith and practice can have on the global economic system.

Ebonya L. Washington, the Samuel C. Park Jr. Professor of Economics, who specializes in public finance and political economy with research interests in the interplay of race, gender, and political representation. She also studies behavioral motivations and consequences of political participation and the processes through which low-income Americans meet their financial needs.