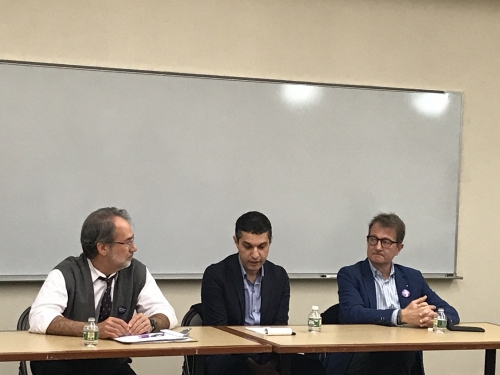 The third installment of the Hellenic Studies Department’s dive into the Greek Seas through the lens of film was on the theme of the Mediterranean as refuge. The two films screened highlighted the unique burden which Greece is shouldering within the Syrian refugee crisis. They all featured “both tragedy and triumph” according to Gregory Pappas, executive producer of one of the films screened, Border Souls, who was joined on the discussion panel by Kaveh Khoshnood of the Yale School of Public Health and Chris George, the Executive Director of Integrated Refugee and Immigrant Services (IRIS). The event was cosponsored by the Hellenic Studies Program and the Program on Refugees, Forced Displacement, and Humanitarian Responses at the MacMillan Center. The Greek Seas series is organized by Tassos Kyriakides, Yale School of Public Health, and Charlene Caprio, Yale Alumna (M.A. 2001) and environmental advocate.

The first film, 4.1 Miles by Daphne Matziaraki, showcased an unflinching look at the arrival of refugees onto the Greek island of Lesbos. Outfitted with inadequate supplies, they frequently face danger during their 4.1 mile maritime journey from the coast of Turkey to Lesbos. Masses of people are crammed onto small blow up boats, many of them children, with insufficient lifejackets. The Greek coast guard are their saviors, though they too suffer from deficient resources. 4.1 Miles tells its story through the lens of one such Greek coast guard agent, in his ongoing attempts to save the masses escaping their homes and prevent their drowning. The film’s climax is one such rescue attempt, in which people drown, children lose their parents, and infants must be resuscitated. Where 4.1 Miles really shines is through its demonstration of the harrowing reality of the Mediterranean, forcing its viewers to recognize, as Kaveh Khoshnood said, “Behind those data and those statistics is a lot of human suffering.”

The second film, Border Souls, focuses instead on life after the crossing and what happens to those who make it to “refuge.” It explores the refugee camp of Idomeni, a small village on the border of Greece and FYROM, where 15,000 refugees are stuck, situated in tents surrounded by barbed wire fences, covered in mud. These people would like to move on to Europe, however, due to recent EU policies, it is illegal for them to cross the border. However, Border Souls is not a story of suffering. Rather, it is a film best characterized by a line delivered by a humble Greek volunteer, “Some people closed their borders, other people opened their hearts.” Border Souls tells the story of a small monastery and its surrounding community’s efforts to provide relief for the Idomeni refugees, from food distribution to soccer matches. Chris George remarked that this was an expression of Greek “radical hospitality,” and certainly this film, as well as the actions of the coast guard in 4.1 Miles, stood as a testament to the incredible humanity many in Greece have exhibited in receiving the mass influxes of refugees.

Despite the perilous journey and the uncertain future, the Greek seas, as well as the Greek people, have provided some kind of refuge. Refuge is just one of the many roles the Greek seas have taken on, both past and present from a place of exploration, to one of journey, to one of refuge, to one of protection.