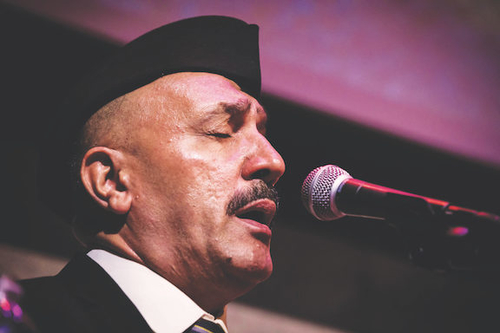 A row of musicians with strings and percussion — including instruments like a joza, santoor, doumbek, riq and naqqarah — play a steady backdrop of notes and rhythms. A vocalist then joins them, singing partially improvised melodies of the Iraqi maqam tradition — a system of melodic improvisation which originated in Baghdad 400 years ago.

On Saturday, Jan. 18 at 4:30 p.m., Hamid Al-Saadi and Safaafir will perform the Iraqi maqam in a concert co-sponsored by the Institute of Sacred Music, South Asian Studies Council at Yale and the Yale Council on Middle East Studies. Al-Saadi is the group’s vocalist. Safaafir — an instrumental ensemble consisting of Amir ElSaffar, Dena ElSaffar and Tim Moore — is the only United States-based group dedicated to performing the Iraqi maqam. The group’s name means “coppersmiths” in Arabic.

“Al-Saadi is one of the few vocalists who is keeping the maqam alive today, at a time when so many elements of this profound tradition are in danger of extinction,” Amir ElSaffar said.

Al-Saadi has studied, practiced and performed the maqam, a threatened art form, since childhood. He lives in Baghdad, but is in the United States this year under an Artist Protection Fund Fellowship sponsored by the Institute of International Education. The fellowship provides a safe place for accomplished artists who face threats to their lives or artistic practices in their home countries to share their art.

“One of the main aims of having performances like this is to increase exchange across what we see as our political or cultural borders,” said Eben Graves, the program manager of the ISM. “We see music as one way to keep the exchange and discussion going and to create bridges, which is an important thing to keep in mind when there’s a lot of political upheaval.”

In addition to holding teaching positions at Rutgers University and Sarah Lawrence College, Al-Saadi has performed at the Lincoln Center, the Kennedy Center, the Metropolitan Museum of Art and the Smithsonian Museum.

Sarab Al Ani, a senior lecturer in Arabic at Yale, noted that Iraqi maqam have a long history in the musical traditions of the region.

“The themes and topics that they tackle are always related to what’s happening in people’s daily lives,” Al Ani said. “Sometimes it’s romantic, and sometimes it indirectly criticizes society and politics, all in a very clever and artistic way.”

Al Ani explained that the main difference between Eastern and Western music lies in the pitch space between the notes of the scales. In the Western art tradition, a scale contains 12 equidistant “steps.” These steps comprise the Western “octave.” In Eastern music like the Iraqi maqam, the spacing can change — this is how maqam artists derived the 56 different modes, or scales.

Performances in the Iraqi maqam tradition involve a lead vocalist — such as Al-Saadi — and a small ensemble — such as Safaafir. Each melody in a maqam composition has six components: the main theme, secondary melodies, a high-register climax and two cadences bridged by a descending passage. The instruments play in a steady rhythm while the reciter sings freely around them.

“The unique melodic organization becomes a vehicle for the poetry,” Graves said. “It’s a different way of organizing a performance in terms of its pitch and rhythm.”

The vocalist chooses the poetry from two main genres: qasida in Classical Arabic and zuheiri in Iraqi dialect. According to Amir ElSaffar, a singer must memorize large repositories of poetry to draw from in the moment of performance. This requires several years of intense study in apprenticeships with elder reciters.

“It will bring feelings of nostalgia and longing for that type of heritage art,” Al Ani said.

This year’s tour is Al-Saadi’s second series of performances in the United States.

Written by Phoebe Liu for the Yale Daily News.