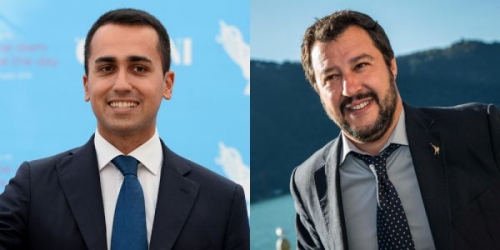 On Sunday, Europe breathed a collective sigh of relief when the German Social Democratic Party announced its members had approved its coalition agreement with Angela Merkel’s Christian Democratic Union and its Bavarian sister party, the Christian Social Union; there would – finally, more than five months after the September election – be a new government in Germany.

But only hours later, as the results of the Italian election became known, the earlier relief gave way to anxiety – both about the future of Italy, possibly governed either by political novices or xenophobic euroskeptics or both, and the ability of the European Union, if and when a new government is in office, to address the multitude of challenges it faces in reforming the rules and procedures of the euro area, dealing with the continuing migration and resettlement of refugees from North Africa and the Middle East, reversing the erosion of democratic rights and liberties in several member states in central and eastern Europe, and the larger economic and geopolitical challenges emanating from Russia, where Vladimir Putin will be elected on Mar. 18 to his fourth term as president, the United States, where Donald Trump threatens, and appears to welcome, a new trade war with the EU, and China, where President Xi Jinping will soon have the luxury of staying in office as long as he wishes.

One of the more notable features of the election, other than the low (for Italy) turnout of 72.9 per cent – the lowest since mandatory voting ended in 1993, was the unwieldy ballot, roughly two feet by two feet, which the voter had to unfold, mark with lines, and then fold up into a small packet. But certainly the most notable, and most consequential, feature was the distribution of support among the four leading parties and groups – in particular, the gains for the Five Star Movement (M5S) and the Northern League, which, in its search for votes throughout the country, campaigned simply as the Lega, and the losses of Silvio Berlusconi’s conservative Forza Italia and the center-left Democratic Party headed by former Prime Minister Matteo Renzi.

Five Star, founded in 2009 by Beppe Grillo, a comedian and blogger, emerged from Sunday’s election as the largest single party (or movement – it doesn’t consider itself a party) by a comfortable margin. In the vote for the Chamber, it won 32.7 per cent, a gain of more than 7 percentage points compared with its vote in 2013 and 14 percentage points more than the next largest party, the Democratic Party. It won 93 seats in single-member districts, 133 seats through the PR distribution, and one seat in the overseas constituencies – a total of 227 compared with the 108 it won in 2013.

A populist, anti-establishment movement, the five stars that gave the movement its name referred to the five issues with which it was initially concerned – public water, sustainable transportation, sustainable development, the environment, and internet access. Not easily located on a left-right continuum, it advocates e-democracy – it selected its current leader, 31-year-old Luigi Di Maio, by an online primary last year – and political transparency. But it is also concerned with the excesses of consumption and a capitalist economy, advocates “degrowth,” and is concerned about poverty, inequality, the high rate of unemployment – currently over 10 per cent – and, in particular, youth unemployment. At the same time, it is broadly euroskeptic and, until recently, called for a referendum on leaving the euro area. During the campaign, it said it would call for a referendum if the fiscal and economic rules governing the euro area are not amended by the EU. Given the mélange of issues, it has attracted widespread support among the young, those living in the south, those in the lower strata of the income distribution, and those believing Italy’s afflictions can be blamed largely, if not entirely, on the EU and the rules of the euro area.

Sunday’s other big winner was the Northern League, which, as noted above, ran in much of the country, for obvious reasons, simply as the Lega. Headed since 2013 by Matteo Salvini, a member of the European Parliament, the Lega, which was founded in 1991 from regional movements supporting federalism and greater regional autonomy in Piedmont, Lombardy and elsewhere in northern Italy, has moved rightward under Salvini and staked out a position as a nationalist, xenophobic and euroskeptic party, one that is especially hostile to the more than 630,000 immigrants that have arrived in recent years and is strongly opposed to the EU’s policies both with regard to immigration and to the operation of the euro area. (Salvini was, for example, often seen in the European Parliament and elsewhere wearing a “basta euro” (no more euro) t-shirt.)

Running in a coalition with Berlusconi’s Forza Italia and the far-right Brothers of Italy, the Lega won 17.4 per cent of the PR vote, a gain of some 13 percentage points compared with its 2013 vote. No less important, the Lega outpolled Forza Italia, which won 14 per cent, compared to 21.6 per cent in 2013 for its predecessor party, People of Liberty. Brothers of Italy, the third party in the coalition, won 4.4 per cent compared with 2 per cent in 2013. Clearly, the big winner on the right was the Lega and the big losers on the right were Forza Italia and Berlusconi. That was reflected in the total seats won by each of the three parties; counting the seats won in the Chamber in single-member districts as well as through the PR distribution and the overseas constituencies, the Lega won 126, Forza Italia 104, and Brothers of Italy 33 for a total of 265 seats. Salvini and the Lega entered the election as the junior partners of Berlusconi and Forza Italia; after the election, it is clear that Salvini and the Lega have displaced both as the dominant figure and party on the right.

The other big loser in Sunday’s election was, of course, the Democratic Party. It won 18.7 per cent of the PR vote, compared with 25.4 per cent in 2013, a loss of nearly 7 percentage points. Together with several small parties, none of which surpassed the 3 per cent threshold, it won 28 single-member seats, 88 seats through PR and six of the 12 voted by the overseas constituencies, giving it a total of 122 seats. That compares with the 292 seats it won and the additional 48 seats its coalition partners won – a total of 340 seats – in 2013. There can be no doubt that, if Five Star and the Lega were both big winners on Sunday, the Democratic Party and its small allies, with a loss of more than 200 seats in the Chamber, was the biggest loser in the election. Not surprisingly, on Monday Renzi announced he would step down as leader once a new government was in place.

On Mar. 23 the new parliament will convene and each house will elect a speaker, after which President Sergio Mattarella will begin consultations with the parties that either produce, in perhaps a month or two, a new government – the average duration between an election and the formation of a government over the past two decades has been close to two months – or, in the worst case scenario, dissolution of the parliament and a new election. The problem, of course, is that the distribution of seats among the major contenders – the Five Star Movement, the Democratic Party, and the Forza Italia-Lega-Brothers coalition – and the programmatic differences among them make the formation of a government commanding a majority in the Chamber of Deputies difficult if not impossible. Given the losses in seats suffered by both the Democratic Party and Forza Italia, the formation of a Germany-styled “grand coalition” between the two, widely discussed before the election, would fall well short of a majority. It seems highly unlikely either the Five Star Movement or the Democratic Party would agree to form a government with the Forza Italia-Lega-Brothers coalition. It may well be the case that the only possible government would be a coalition between the Five Star Movement and the Democratic Party, although there are many within the latter, including Matteo Renzi, who would object strenuously to such a coalition. But it is also quite possible that, after a protracted negotiation, President Mattarella will have no alternative but to dissolve the parliament and call another election.

No wonder Europe is anxious.

Written by David R. Cameron, a professor of political science and the director of the MacMillan Center’s Program in European Union Studies.