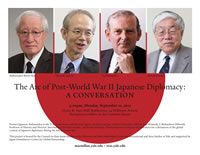 The Whitney and Betty MacMillan Center for International and Area Studies at Yale with support from the Japan Foundation’s Center for Global Partnership has launched a planned five-year effort titled, “Japan at the Crossroads: Yale Project on Japan’s Politics and Diplomacy.”

“We are grateful to the Japan Foundation Center for Global Partnership for this generous gift,” said Ian Shapiro, Henry R. Luce Director of the MacMillan Center, and Sterling Professor of Political Science. “The foreign policy and domestic issues faced by Japan require greater awareness and reflection by American scholars and thought leaders. Through this project, we seek to raise the level of interest and understanding in Japan and the exciting promise of stronger engagement between Japan and the U.S.”

The goal of the “Yale Project on Japan’s Politics and Diplomacy” is to deepen and broaden the understanding of Japan and its global challenges among Yale students, scholars, faculty, and visitors on campus. The project will support a post-doctoral fellow or visiting professor; a visiting speakers series; an annual international conference; and research fellowships for Yale faculty, graduate students, and undergraduate students to support research on contemporary Japan. The activities of the project will be disseminated through print publications and a website at http://japan-crossroads.yale.edu. Frances McCall Rosenbluth, Damon Wells Professor of Political Science, leads the project.

On September 21 the project will host its first major event titled, “The Arc of Post-World War II Japanese Diplomacy: A Conversation.” Professors Paul Kennedy, J. Richardson Dilworth Professor of History and Director, International Security Studies, and Koichi Hamada, Tuntex Emeritus Professor of Economics, will join former Japanese Ambassador to the U.S. Ryozo Kato and Naoyuki Agawa, Professor at Keio University, for a discussion of the global context of Japanese diplomacy during the last seven decades. The event will be held in the auditorium of Henry R. Luce Hall, 34 Hillhouse Avenue, at 4:00 p.m. It is free and open to the public.

The Japan at the Crossroads project reinforces the MacMillan Center’s role as a hub of interdisciplinary research and teaching on contemporary issues of global, institutional, and human import. The MacMillan Center draws its strength by tapping the interests and combining the intellectual resources of the Yale Faculty of Arts and Sciences and Yale’s 12 professional schools.