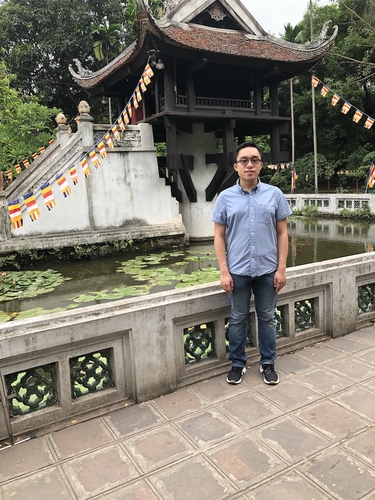 This summer I arrived in the land of my ancestors for the first time. After hearing about Vietnam for the past eighteen years, I have had the chance to experience her for myself. What better way to experience a country than through cultural immersion? Thanks to a fellowship from the Council on Southeast Asia Studies, I lived in Hanoi for eight weeks while learning Classical Chinese at the Institute of Hán-Nôm Studies. The men and women of the institute have kept this intangible cultural heirloom alive. Under the guidance of Professor Nguyễn Đình Hưng and Director Nguyễn Tuấn Cường, I received my first introduction to the linguistic theory behind Classical Chinese. I then applied that knowledge in studying the Three Character Classic (Tam Tự Kinh). Professor Hưng led me through each three character group as he explained the stroke order, radicals, and meaning(s) of each character.

At first, I didn’t know how I would do trying to learn Classical Chinese for the first time. Friends and family members have attested to its difficulty. Moreover, I never thought that I would be studying the language in the first place before this summer. Growing up, I never learned any of the modern Chinese dialects. Neither of my parents speak Chinese. So, for them, my decision to study Classical Chinese seemed out of the blue. Nonetheless, I knew that Classical Chinese has its place in Vietnamese society. Being ever the eager language learner, I began my studies. In studying the language, I see its continuing legacy not only in the Vietnamese language but also in the wider Vietnamese society as well.

In a time when political relations between China and Vietnam have not always been amicable, I went into Vietnam assuming that my study had nothing to do with politics. Interestingly, my conversations with my homestay family demonstrate a slight bias toward anything Chinese related. In a conversation with one of my hosts, he remarked how studying modern Vietnamese would have been more useful. In light of Vietnamese history, my host lived through the border conflict Vietnam had with China. At least in the area around Hanoi, I got the sense that people are still deeply suspicious of Chinese motives. This suspicion continues to influence Sino-Vietnamese diplomatic relations.

As my first time in Vietnam, this summer proved to be incredibly transformative. I have found it hard to put into words all the emotions I have felt. In spite of nearly a century of continuous conflicts, the Vietnamese have proven time and time again their resiliency. The grit of ordinary Vietnamese reminds me not only of my own family but also why I am proud to be Vietnamese American. My two-month sojourn in the lands of the Hùng kings has made me even more eager to reflect more critically on my Vietnamese American heritage. Wherever my curiosity leads me next, I am excited to see where it leads me.