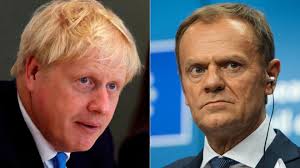 When he spoke in front of 10 Downing Street for the first time as prime minister on July 24 after returning from Buckingham Palace, Boris Johnson made it clear the UK will leave the EU on Oct. 31, with or without a deal: “We are going to fulfil the repeated promises of Parliament to the people and come out of the EU on October 31, no ifs or buts.” But he also made it clear that he hoped to leave with a deal rather than without one: “And we will do a new deal, a better deal that will maximize the opportunities of Brexit while allowing us to develop a new and exciting partnership with the rest of Europe, based on free trade and mutual support.”

For Johnson, “a new deal, a better deal” means a deal without the Irish “backstop”– the provisions in the 173-page Protocol on Ireland/Northern Ireland contained in the 599-page withdrawal agreement negotiated last year between the EU and the UK that are meant to ensure the avoidance in all future circumstances of a hard border between Northern Ireland and the Republic and that were the reason the House of Commons rejected the agreement three times earlier this year – by votes of  432 to 202 on Jan. 15, 391 to 242 on Mar. 12, and 344 to 286 on Mar. 29.

The “backstop” first appeared in the Dec. 2017 96-paragraph joint report from the EU and UK negotiators on progress during phase one of the negotiations. Paragraph 49 stated in regard to the border between Northern Ireland and the Republic: “The United Kingdom remains committed to protecting North-South cooperation and to its guarantee of avoiding a hard border. Any future arrangements must be compatible with these overarching requirements. The United Kingdom’s intention is to achieve these objectives through the overall EU-UK relationship. Should this not be possible, the United Kingdom will propose specific solutions to address the unique circumstances of the island of Ireland. In the absence of agreed solutions, the United Kingdom will maintain full alignment with those rules of the Internal Market and the Customs Union which, now or in the future, support North-South cooperation, the all-island economy and the protection of the 1998 [Good Friday or Belfast] Agreement.”

The “backstop” was elaborated in Articles 6.1 and 6.2 of the Protocol on Ireland/Northern Ireland. Article 6.1 states, “Until the future relationship [between the EU and UK] becomes applicable, a single customs territory between the Union and the United Kingdom shall be established (“the single customs territory”).” As Attorney General Geoffrey Cox noted in his legal advice to the government last November, while the UK as a whole would form a single customs territory with the EU, the arrangements would apply differently in Great Britain and Northern Ireland; the latter would remain in the EU’s Customs Union and would apply the whole of the EU’s customs acquis, and the European Commission and Court of Justice would continue to have jurisdiction over its compliance with those rules.

Article 6.2 of the Protocol states, “Legislation [in regard to customs] of the European Parliament and of the Council shall apply to and in the United Kingdom in respect of Northern Ireland.” As Cox noted, Northern Ireland would, as a result, remain in the EU’s Single Market for goods and the EU’s customs regime, would be required to apply and to comply with the relevant rules and standards of both, and the Commission and Court of Justice would continue to have jurisdiction over Northern Ireland’s fulfilment of its obligations under those rules, thereby allowing goods from Northern Ireland to enter into free circulation in the EU and allowing goods to pass between Northern Ireland and Ireland without any checks and, therefore, any hard border. Cox also noted that, while Great Britain wouldn’t be in the EU’s Single Market, it would be obliged to observe a range of EU regulations involving environmental, labor, social and competition policy in order to maintain a “level playing-field” vis-à-vis the EU. It wouldn’t be subject to the jurisdiction of the Commission or Court in regard to those obligations, but it would have to apply EU law in the field of state aid and any breach would be actionable through the Joint [EU-UK] Committee within the governance arrangements of the withdrawal agreement, and directly by the Commission as a party in the UK courts.

The conundrum for Johnson, of course, is how to get “a new deal, a better deal” – i.e., one without the “backstop” – given the EU’s adamant refusal to reopen the negotiation of the withdrawal agreement, and how to get such a deal by Oct. 31. On Monday, he wrote to European Council President Donald Tusk, with copies to Commission President Jean-Claude Juncker and the 27 other heads of state or government who, with Johnson, comprise the European Council, setting out the UK’s position in regard to the “backstop” and proposing what he believes to be a solution that would enable the UK to leave with a deal on Oct. 31.

In his four-page letter, Johnson said, “I very much hope that we will be leaving with a deal. You have my personal commitment that this Government will work with energy and determination to achieve an agreement. That is our highest priority.” After emphasizing the UK’s close ties with Ireland, its desire to find solutions to the border that work for all, and its continued commitment to the peace process and the Common Travel Area, Johnson  pointed out three shortcomings with the “backstop” – the fact that it locks the UK into a treaty that binds it in a customs union with the EU, applies large areas of Single Market legislation to Northern Ireland, and creates a substantial regulatory border between Northern Ireland and the rest of the UK. It’s also, he said, inconsistent with the UK’s desired final destination in terms of its long-term relationship with the EU – outside both the single market and the customs union. And it risks weakening the “delicate balance between both traditions” in Northern Ireland that is embodied in the Belfast (Good Friday) Agreement. For those reasons, he argued, “the backstop cannot form part of an agreed Withdrawal Agreement…the task before us is to strive to find other solutions, and I believe an agreement is possible.”

The first step, Johnson said, was to ensure there is no return to a hard border between Northern Ireland and Ireland. Toward that end, he said the UK will not put in place infrastructure, checks, or controls at the border between Northern Ireland and Ireland and “would be happy to accept a legally binding commitment to this effect.” Secondly, “flexible and creative” solutions to the unique circumstances on the island of Ireland must be found, which means “alternative ways of managing the customs and regulatory differences contingent on Brexit must be explored.” Since the UK and EU have already agreed that “alternative arrangements” can be part of the solution, he proposed that “the backstop should be replaced with a commitment to put in place such arrangements as far as possible before the end of the transition period [i.e., before Dec. 31, 2020 or, with an extension, Dec. 31, 2021 or Dec. 31, 2022] as part of the future relationship. And third, he said that, recognizing the need for a “degree of confidence” about what would happen if these arrangements were not all fully in place at the end of that period,” the UK is “ready to look constructively and flexibly at what commitments might help, consistent of course with the principles set out in this letter.”

Johnson spoke by phone with Irish Taoiseach Leo Varadkar for almost an hour Monday evening. After pointing out the obvious – that the withdrawal agreement in its current form won’t be approved by the House of Commons – Johnson said the backstop would have to be removed and an alternative solution found. Varadkar for his part reiterated once again that the agreement can’t be reopened and that a legally operable guarantee to ensure an open border and continued free trade on the island is needed. Johnson will meet with German Chancellor Angela Merkel tomorrow, with French President Francois Macron on Thursday, and no doubt will meet with both of them again, and others including Tusk and Juncker, at the G7 meeting in Biarritz this weekend. But even before those meetings, it appears his proposal won’t find much support in the EU. Tusk, meeting with Canadian Prime Minister Justin Trudeau in Montreal today, dismissed Johnson’s letter in a tweet: “The backstop is an insurance to avoid a hard border on the island of Ireland unless and until an alternative is found. Those against the backstop and not proposing realistic alternatives in fact support re-establishing a border. Even if they do not admit it.”

Johnson has been prime minister for almost a month. It took him a month to come up with a proposal that provides little more than an offer to accept a legally-binding commitment that the UK won’t introduce infrastructure, checks, or controls at the border between Northern Ireland and Ireland, a commitment to put in place unspecified “alternative arrangements” (if such exist) before the end of the transition period, and willingness to consider other commitments. Can he come up with a “realistic alternative” to the “backstop” between now and Oct. 31? One would think the fact that a no-deal Brexit would in all likelihood result in a vote of no confidence and formation of a new government while an exit with an approved withdrawal agreement might enable Johnson to remain in 10 Downing St. until the next scheduled election in 2022, and perhaps even later, would induce him to accept Donald Tusk’s implicit invitation to come up with a “realistic alternative” to the “backstop.” Will it? We’ll soon find out.