New governments in Italy & Spain, but for how long? 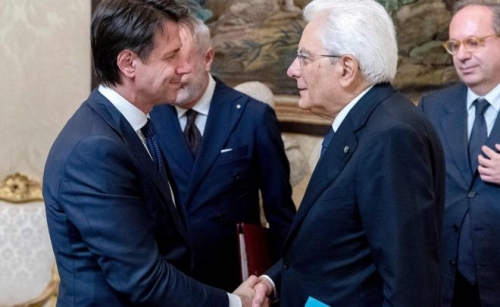 On Friday, June 1, after nearly three months of negotiation between Italy’s Five Star Movement and the Lega (formerly the Northern League) following the March 4 election, a new government headed by Giuseppe Conte took office. On the same day, after a majority voted in favor of a motion of no confidence in the minority government of Prime Minister Mariano Rajoy, the author of the motion, Pedro Sánchez, the leader of the Socialist Party (PSOE), replaced him as prime minister.

The financial markets, fearful that the stalled negotiations in Italy would lead to the appointment of a caretaker government that would call a new election that would become a referendum on its continued participation in the euro area, breathed a collective sigh of relief after a week of high anxiety. Likewise, those fearful that the recent formation of another pro-independence government in Catalonia would open a new chapter in its long-running conflict with Madrid breathed a collective sigh of relief as well. But how long the new governments will remain in power is not at all certain; both depend on partisan coalitions that may have a very short half-life.

Certainly the most important development, at least from the perspective of the financial markets and the European Union, was the decision by Luigi Di Maio, the leader of the Five Star Movement, and Matteo Salvini, the leader of Lega, to accept President Sergio Mattarella’s rejection of Paolo Savona, a long-standing and outspoken opponent of the euro, and accept, instead, Giovanni Tria as minister of the economy and finance in a government headed by Conte, a professor of law who has never run for office and is not a member of the Chamber of Deputies.

After Mattarella rejected Savona, Di Maio called for the president’s impeachment and Salvini, aware that recent polls indicated that support for the Lega had increased dramatically above the 17 percent it received in the March election, called for new elections. Mattarella asked Carlo Cottarelli, a former senior official in the International Monetary Fund, to form a caretaker “technocratic” government that would move toward new elections – a decision that had a sobering effect on both Di Maio and Salvini. Di Maio, aware that, in contrast to the post-election surge in support for the Lega, the recent polls indicated that support for Five Star had receded from the 33 percent it received in the March election, preferred to reopen the discussions with Mattarella rather than move to new elections. For Salvini, the prospect that the Lega would significantly increase its vote in a new election was offset by the prospect that the caretaker government would, for some uncertain amount of time, be in the hands of a former senior IMF official and a finance minister who, like Cottarelli, was committed to remaining in the euro area and adhering to its policies. Better, he thought, for the government to be controlled by Five Star and the Lega and with someone in charge of the finance ministry who, although less hostile to the euro than Savona and opposed to leaving the euro area, was nevertheless critical of the policies pursued in it. Di Maio and Salvini reopened the negotiations with Mattarella and quickly settled on a government headed by Conte with Tria, an economist, as minister of the economy and finance. Savona was appointed minister for European affairs but it will be Tria, not Savona, who will participate in the eurogroup which oversees the operation of the euro area. Di Maio and Salvini are deputy prime ministers, with Di Maio serving as minister of economic development, labor and social policies and Salvini serving as minister of the interior.

The new government is undoubtedly one of the oddest of political odd couples ever seen in Europe – a coalition between an internet-based, left-leaning, anti-establishment movement that, among other things, wants to provide a “citizenship income” of €780 per month for all citizens and a hard-right party that wants to introduce a two-tier flat income tax, stop new arrivals of migrants and return those who have already arrived, and leave the euro area (but only after the European Central Bank writes off the €250 billion in Italian bonds it bought in its quantitative easing program).

While Five Star and the Lega differ in their priorities and positions on some issues, both campaigned in opposition to Italy’s participation in the euro area and the overarching commitment to fiscal austerity that has accompanied that participation. Five Star called for a referendum on the euro and the Lega advocated leaving the euro – both casually ignoring the fact that leaving the euro is not an option for Italy. With €2.3 trillion of public debt, any government that left the euro and brought back the lira would very quickly find itself unable to borrow in the markets, even at exorbitantly high rates, unable to service its debt, and insolvent. After a desperate run on the banks, many of which are saddled with large amounts of non-performing loans and in precarious health, the banking system would shut down and the government would have to look abroad for help – and would find that the decision to give up the euro had foreclosed any assistance from the European Central Bank, the European Stability Mechanism or the IMF.

Perhaps slowly coming to the realization that leaving the euro is not an option, over the several months of post-election negotiations both Five Star and the Lega toned down their outspoken opposition to the euro – perhaps best exemplified by a painting crew that showed up at the Lega’s headquarters last Wednesday and whitewashed over a large slogan – “Basta Euro” (stop the euro) – that had been on an exterior wall for months and also, of course, by their acceptance of Mattarella’s veto of Savona as minister of finance. Nevertheless, the fact remains that the populist appeal of both Five Star and the Lega has, to a considerable extent, rested on their persuasive attribution of the poor performance of the Italian economy in recent years to Italy’s participation in the euro area and its acceptance of the commitment to fiscal austerity that has accompanied that participation – and their strident opposition to that participation and commitment.

Whether its participation in the euro area and commitment to fiscal austerity is in fact the cause of Italy’s poor economic performance is something that economists such as Savona and Tria (and many others) will continue to debate. But there can be little doubt that, compared with the economies of the other member states of the EU, the Italian economy has performed poorly in recent years. For example, the rate of economic growth was less than 1 percent in 2014-16, 1.5 percent last year and is estimated by the EU to be 1.5 percent this year – the lowest in the EU. The rate of unemployment was over 11 percent in 2014-17 and is expected to be 10.8 percent this year – higher than that in all the other EU member states except Spain and Greece. No less important, the rate of employment – the proportion of those aged 20-64 who are employed – is lower than that in all of the other member states except Greece. Yet despite the poor economic performance, Italy’s budget deficit is estimated to be only 1.7 percent this year, well below the stipulated (but often exceeded) limit of 3 percent. Leaving the euro isn’t an option for Italy. But it’s clear that Italy could be doing much more than it is now doing to generate growth and employment. Whether the ministries headed by Di Maio and Tria will be able to generate more growth and employment through fiscal expansion coupled with an active labor market policy remains to be seen. But that is certainly the primary challenge facing the new government.

Turning to Spain, the new government will be headed by Pedro Sánchez of the Socialist Party (PSOE), who submitted the motion of no confidence after a court convicted 29 businessmen and politicians and Rajoy’s People’s Party (PP) of a wide-ranging kickbacks-for-contracts operation that benefitted both the individuals and the party. According to parliamentary rules, Sánchez, as the author of the no-confidence motion, would automatically become prime minister if the motion were supported by a majority. The Socialists obtained only 22.6 percent of the vote in the June 2016 election and hold only 84 of the 350 seats in the Congress of Deputies, so it was by no means certain, or even likely, the motion would be approved by a majority of the deputies, even despite the fact that the court said Rajoy’s testimony was “implausible.” Nevertheless, the motion of no confidence was approved by 180 to 169 – thanks to support from what one opponent called a “Frankenstein coalition” that included, in addition to the Socialists, United We Can (Unidos Podemos), a relatively new party to the left of the Socialists; two Catalan parties that support independence, the Left Republicans (ERC) and the Catalan European Democrats (PDeCAT); and the Basque Nationalist Party (PNV) and Basque Country Unite (EH Bildu). As a result, Sánchez became prime minister, despite the fact that his party holds less than one-quarter of the seats in the Congress of Deputies.

Before Friday’s vote, Sánchez said he intends to remain in power only long enough to ensure passage of next year’s budget and enact some reforms in social, economic and educational policy, after which he will call new elections. But before he does that – and notwithstanding the fact that he supported the Rajoy government’s use of the powers granted under Article 155 of the Constitution to dismiss the Catalan government headed by Carles Puigdemont and call new elections after it declared the creation of an independent republic following the October 1, 2017 referendum—he is likely, with the support of Podemos and the four Catalan and Basque parties, to begin a dialogue with the new Catalan government headed by Quim Torra aimed at ameliorating, if not resolving, the contentious relationship between Madrid and Catalonia.

Torra is a hardline and long-time supporter of Catalan independence. Nevertheless, his recent decision to appoint four individuals to his government who have not been jailed or driven into exile in place of the four he initially appointed who are either in jail or exile because of their roles in last October’s events and who Madrid, not surprisingly, rejected, could be read by as evidence of a willingness on the part of Catalonia to open a dialogue with Madrid. Sánchez, for his part, could reciprocate by lessening, or even terminating, the ongoing effort to prosecute Puigdemont, now in exile and awaiting a decision by a German court in response to a Spanish warrant, and other Catalan officials for their involvement in the referendum and declaration. He could perhaps also begin to address Catalonia’s long-standing desire for a greater degree of fiscal autonomy, perhaps by resurrecting and updating the 2006 statute of autonomy the rejection of which by the Constitutional Court fueled the growth in support for independence over the past dozen years. It is perhaps too much to expect that a minority government that holds less than a quarter of the seats in the Congress of Deputies and will rely for passage of legislation on the “Frankenstein coalition” that removed Rajoy from the Moncloa could lessen, let alone resolve, the historic tension that exists between Madrid and Catalonia. Nevertheless, stranger things have happened; after all, look at the coalition that now governs Italy.