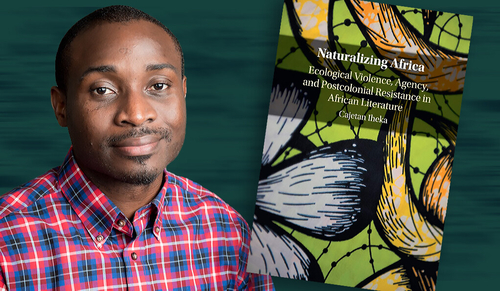 Yale faculty member Cajetan Iheka was an undergraduate in his home country of Nigeria at the height of unrest in the oil-rich Niger Delta in the 2000s. Militants were setting fire to oil installations and kidnapping oil workers in the region — one of the least developed parts of the country — in protest of the exploitation of their land. During his junior year, a professor introduced Iheka and his classmates to novels, poetry, and drama that depicted the Niger Delta oil crisis, igniting his interest in the environment and the ways that literature can guide or transform our thinking about it.

Today, Iheka, an associate professor of English in the Faculty of Arts and Sciences, uses African and other literature in his own classroom — and in his own writing — to inspire new thinking on environmental issues.

His most recent book, “Naturalizing Africa: Ecological Violence, Agency, and Postcolonial Resistance in African Literature,” highlights how literary texts call attention to human-caused environmental degradation on the continent, including the ways in which postcolonial struggles for liberation have contributed to it. He explores how African literature can help to enlighten us about different ways of seeing the world — especially the deep interconnectedness between humans and other beings — to help reduce ecological harm. The book was recently awarded the 2020 First Book Prize from the African Literature Association and received the 2019 Ecocriticism Book Prize from the Association for the Study of Literature and Environment.

Iheka, who is also a scholar in Yale’s environmental humanities program, recently spoke to YaleNews about the book, his teaching, and his belief that literature can create greater understanding of how to protect the planet and all the living things that share it.

What is the main focus of your research and teaching?

I see my classroom as a space where students can pay attention to questions of literary form, but I also want them to see texts as windows into the socio-political context of Africa. My classes offer a place for deconstructing and dismantling essentialist thinking about Africa. Fundamental to my teaching is to get students to think of the ways that the continent’s cultural expressions foreground the complexity of Africa and its people.

You speak in “Naturalizing Africa” about how literature can move us away from a view that humans have primacy in the world. Can you share your thoughts on that and how it relates to the environment?

I argue in my book that “people” in African cultures include human and nonhuman beings. I illustrate the ways in which African literature pays attention to the interconnection between humans and nonhumans. Nonhumans include trees, land, water, and animals.

I use the term “aesthetics of proximity” to describe the ways human and nonhuman connection is portrayed in African literature. In that way, when we think about the victims of oil exploration, we’re not just thinking about humans but also animals. When we think about casualties of war, we aren’t just saying 10,000 people died, but we are also thinking ecologically, broadening our conception of victims and casualties and considering this entanglement of humans and nonhumans.

This also means thinking about nonhumans as agents in this world, in the way they move us, push us to do things, and have an impact on us. For example, in some African cultures water is considered the home of supernatural beings — deities and gods. With that connection of the human and the divine, water takes on greater meaning and significance, a sacredness.

Do you see a parallel between that and the way Native American and other indigenous cultures see the world?

As we confront the climate crisis, as we deal with global warming and climate change, indigenous cosmologies — the way they see the world — become very useful. When we think of ourselves as being in relation with others — other human beings and nonhuman beings — we might better conceptualize how we live and how we treat other people.

In my work, I ask that we pay attention to vernacular ways of thinking about the environment and nature. When we do that, we don’t just see Africans or indigenous people as victims of displacement or capitalistic exploitation. We see them as producers of valuable knowledge that can guide us in our thinking about the future.

What are some of the literary texts that help to illustrate these cultural and environmental connections and concerns?

I also analyze African texts in which nonhumans become speaking subjects and agents. The argument has always been that humans are superior because of their linguistic abilities and because they are rational beings. African writers have always destabilized these boundaries. In “The Palm-Wine Drinkard,” a novel by Amos Tutuola, a man goes into the bush, where he encounters various creatures. As he goes, he finds animals, spirits, different beings with whom he interacts. Ultimately Tutuola’s work confronts the limits of the human. Such texts are productive for pushing the boundaries of the novel genre and the meaning of the environment as well.

Another example is the memoir “Unbowed” by the Nobel Peace Prize-winner and founder of the Green Belt Movement Wangari Maathai, who worked to save Kenya’s forests by planting trees. This text illustrates the process of reforestation and the way it became a kind of resistance from the ground. In planting trees, she is treating the environment as a commonwealth, not as individual property. She is also empowering other women, who depend on the forest for food and who tend to be at the center of exploitation, to recuperate their agency by planting trees to build a future for themselves.

How might literary texts help to transform how we care for our environment?

Literature affords an ability to move us beyond the constraints of history or exact science. Its shape-shifting ability enables imaginative possibility. It allows stories to reach the human part of us, in a way that pamphlets or textbooks may not.

In postcolonial societies such as in Africa, literature can give us a view from the ground. It gives us the ability to zoom in on characters’ lives and look at everyday life, for example.

Literature also makes space for empathy and connection. If you read a news story about an oil explosion in the Niger Delta saying thousands of people died, you can feel for these people. But in following characters in stories, we become distant friends, and that makes empathy possible. Novels, for example, allow a long-term view, and can help us to imagine ethical solutions. This is important as we think about such environmental questions as contamination from uranium mining or dumping of toxic waste or oil pollution.

I believe that the humanities in general, and literature in particular, have a stake in the world and our conversations about it. To that end, I am delighted about Yale’s Planetary Solutions Project and look forward to seeing the humanities play a crucial role in the project.