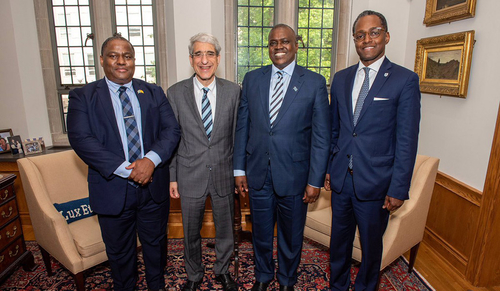 President Mokgweetsi Masisi of the Republic of Botswana and a delegation including First Lady Neo Jane Masisi visited Yale on June 6 for a series of meetings aimed at developing partnerships that would offer opportunities for research and capacity development in several different areas. The visit was facilitated by Kefentse Mzwinila ’99 M.A., minister of land management, water and sanitation services.

In a meeting with Ann Kurth, dean and the Linda Koch Lorimer Professor of the School of Nursing, Masisi noted, “Nurses serve a critical function in our health delivery system, often as the first point of contact for a patient.” They also discussed the importance of considering individual health, environmental quality, and growth through the perspective of planetary health.

Masisi discussed economic policy with Ernesto Zedillo ’76 M.A., ’81 Ph.D., director of the Yale Center for the Study of Globalization. He noted the urgency of his quest to transition Botswana from a resource-based to knowledge-based economy while speaking with Mushfik Mobarak, professor of economics, who through his research conducts field experiments exploring ways emerging economies adopt technologies or behaviors that are likely to be welfare improving. Botswana’s economic success has been built on a foundation of diamond exports, and Masisi plans to leverage this success to develop new sectors less dependent on the mining of natural resources.  He noted, “It’s my duty to provide the conditions necessary to realize our aspiration for a knowledge-based economy — and this can be achieved through mutually beneficial partnerships with institutions like Yale.” 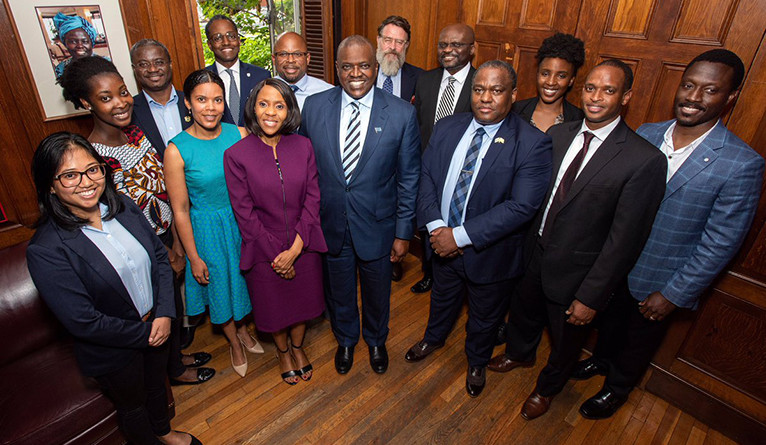 Masisi said he was pleased to learn about the Yale Young African Scholars Program, an intensive academic enrichment program designed for African secondary school students planning to pursue higher education and who wish to make meaningful impact as young leaders on the continent. Like many African countries, Botswana maintains a demographic dividend through a relatively large youth population.

Masisi and his delegation then visited the Yale School of the Environment for a roundtable conversation with students and members of the school’s faculty hosted by Marian Chertow, asssociate professor of industrial environmental management. During the exchange, Masisi emphasized Botswana’s support of the United Nations’ Sustainable Development Goals and his interest in strengthening environmental management, in order to achieve a more sustainable economy. He expressed a commitment to the integration of sustainability principles in educational curricula so young Batswana adopt sustainability-oriented practices in the stewardship of their natural environment. 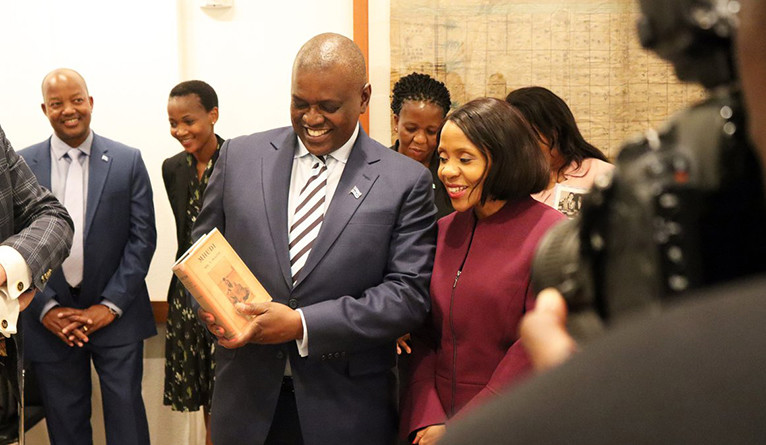 On a special tour of the Beinecke Rare Book and Manuscript Library Masisi was shown a selection of materials from the collection, including a copy of “Mhudi: An Epic of South African Native Life,” written between 1917-1920 by Solomon Tshekisho Plaatje; it was one of the first published African novels and the first novel by a black African published in English.

The visit concluded with a meeting with President Peter Salovey, who reiterated his commitment to engage with partners across Africa as part of the Yale Africa Initiative, a university-wide effort announced at his inauguration in 2013 aimed at fostering new directions in research on Africa, identifying new partnerships, and strengthening recruitment efforts — all while emphasizing teaching and learning. Both leaders reaffirmed their commitment to exploring opportunities for greater partnerships resulting in collaborative research, training, and learning exchanges that offer benefits to both Yale and Botswana.