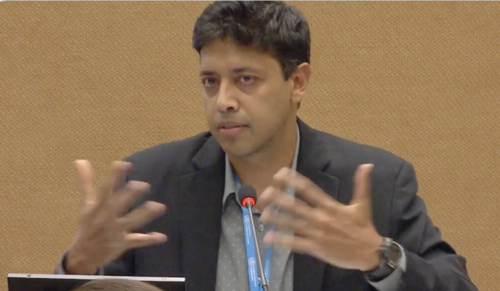 Professor Ahmed Mushfiq Mobarak, a development economist and an expert on the use of behavioral science to encourage the adoption of welfare-improving behaviors and technologies, spoke about his work at the World Health Organization’s 75th World Health Assembly in Geneva on May 27.

At the invitation of WHO director general Dr. Tedros Adhanom Ghebreyesus, Mobarak spoke at a session titled Strategic Roundtable: Behavioural Science for Better Health, alongside Dr. Soumya Swaminathan, the organization’s chief scientist, and the ministers of health of Malaysia, Canada, and Qatar.

“Those of us in the public health world often make the mistake of thinking that science and evidence alone are enough to convince the public and policymakers to follow our advice,” Tedros said, “How often we are proved wrong. The COVID-19 pandemic has been a powerful demonstration of the need to engage communities, understand their concerns and motivations, and adapt strategies accordingly.”

The challenges faced by public health authorities in persuading the public to wear masks and be vaccinated during the pandemic have not surprised Mobarak and his colleagues, he noted. “There’s this big puzzle in development economics that for many important classes of development challenges, we have products, technologies, behaviors that the engineers, the doctors who came up with it, the technicians, they really believe in it, it works well in the lab. We take it to the field, we try to get people to adopt—nothing.”

Mobarak described the behavioral factors limiting the adoption of technologies in the developing world, and his field work testing interventions informed by behavioral science, including a widely recognized study on encouraging the use of masks in Bangladesh and a current study examining last-mile delivery of vaccines.

While in Geneva, Mobarak met with health officials and the behavioral science team at WHO led by Dr. Elena Altieri to discuss collaborations between governments and Yale Research Initiative on Innovation and Scale (Y-RISE), where Mobarak serves as faculty director.