Reckoning with Empire: The Right to Self-Determination in Historical View 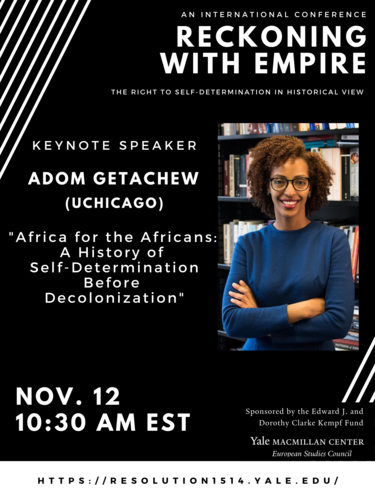 On November 12-13, Yale will host an international conference on decolonization (website). The conference celebrates a historic occasion—the 60 th anniversary of UN Resolution 1514, “Declaration on the Granting of Independence to Colonial Countries and Peoples.” Not only was Resolution 1514 a key moment in terms of codifying the international right to self-determination. It also marked a turning point in the history of anticolonialism. While gathering for the conference, titled “Reckoning with Empire: The Right to Self-Determination in Historical View,” more than thirty international scholars will investigate the afterlives, precedents, and consequences of Resolution 1514.

Key questions of the conference include: What was the international context in which activists, hailing from the global South and North, devoted their time to Resolution 1514’s passage? How did Resolution 1514 transform the varied political landscapes of the midcentury? And how did the Resolution not only feature in the world’s fights for national-liberation, but also impact a diverse set of social justice movements—such as those focusing on racism, imperialism, and economic oppression.

Conference organizers, Professor Samuel Moyn, Henry R. Luce Professor of Jurisprudence at Yale Law School and Professor of History at Yale University, and Charlotte Kiechel, PhD candidate in the History Department, noted how contemporary audiences, as well as historians, have yet to fully engage with the significance of Resolution 1514’s passage. “Resolution 1514 was a pivotal moment in the long struggle against empire, and it electrified the world, with many unsuspected consequences. Indeed, even today, its legacy is not exhausted,” Professor Moyn reflected.

A highlight of the conference will be the keynote address, which Professor Adom Getachew will deliver on Friday morning. A political theorist, the Neubauer Family Assistant Professor of Political Science at the University of Chicago, and a Yale alumnus, Professor Getachew works on the history of political thought, theories of race and empire, and postcolonial political theory. She is the author of Worldmaking after Empire: The Rise and Fall of Self-Determination from Princeton University Press (2019) and co-editor, with Jennifer Pitts, of the forthcoming W.E.B. Du Bois’s International Writings. The keynote address is titled “Africa for Africans: The History of Self-Determination before Decolonization.”

The conversations on Saturday, November 13 will be just as dynamic. Yale History professors, David Engerman, Leitner International Interdisciplinary Professor of History, and Timothy Synder, Richard C. Levin Professor of History, will be chair individual panels. Saturday’s panels include reflections on how midcentury activists used the language of Resolution 1514 on the floor of the UN; conversations on how U.S. civil rights activists also called upon Resolution 1514’s tenets; and questions on how the Resolution changed the laws of war in the second half of the twentieth century.

The European Studies Council at the MacMillan Center and The Edward J. and Dorothy Clarke Kempf Memorial Fund are sponsoring the conference. Please note that the 60th anniversary of UN Resolution 1514 fell on December 14, 2020. However, due to the pandemic, Yale is celebrating this occasion in 2021. If you are interested in attending, please fill out the “Conference Registration” form. We are pleased to be able to offer a dynamic program and look forward to seeing you over Zoom.