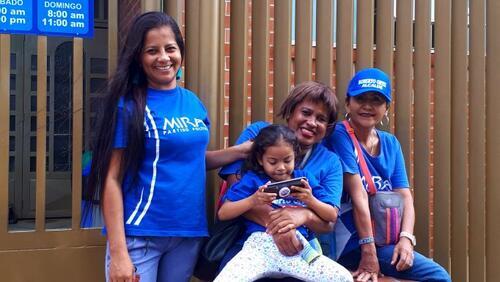 How do religious discourses shape our understanding of men’s and women’s roles in the home and the world? We investigate the differences between Catholic and Pentecostal gender discourse with a survey experiment conducted in Colombia.

Evangelicals have recently made headlines across the Americas. In the United States, they have typically been single-issue voters – against abortion – and so became steadfast supporters of Donald Trump. In Brazil, Evangelicals’ support was essential to installing Jair Bolsonaro, a fierce opponent of LGBTQ rights, in office. In 2016 and 2017, Evangelicals in several Latin American countries -including Colombia, Peru, Mexico, and Argentina- mobilized against same-sex marriage legislation and school curricula that contained progressive gender paradigms, including teaching the difference between biological sex and socially constructed gender.

Yet, Evangelical Pentecostalism may achieve precisely such changes. How? Some scholars argue that the answer lies in the content of religious discourse on gender. Pentecostalism prescribes more equal roles and responsibilities for both men and women within the family and the household. It takes aim at machismo, and seeks to break down the designation of the public sphere as masculine and the private sphere as feminine.  Neopentecostalism – the newest and most widespread variant of Pentecostalism– is especially popular in the region today, and emphasizes a theology of material well-being. Significantly for our purposes, it valorizes women’s participation in non-traditional roles, such as having careers.

The gender discourse of Pentecostalism becomes all the more surprising when contrasted with the Catholic Church’s long-standing model of femininity rooted in the Virgin Mary. In line with this model, Catholic discourse on women is predominantly limited to women’s roles in the private sphere as mothers. Scholars of Catholic gender doctrine have long claimed that such rhetoric undermines women’s equal participation outside the home.

In a study generously funded by the Tinker Foundation and the Center for Latin American and Iberian Studiesat Yale Unievrsity, we investigated the effects of these religious discourses on attitudes toward gender roles with a survey experiment carried out in Colombia with 2778 participants, who were randomly assigned to hear one of three audio messages presented as mini-sermons: either a Pentecostal or a Catholic message on gender roles and responsibilities, or a neutral message on a different topic entirely. We found that, relative to the control, the Pentecostal message caused  participants to display significantly more progressive attitudes regarding women’s and men’s roles within the home. In contrast, relative to the control, the Catholic message uniformly and significantly increased the conservativeness of participants’ attitudes regarding women’s equal participation at home, in the workplace, and in politics.

Just as important, when the treatments are compared to one another, the Pentecostal message had a universally progressive effect on attitudes across domains compared to the Catholic. These differences are also borne out in participants’ open-ended responses about Biblical expectations of women, analyzed using a keyword assisted topic model.

Exposure to the Catholic sermon also induced uniform responses regarding gender roles compared to the Pentecostal treatment. This indicates a treatment-induced norm tightening in the Catholic condition, where a traditional model of womanhood is broadly agreed upon and deviation may be punished.

Taken together, our results suggest that these Christian traditions differ markedly in their impacts on beliefs and norms about gender and in their potential for empowering women.

What are the wider societal implications of our findings? As Pentecostalism and secularism continue to draw followers away from the Catholic Church and the Marian model loses sway, we might see a parallel increase in women assuming non-traditional, public roles including in the workforce and politics. Alongside secular leaders, we might also see Pentecostals emerge as representatives of some important issues for women. Indeed, this is already the case in Colombia, Costa Rica, and Mexico.

The fact that Pentecostal leaders can effectively represent women on some issues might come as a surprise. Oftentimes, substantively diverse areas of representation for women are bundled together under the banner of “women’s issues”. However, disaggregating “women’s issues” into specific issue areas provides insight into the diverse logics of representation.  In the case of Latin America, several Pentecostal legislators have championed particular issues that often coincide with progressive agendas for women’s representation. While they oppose abortion and, frequently, LGBTQ rights, they have proposed and enacted legislation to provide subsidies and educational benefits to single mothers, guarantee equal pay for equal work, institute gender quotas in public agencies and candidate lists, and take aim at workplace harassment, among other issues. Our findings suggest that such actions could be explained, at least partly, by the elements of Pentecostal discourse studied here.

Many Latin Americans continue to be suspicious of western feminism, as they believe it is opposed to the family. At the same time, the majority of Latin Americans continue to identify as Christians of one kind or another, and describe religion as either “important’” or “very important” in their lives. In such a context, religious messages of the kind we presented in this study might have greater success in winning supporters to the cause of gender equality and women’s empowerment than secular feminism.

But while such a Pentecostal project for women’s rights may achieve significant gains in the domains discussed here, ultimately, it will be limited in its emancipatory potential due to the denial of bodily autonomy for women, evinced in its rejection of abortion rights.