Scholz and SPD move into the lead in German election campaign 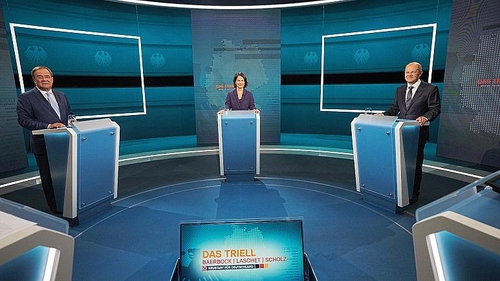 On September 26, German voters will go to the polls to elect a new Bundestag to replace the one elected four years ago. Over the past week, the Social Democratic Party of Germany (SPD) has moved into the lead over the Christian Democratic Union (CDU) and its Bavarian sister party, the Christian Social Union (CSU), in the polls, and the SPD’s chancellor candidate, Olaf Scholz, the minister of finance in Chancellor Angela Merkel’s outgoing CDU-CSU-SPD “grand coalition,” has opened up a substantial lead in the polls over Armin Laschet, the leader of the CDU, Minister-President of North Rhine-Westphalia, and CDU-CSU chancellor candidate—a lead that was capped by a strong performance in Sunday’s televised debate among the party leaders.

In Germany’s mixed-member electoral system, each voter has two votes—one for the representative of the constituency, the other for a party. 299 seats in the Bundestag are filled by those elected to represent the single-member constituencies and 299 (or more) additional seats are filled from party lists in each state according to each party’s proportion of the total vote in the state for all parties that get at least 5 percent of the country-wide party list vote or win three constituencies. Parties that win more constituencies than their party list share of the vote in the state would give them are allowed to keep the extra seats, which are called overhang seats. To compensate the other parties and ensure that the overall result is proportional, additional compensatory seats are awarded to those other parties. In 2017, 111 extra compensatory seats were allocated to the parties, resulting in a Bundestag that had a total of 709 members—299 constituency representatives and 410 from the party lists.

In terms of public support, the CDU-CSU has been on something of a roller coaster over the past two years. In the winter and early spring of 2020, fueled by the government’s response to the Covid pandemic, support for the CDU-CSU, as measured in the polls, increased dramatically from roughly 27-28 percent throughout much of 2019 and the first months of 2020 to almost 40 percent by May and June of 2020. But then after edging down a bit and leveling off at about 35-37 percent through the remainder of 2020, support dropped sharply to roughly 25 percent by May of this year. Support subsequently increased to almost 30 percent by early July. But since then it has again dropped sharply, and in the five most recently-published polls last week and earlier this week, 20-22 percent of the voters said they support the CDU & CSU, roughly 10 percentage points less than what they won in 2017

While the polls don’t identify the reasons for the fluctuations over time, if the dramatic increase in support for the CDU & CSU in the late winter and early spring of 2020 was fueled largely by the government’s forceful response to the Covid pandemic, the equally dramatic drop in support in the late winter and early spring this year may have been, at least to some extent, a consequence of the CDU having elected Laschet rather than Friedrich Merz as its leader in January and then, with the CSU, having selected him rather than Markus Söder, the Minister-President of Bavaria and leader of the CSU, as the CDU-CSU chancellor candidate in April. And there can be little doubt that the steep drop in support for the CDU-CSU since early July was caused, at least in part, by the widely-viewed photos of Laschet laughing and chatting while President Frank-Walter Steinmeier spoke on July 17 at a ceremony in Erftstadt, one of the towns hit hardest by the July floods, honoring those who perished and promising aid to those who survived. Laschet subsequently apologized but the damage was done.

The changes over time in support for the parties both influenced and were influenced by changes in support for the party leaders. In the late winter and early spring this year, when support for the Greens increased from roughly 18 percent to 25 percent, support for Annalena Baerbock, the Greens’ candidate for chancellor, also increased, and by April substantially more voters preferred her as chancellor than either Laschet or Scholz. But her candidacy encountered some difficulties, and by June Laschet had moved ahead of Baerbock and Scholz. But since late July, a substantial number of voters have moved away from both Laschet and Baerbock and now favor Scholz as the next chancellor. In the five most recent polls, Scholz is supported by 29, 30, 31, 34 and 49 percent of the voters. Baerbock is supported by 13-17 percent of the voters and Laschet by 10-17 percent of the voters in the five polls.

There are still more than three weeks of campaigning before the voters—at least those who don’t mail in their ballots—cast their votes. But from this early vantage point, it appears increasingly likely the SPD will, whether with the CDU and CSU, or with the Greens and the FDP, or with some other combination of those parties, form a new government and Olaf Scholz, rather than Armin Laschet, will replace Angela Merkel as chancellor.