The Struggle for Legal Abortion in Latin America 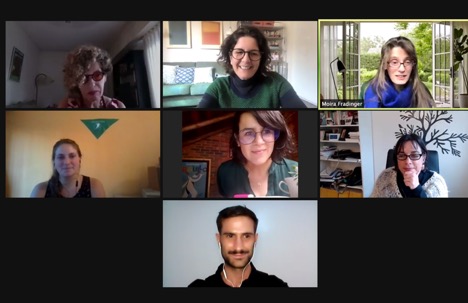 On February 26, the Latin American Interdisciplinary Gender Network (LAIGN) launched a special webinar series slated to be held on the last Friday of every month. Co-sponsored with the Council on Latin American & Iberian Studies (CLAIS) at the Whitney and Betty MacMillan Center for International and Area Studies at Yale University and Universidad Nacional Autónoma de México’s (UNAM) Center for Research and Gender Studies (CIEG), this first event featured scholars and practitioners who discussed the struggles related to legalizing abortion in Latin America. (View Video)

Welcoming remarks for the event were provided by Claudia Valeggia, chair of the Council for Latin American and Iberian Studies and Professor of Anthropology at Yale, and Moira Fradinger, Associate Professor of Comparative Literature at Yale University. Mabel Belluci, co-editor of the online site “Moléculas Malucas, Archivos queer y Memorias fuera del Margen” began the event with a presentation, entitled “The Struggles of the Sexual Disobedience Movements for the Conquest of Voluntary Abortion in Argentina.”  Belluci outlined the history of abortion in Argentina, the feminist movement’s foundational legacy of sexual liberation, and how the feminist movement precipitated the eventual legalization of abortion in 2021.

Suyai Lutz, a lawyer who specializes in Equality and Non-Discrimination (UBA) and member of the Abriendo Caminos de Argentina organization, honed in on the present state of the feminist movement’s battle for free and legal abortion in Argentina, with an emphasis on the 2018 green tide campaign. In her presentation, “The construction of the green tide (fight for legal abortion) in Argentina: learnings and challenges,” she explained the origins of the National Campaign for the Right to Legal, Free, and Safe Abortions in 2005 and the Draft Bill for Voluntary Interruption of Pregnancies that was narrowly defeated in 2018. Lutz highlights the unprecedented unity and diversity of the campaign and argues that this helped the bill eventually pass in 2020.

Ezequiel Bassa, Professor of Sociology and activist of the Collective of Gender-political Dissidence in the Campaign for the Right to Abortion in Argentina, narrowed in on the intersection between identity and feminism in his presentation, “Identities, feminisms and legal abortion in Argentina. Scopes, limits and challenges.” Moreover, he emphasized the need to ensure the implementation of the Voluntary Interruption of Pregnancies bill during COVID-19.

Viviana Bohórquez Monsalvez, a feminist lawyer with an LLM in Human Rights from the Central European University and a PhD in Law from the Universidad de los Andes, shifted the conversation from Argentina to Colombia’s struggles with legalizing abortion. Entitled “Colombia: 30 years of judicial transformations on abortion,”Monsalvez’s presentation briefly outlined the recent history of the feminist movement in Colombia, and its success in securing women’s rights to divorce and abortion. However, despite the legal right to safely acquire an abortion, Monsalvez explains the severe restrictions in abortion access, as well as the difficulties in actually implementing legalization that has passed within the nation’s healthcare system.

Francisca Pou-Giménez centered the event’s final presentation, “Judicial gradualism in the advance towards legal abortion in Mexico” on Mexico’s continuous and controversial struggle with legalizing abortion. Professor of the Department of Law of ITAM and member of the National System of Researchers of Mexico, she suggested that political pressures and interactions are integral to the legalization of abortion throughout Latin America. Although that progress has been made with legalizing abortion in Mexico, Giménez emphasized that greater legal advancement is necessary, both in Mexico and the rest of Latin America.

Following the presentations, the panelists participated in a lively and thoughtful Q&A session on the future of abortion in countries throughout Latin America.