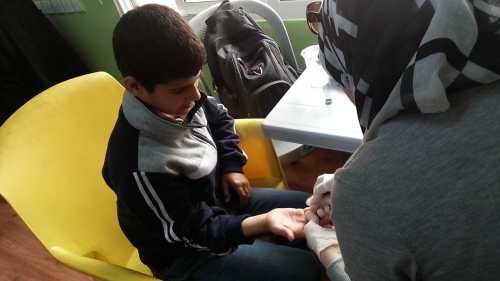 A new study demonstrates that an eight-week humanitarian intervention can improve the mental health and psychosocial wellbeing of Syrian refugee and Jordanian youth affected by Syria’s war.

The study, which will be published Oct. 2 in the Journal of Child Psychology and Psychiatry, showed that a psychosocial support program implemented by the global organization Mercy Corps in partnership with local community organizations in northern Jordan reduced levels of insecurity and mental-health difficulties of 12-18 year olds, both boys and girls.

In a randomized control trial, the researchers learned that the program most benefitted adolescents who had been exposed to four or more traumatic experiences. Regardless of past trauma, the program benefited the young people who expressed high levels of insecurity, which was measured in terms of worries and fears about oneself, one’s family, and one’s future.

The findings can inform strategies for identifying and targeting adolescents for psychosocial programming, the researchers said. They can also inform future research agenda, looking more deeply at the impact of bringing young people together from refugee and non-refugee host communities.

About 5.2 million people have been forced to flee the six-year-old conflict in Syria, and over 650,000 Syrians are now rebuilding their lives in neighboring Jordan.

There is a recognized lack of evidence concerning the effectiveness of mental health and psychosocial interventions for youth in conflict-affected areas.

The Mercy Corps program, launched in 2014 for Syrian refugee and Jordanian youth, is a structured program called Advancing Adolescents.  It consists of group-based activities and skills-building, led by trained adult coaches from the local area, designed to reduce the effects of profound stress and build strong ties to family and community.

“Adolescents have been largely overlooked in the Syria crisis, yet they represent the present and future of the region,” said Amie Wells, regional youth and adolescent advisor for Mercy Corps. “This study underscores the critical importance of continued investments in psychosocial support for youth as a means to build pathways to a peaceful, healthy and secure future.”

The researchers also found that, after one year, symptoms of poor mental health reduced in both youth who did and did not take part in the program. Those who engaged in the intervention, however, showed a sustained drop in feelings of insecurity. Their recovery was accelerated, relative to youth who did not participate in the program.

“These community-based programs are vital to help youth facing very difficult circumstances,” Panter-Brick said. “Research like this can help strengthen programs and improve the ways they are assessed. We can identify the key components of an intervention and evaluate what works best, for whom, over time. We also help by selecting the best measures with which to assess changes in stress, insecurity, and mental health.”

The researchers will share their findings at a meeting on research on mental health and psychosocial support in humanitarian settings, to be convened at the World Health Organization, in Geneva, on Oct. 2.  They will emphasize the lessons learnt during this research, particularly what matters for ensuring robust research and implementation in conflict settings, and the importance of academic and humanitarian partnerships.

“We were able to accomplish our research goals and better engage with Syrian and Jordanian communities because we established strong partnerships in the local context. This proved so important for conducting research in an ethical, participatory manner, as well as for enriching the research process with local knowledge,” said Rana Dajani, professor of biology at Hashemite University and local research team leader.

The study’s co-authors are Mark Eggerman, research scientist in global health and area studies at Yale’s Whitney and Betty MacMillan Center for International and Area Studies; Amelia Sancilio, graduate student in Yale’s Department of Anthropology; Rana Dajani, professor of biology at the Hashemite University in Jordan; Alastair Ager, director of the Institute of Global Health and Development at Queen Margaret University; and Sabrina Hermosilla, postdoctoral research fellow at Columbia University Medical Center. The research was funded by Elrha’s Research for Health in Humanitarian Crises (R2HC) Programme, which is funded equally by the Wellcome Trust and the U.K. Government.