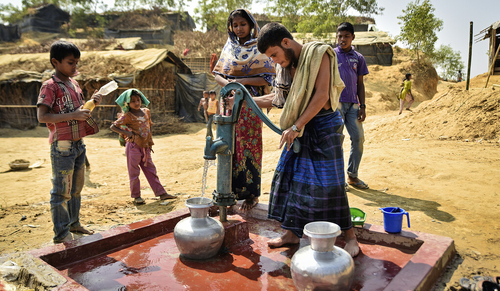 Widespread use of arsenic-contaminated water in Bangladesh during the 20th century has been called by the World Health Organization the largest mass poisoning in history. A new study co-authored by Yale economist Mark Rosenzweig finds that, in addition to profound health impacts, high levels of arsenic retention has caused a significant decline in the productivity, cognition, and earnings of Bangladeshis.

Throughout the second half of the century, Bangladesh began a nation-wide effort to switch their water sources to tube wells. These deep water wells that connect to underground aquifers were adopted in an effort to reduce the incidence of water-borne illnesses caused by using surface water sources. Years later, however, these tube wells were discovered to have been contaminated with arsenic in almost every Bangladeshi district. As a result, levels of retained arsenic found in the bodies of Bangladeshis ­— as measured in toenail clippings ­— are nearly 20 times the level of people in the United States.

Until now, much of the literature on this public health crisis has revolved around the health effects of arsenic retention, and previous related economic research primarily focused on the associations between arsenic poisoning and economic outcomes rather than identifying the causal effects.

Using molecular genetics analysis, Rosenzweig and his co-authors, Mark Pitt of Brown University and M. Nazmul Hassan of the University of Dhaka, however, were able to pinpoint the direct effects of the poisoning on economic outcomes such as productivity. Their article is forthcoming in the Review of Economic Studies and has been published online.

“Reading the existing literature, it’s all about correlation,” said Rosenzweig, the Frank Altschul Professor of International Economics. “We’re not the first to measure concentrations of arsenic in people’s bodies in Bangladesh and its correlation with economic outcomes, but using the molecular genetics identification strategy, we can identify the causal effects.”

The researchers’ novel approach uses an understanding of molecular genetics focused on particular genes that can protect against retention of arsenic in the body. “There are three alleles [variant forms of a gene] associated with the methylation of arsenic, so if you have these particular alleles, you’ll be able to methylate arsenic, that is, secrete it out,” Rosenzweig explained. “Because there are these genes, there’s going to be family correlations of this ability to methylate.”

Since these genes are shared within family lineages, the researchers could predict an individual’s level of arsenic by looking at the levels found in their family members living in different villages while controlling for other variables.

With data that followed individuals from 1982 to 2008, the researchers were able to identify the extent to which retained arsenic has affected economic outcomes for the people of Bangladesh. For instance, they found that reducing arsenic retention by one standard deviation would improve performance on a nonverbal intelligence test by 24%. Similarly, this arsenic poisoning also caused lower schooling attainment, especially among younger Bangladeshi men who would have been exposed to the arsenic at early ages in contrast to older cohorts.

Bangladeshis also saw the impact that arsenic poisoning had on their job prospects. If the amount of retained arsenic in their bodies was halved, the researchers found, the number of young men who took on high-skilled labor, including in medicine or business management, would grow by 24%. Similarly, it would boost the number of young male entrepreneurs by 26%.

Rosenzweig and his co-authors were mindful of the impact that arsenic-contaminated water would have on women as well. The Bangladeshi formal labor market — that is, the market where people work for wages — is largely composed of men, meaning less data are available about women.

Despite this, the researchers identify positive economic benefits for women, too, including a boost in productivity, if the level of arsenic in their water sources were reduced. Women, however, are also responsible for home-production, which includes collecting water for their households. The provision of non-contaminated water in the home would therefore reduce their time spent traveling greater distances to source clean water.

While the effects of such arsenic poisoning are significant, they are not easily discernible to the naked eye. Lack of access to proper sanitation and hygiene resources in Bangladesh has increased the prevalence of similar morbidity symptoms caused by other illnesses, making it difficult to isolate the effect of arsenic from other ailments. This is what led the team to identify these economic impacts as the “hidden” costs of using tube well water.

“It’s actually pretty difficult to visibly discern the symptoms of arsenic poisoning from other ailments for people in Bangladesh, but it could still be affecting them,” Rosenzweig said. “Getting the true productivity effect has previously been neglected in the literature, so the key thing here was to get at the causal impact of arsenic.”

A detailed summary of the findings can be found on the Yale Economic Growth Center website.

Written by Aiden Lee, an economics major in Yale College and intern at the Economic Growth Center.