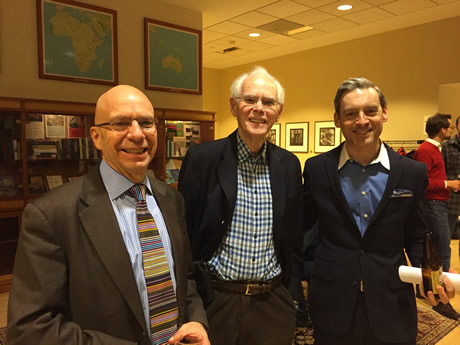 Last night 80 graduate students, visiting scholars, and faculty packed inside the second floor of the MacMillan Center for a special Super Tuesday election event.  Many of the attendees traded thoughts on the upcoming primaries and caucuses, others sipped their drinks as they watched the large projector that kept a live feed of the elections results, and some even spent time imitating their favorite candidates, from Bernie Sanders to Donald Trump.

Ian Shapiro, Yale’s Sterling Professor of Political Science and Henry R. Luce Director of the MacMillan Center, said, “I thought that Super Tuesday this year would be sufficiently interesting to warrant its own event.”  He was quickly proved correct.

The evening was lead by Shapiro, Jacob Hacker, Stanley B. Resor Professor of Political Science and the Director of the Institution for Social and Policy Studies, and David Mayhew, Sterling Professor Emeritus of Political Science at Yale.  They each periodically provided expert commentary as polling results came in from the eleven Super Tuesday states.

“This is a big night,” Mayhew began.  “About a third of the delegation will be decided.”

He predicted that Hillary Clinton and Donald Trump would fare well – and fare well they did; both captured seven of the eleven elections.  But Mayhew placed emphasis on two states in particular: Massachusetts for the Democrats and Virginia for the Republicans.

“Hillary Clinton does not have Bernie entirely put away.  Watch to see if she takes Massachusetts.  If Bernie Sanders loses, it’ll be very bad for him,” he said.

“If he can’t take Massachusetts, it’s over,” he proclaimed.

And Clinton took Massachusetts by a tight 50 to 49 margin, a result that, according to Mayhew, suggests the Bernie Revolution will be short-lived.  But perhaps the one point differential is tight enough that Sanders can make a comeback.

On the Republican side, Mayhew drew the audience’s attention to Virginia.

When Trump prevailed over Rubio in a 35 to 32 contest in Virginia, Mayhew said, “His chances of winning are no better than 10 percent.  Trump will probably win the nomination.”

Although, here, Mayhew only mentioned Donald Trump in passing, the real estate mogul and The Apprentice star could not escape Hacker’s mind.

“The lack of response from the Republican establishment [against Trump] has been the big story,” Hacker told the crowded room.

Hacker, seemingly disillusioned with Trump’s success, recounted a story in which he met “The Donald” last year.  Trump asked Hacker whether or not he could win the election, and Hacker consistently scoffed at the possibility.

“I’m already disqualifying myself as a commentator,” Hacker laughed.

Throughout the night, he tried to explain why the GOP, which nominated Governor Mitt Romney and Senator John McCain in the past two contests, has been unable to stop Trump.  Hacker ultimately concluded that his cult of personality and his identity as an outsider make for strong appeals to disillusioned voters.

“This is the rise of an individual,” he analyzed. “The appeal of Trump is that he’s beyond politics, that no one in Washington can do anything right.”

“What we do see with Trump is bombastic nationalism, antipathy to political correctness, and an aversion to economic regulation,” he shared.